How It Is #2: My Story of Postnatal Depression

This is the second post in a series on my experience of postnatal depression. The first is here. 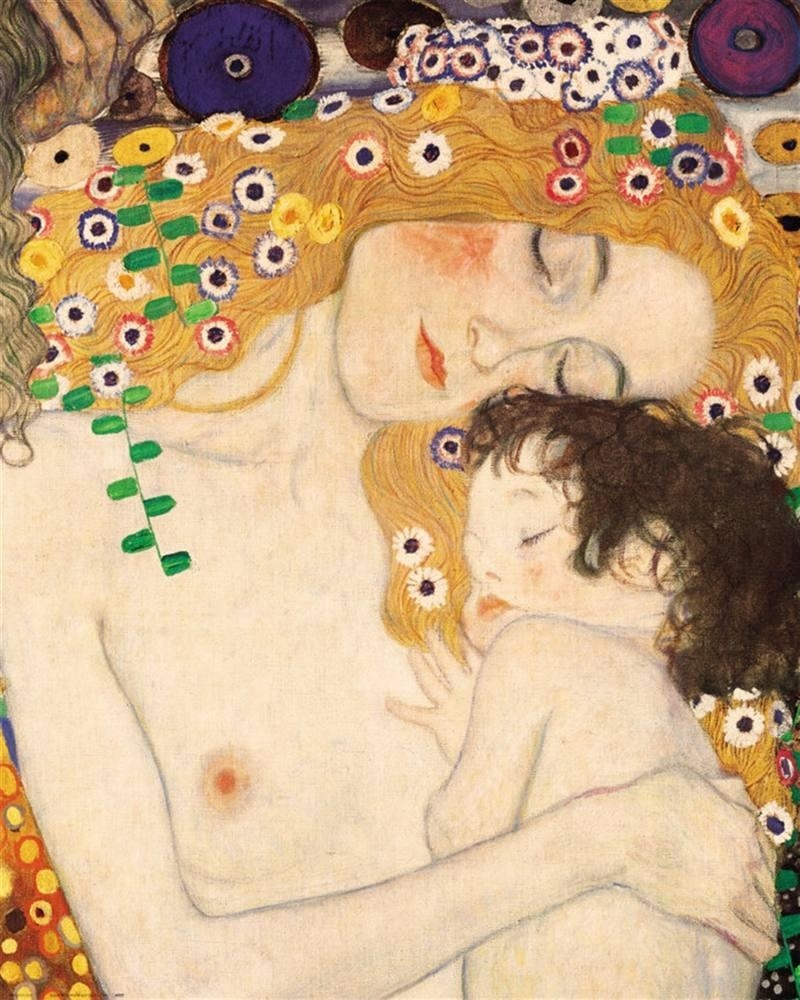 Detail from The Three Ages of Woman, Gustav Klimt

I was quietly terrified about childbirth. So unknown! So dangerous! But I was very lucky. Despite a slightly rocky late pregnancy, I had a pretty positive labour and birth experience, and then a very happy first few days of SBJ’s life. (I like to tell people that childbirth really was fine, totally doable. There’s not enough of that in conversation to balance out the hard stories.)

The ‘baby blues’ affect up to 80 per cent of new mothers, as post-birth hormones take their emotions for a mountain bike ride, around days three-five. The baby blues are perfectly normal and pass on their own, but it felt great to get to day five without having been at all sad. I thought things were working out much better than feared, and the good care I’d been given had done the trick.

Until the hip check. In New Zealand, babies generally have their hips checked in the first few days of life to screen for congenital hip defects. In our region this is done by the orthopaedic consultants themselves, which is an unusally good service. By the time our appointment rolled around, SBJ had had his ears tested twice, had his heel pricked for the Guthrie blood test and been weighed and measured twice, so I was a bit blase about the whole thing.

It was also our first set appointment since we’d come home from hospital, so I was mostly focused on getting us out the door on time. I’d given no thought at all to what the test was about. So it was a shock, less than a minute after meeting the consultant, to hear that SBJ had a ‘clunky,’ dislocatable hip that ‘fell right out the back’ and he would have to wear a von Rosen splint for eight weeks. 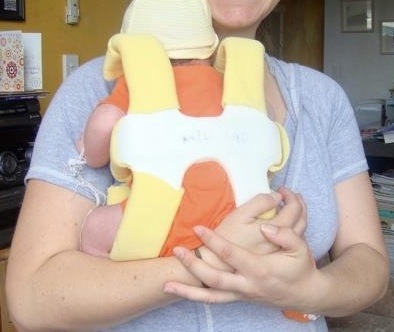 SBJ in his von Rosen hip splint, around a week old

What?! At this point (45 seconds after entering the room) the consultant moved on to the next baby, passed us onto a nurse, who left the room and told us to wait. Anyway, let’s cut the story short to say that the suddenness of this news and the adjustment to having my tiny baby fitted with an aluminium body splint that we weren’t allowed to take off for a second was the trigger for a very low day.

Which turned into a very low week. I knew that we were lucky SBJ had been diagnosed and treated early by skilled professionals. Without the splint he would have walked with a limp his whole life and needed surgeries through childhood. And I wasn’t really worried about the substance of what was happening; I’m a fan of medical care. It was just a very traumatic half-hour that I wasn’t prepared for, and it was enough to send me spinning.

And I didn’t bounce back. So having got through the ‘baby blues’ period unscathed, I entered the postnatal depression (PND, or postpartum depression, PPD, in North America) era, and became a stranger in my own head.

Everything else with SBJ went very smoothly. His father was a champion at looking after us both (the baby was a month old before I’d changed enough nappies myself to hit double figures), breastfeeding went pretty smoothly, and SBJ figured out the difference between day and night quickly, so was fairly settled through the night, just waking for feeds. All three of us bonded really well.

That’s worth dwelling on for a moment more, because one of the hardest things about PND for many people is that it often disrupts the attachment between mother and baby. This was not our experience, thanks be to God. As I explained to people at the time, SBJ and I were great. It was just the rest of the world I wasn’t so sure about.

In those early days, my experience was partly about feeling down and crying easily, but more characterised by easily feeling overwhelmed, not being very resilient if things went wrong, and feeling like my brain had gone on a sabbatical and left me behind. 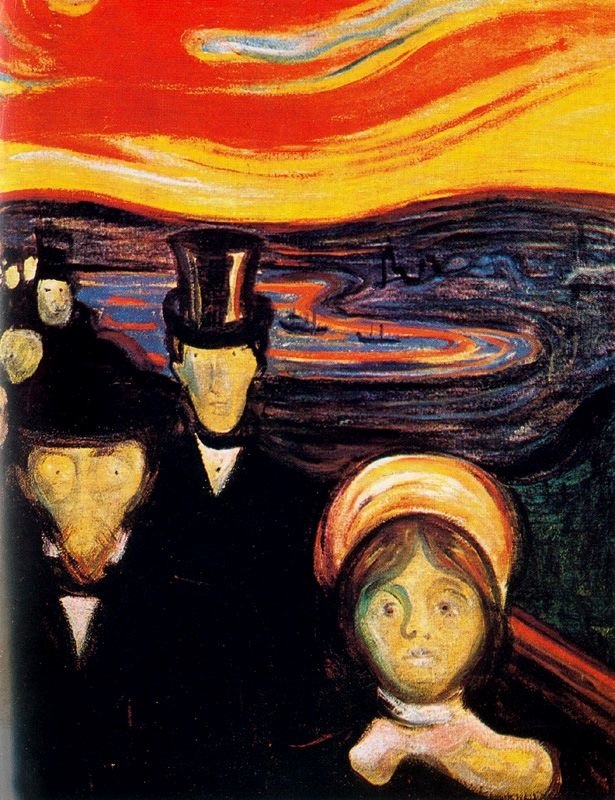 It was really hard to make decisions. Like: I know I need to feed the baby and I need to change him and I need to eat. Which shall I do first? That kind of every-hour-or-two decision was just paralysing. I would sit there holding SBJ, not knowing what to do next and getting more and more anxious.

I found conversation very difficult. It was hard to concentrate on the thread of a conversation, and more than a couple of people around at once was overwhelming.

Something I found particularly frightening was that things didn’t reset in the morning. Before, like most people, if I’d had a bad day, I would know that I’d get a fresh start when the sun came up. But that wasn’t true anymore. I would wake up, think about the day, and worry, while still in bed, about putting the washing on and juggling everything else – even when my husband was home and taking care of everything perfectly well.

I also had a lot of trouble arranging my thoughts and finding words. I lost the thread of my paragraphs. I started stuttering.

What was most disconcerting about all of this is how foreign it all felt. Before I was pregnant, I was a church minister, where I had dozens of projects and issues and conversations going on every week. I was a go-with-the-flow, good-in-a-crisis kind of person, and I thrived on people contact. I was articulate and smart. So who was this damp, sad, tongue-tied, frightened person on the sofa?

It was in this period that the Maternal Mental Health Service at the hospital were particularly wonderful. One of the team visited every few days, and we worked out approaches and solutions to things that were hard and talked through how we were all feeling. They would reassure me that SBJ was thriving and we were doing a good job. We were extremely lucky to have them.

I went steadily downhill for the first few weeks, and that’s when I started on medication, which I don’t feel like talking about right now, but maybe soon. Also to come: how to help, what to say, things that helped me get better, how I experienced God in the fog and more.

I’m open to your questions as this series continues, so feel free to ask something in the comments below, or offer your own experiences. And God bless all of you in the darkness right now.

This is the second post in a series reflecting on my experience of postnatal depression. Feel free to head also to How It Is #1, How It Is #3: What to Say and How It Is #4: On A Bad Day, and please pass any of them around, if they’re helpful, using the share buttons below. 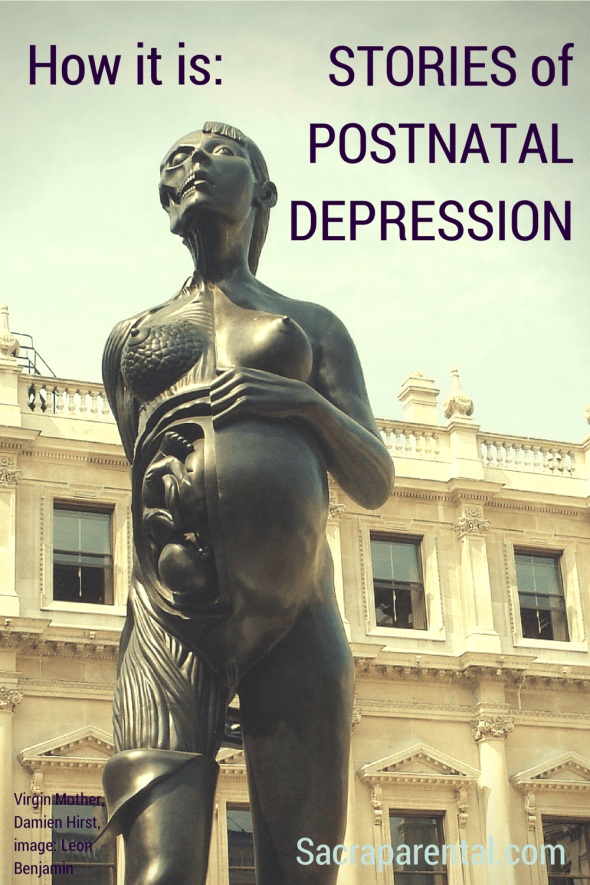 21 comments on “How It Is #2: My Story of Postnatal Depression”