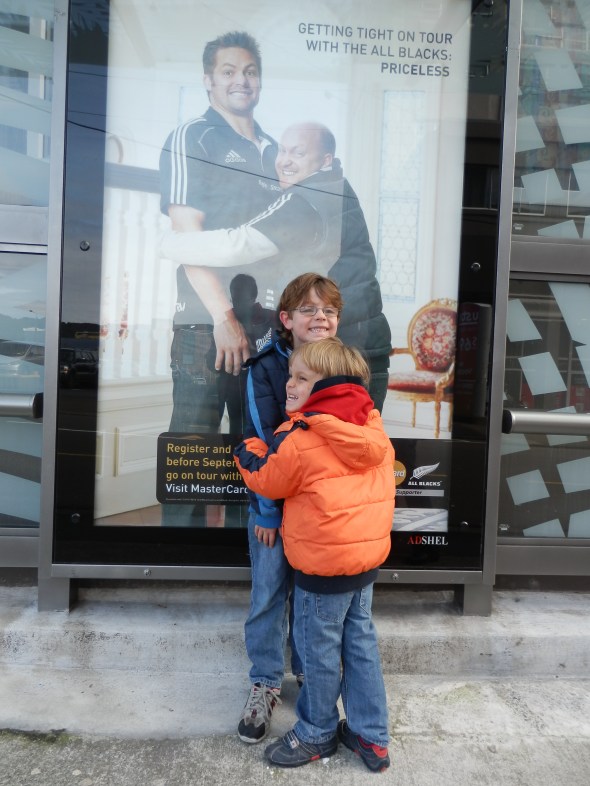 Now we just need to get this to Richie, if anyone can help!

I sometimes feel like the third wheel in my own family.

As the only female surrounded by boys there is a definite imbalance of hormones – but I wouldn’t actually trade that for the world. I love having two sons, I couldn’t imagine having a daughter, I wouldn’t know what to do with pink and dolls and fairy wings (I know, I know, stereotypes and all that!)! But sometimes I find myself dwelling on my role in this group of four and I know it has changed so much already from my beginnings as a mother a mere seven-and-a-half years ago. At times it’s as if I’m on the outside of the window looking in and enjoying what I see but realising I’m not really a part of it all and longing to be allowed into the inner circle. Clichéd? Maybe, but true none the less.

Jonah, at four, is still a mummy’s boy and I adore being the most important person in his world. It fills me with a sense of being needed, and loved for who I am and what I can provide for such an amazing little person. He stills hugs me at will and holds my hand as we walk along, chatting about anything and everything for, unlike myself, Jonah is a natural conversationalist. Sometimes I’m sure I squeeze his hand a little harder than necessary because I know before too long he will start to loosen his grip.

Ben is at that age (almost seven! When did that happen?) where he is releasing his hand from my grasp and forging a stronger, and most necessary, relationship with his dad. I knew this would happen about now, when all of a sudden dad couldn’t get any cooler, and time spent with him is exciting, adventurous and full of new found knowledge and experiences.

Michael is amazing at fulfilling this role. The boys go on missions to find wood to build skate ramps; swimming is no longer just pootling about the pool but involves bombs, flips and other adrenaline crazed water-entrances that make me screw my face up in an unflattering manner and avert my eyes, whilst uttering some sort of pained noise that sounds a bit like “shsh” or “irrhh” or something equally difficult to express on paper! Their birthdays now come not just with cake, parties and presents, but with “Daddy’s Day Out” or “Daddy’s sleepover”. Both boys adore their father, and rightly so, because he loves them fiercely and unconditionally. It makes me proud when others comment on his naturally close relationship with his sons as I know they are wondering how he does it, and wishing they could have that with their own children. Actually, it’s not rocket science; he just happily invests because he understands they are the most important ‘things’ in his life!

I am an introvert, and with that comes a desire, no, a need, to have time to myself. Some days, when the boys wave to me from the back of the car as they zoom off with dad to do something I don’t understand, I love being able to close the front door and hearing nothing but silence. I love being able to potter about the house doing whatever takes my fancy – reading a book; checking out what is happening in my alternate world on Facebook; singing along to almost every word of Les Mis at a slightly louder than neighbourly volume; indulging in some baking, that sort of thing.

But on other days, watching them go just leaves a gaping hole in my day and tears in my eyes. For, you see, I like to be able to choose my moments of solitude. I don’t always want to be the one left behind. Sometimes I want to be the cool parent, the fun parent, not just the one who has to stay home and make tea. But then I battle with my inner self as to whether I would do a good enough job if I tried to whisk them off for some spontaneous fun (actually, it wouldn’t be spontaneous for me as I would have had to plan it to the nth degree just to make sure I gave them a nice surprise) and usually decide it was probably for the best that I didn’t go. I need to find peace with my role in their lives.

It’s Friday today, the first day of the weekend here, and one of two chances in a week for me to sleep in. My alarm is set for 5.50 during the week to allow me time to get everything done before bundling the boys into the car at 7.20 (usually after much despairing and nagging to brush teeth and get shoes on). At the weekend if my first blurry glance at the time on my mobile sees a number starting with 7 then I smile. But whilst it was still dark this morning I was woken by the sound of “mama…Mama…MAMA”. I crawled out of bed and went to see Ben. He had had a bad dream and needed comforting. It had involved swimming pools and carnivorous plants and, if I understood fully in my sleepy fog, me throwing in a cucumber to try and poison the plant but failing. I’m sorry about that son.

So he came back into our bed and cuddled up there, feeling safe and secure. Michael looked at his phone – ironically, it was ten to six! But I didn’t feel annoyed or grumpy, I felt loved. For in his moment of fear Ben had called out for me. His first instinct was still to run, figuratively, to mummy and she would make it safe again (even if she can’t wield a cucumber!). As Ben tucked his arm through mine and curled up next to me on the bed I silently cried a rather disproportionate number of tears for the occasion, and held on to him for dear life!

Hi, I’m Jenny and I have the great privilege of being Sacraparental’s first guest writer! I never expected that when I jotted down a few ramblings this morning. This is much better than the upkeep of writing my own blog, so thanks for the opportunity to steal your limelight Thalia! Enjoy your day off and put your feet up with a cuppa.

6 comments on “Apronstrings and Dreams [Guest]”