Magic Words #1: Be Thoughtful about that Sheer Drop 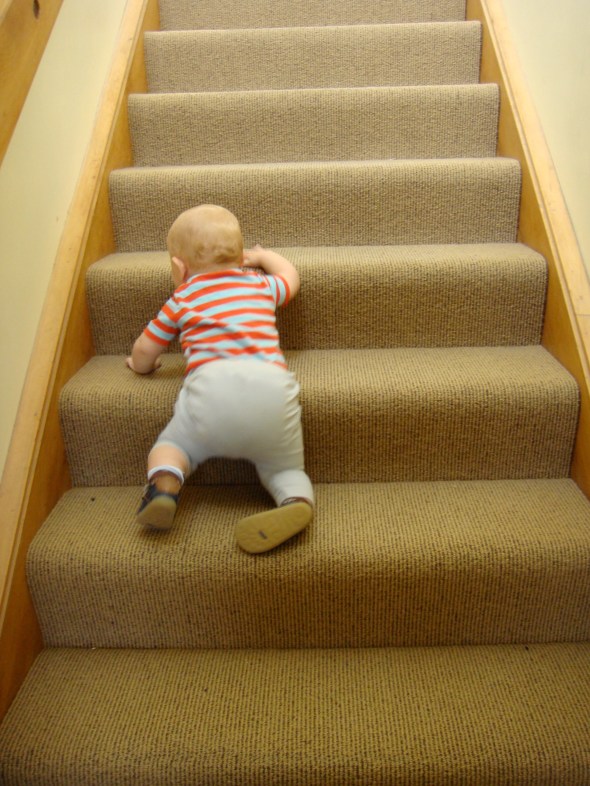 When my baby started moving around and exploring, I heard myself saying ‘Be careful!’ an awful lot.

My husband and I are pretty relaxed about SBJ taking risks and maybe getting a bit bumped. We don’t make a fuss if he falls over (when he falls over) and mostly neither does he. Our standard has developed from my husband’s work in emergency departments. We’re very careful about carseats, heaters, baths, that sort of thing. But if SBJ is doing something that looks a bit dodgy, and the dad says ‘kids don’t turn up at hospital having done that’ then we tend to let gravity take its course.

It’s totally fine if this is not be your standard! But it works for us (though I’m obviously over-simplifying). We’ve taken note of the downsides of helicopter parenting (ain’t that just a whole nother post), and we’ve decided to encourage SBJ to explore and be adventurous rather than aim for caution. His dad and I are both quite cautious people (in some ways) and we’d love to foster a bit more boldness in him.

So I decided that ‘Be careful!’ was not the message I wanted to send. Not 134 times a day. 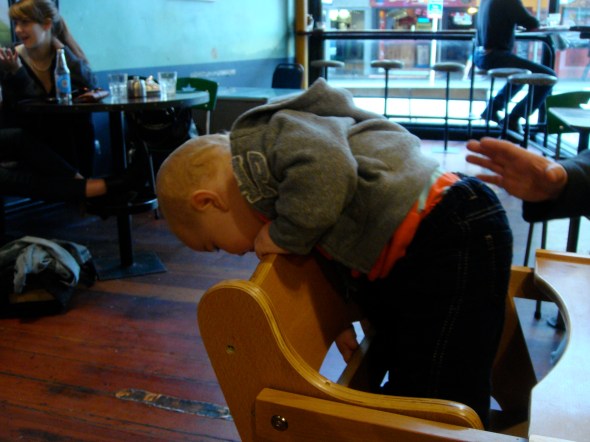 The moment SBJ’s experimenting with standing in a highchair crossed the line into foolishness. A second later he tries to dive off and his dad catches him.

Perhaps as a vestige of my native extraversion, I talk to SBJ all the time. When I spent a morning at home by myself recently, I found myself commentating my actions out loud as usual, much as parents of newborns often rock gently from side to side whether there’s a baby in their arms or not. I told the empty house, ‘I’m just going to put the washing on, but I don’t think I’ll hang it outside today. It looks like it might rain.’ Then I realised I didn’t have an audience.

I’m constantly talking to SBJ; a mixture of commentating what we’re doing and more direct conversation. I need to have language about risk-taking that I can use for the vast proportion of the day that he’s pushing his limits.

I’ve said before that our big hopes for SBJ are that he grow to be kind and wise. I want him to take risks and push at his limits, but I want him to have his brain engaged, too. So now when he’s trying something new or tricky and I’m commentating, I’m replacing ‘careful’ with ‘thoughtful’ and ‘sensible’:

‘Be a bit thoughtful about how you’ll get down, ok?’

‘I want you to be sensible about that ledge and have a look first (!)’

I think a lot about language. I often thought of my role as a pastor as one of giving people language for new ways of living, thinking, relating. If you can say things out loud, articulate emotions, expose unconscious attitudes and give them names, you can enable real change.

Words matter, and are formative, so I think hard about the ones I use with children. Most parents do.

So this series is a chance to share some ideas about how to speak with our kids for maximum impact. I wrote a quick list this afternoon of a dozen words or phrases that I have consciously adopted with our toddler and other kids I spend time with. Some of them are from my parents, some from observing other parents I admire, some from books, and the odd one I get sole credit for.

They’re the product of my our values, the kind of child SBJ seems to be, and a million other factors, so I’m definitely not presenting them as perfect language for all children or parents. I’m just getting the ball rolling. ‘Be careful!’ might be a perfectly appropriate and important phrase in your house!

Over the next while, pay attention to what you say to kids, and note down your gems, the things you are proud of saying regularly and intentionally. Think about why they work for you. We’ll go one situation or interaction at a time (eg, toilet-training, internet usage, praise, apologising), and share ideas.

So today it’s about the tensions between being careful and taking (appropriate) risks.

What language do you use to help shape your kids’ experience of hurting themselves or doing things that stretch them?

0 comments on “Magic Words #1: Be Thoughtful about that Sheer Drop”