Toy Guns (and Pieces of Toast that go Pew Pew) 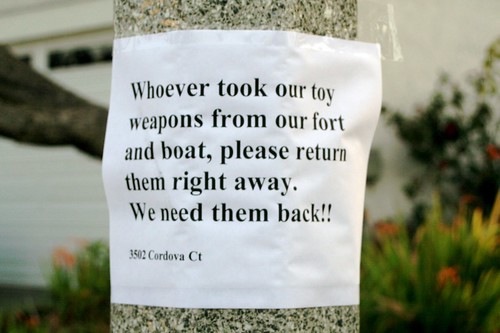 My own theories on the place of toy guns haven’t been put to the test yet, but the ever wise and thoughtful blue milk‘s have:

Since that night I have been either giving up or making well-considered peace with him; I never can tell with my parenting. In my head I played with some of the moratoriums I saw other parents use: no assault rifle toys, but ninja swords and pirate muskets could be historically charming enough to be okay. I also considered the rule some parents have made about not allowing toy guns, but turning a blind eye to sticks and pieces of toast that make pew pew noises.

In the end, I’ve decided I am reluctant to make any kind of ‘play’ – particularly one that is active, imaginative and self-driven – entirely taboo. These are my new rules. I am allowing some weapon play but won’t particularly set out to buy toy guns and swords. I will accept the idea of killing as a game but I will also use this opportunity to talk about problems with and alternatives to violence. I will not stop him and his friends from playing gun games, but I will not let adult versions of the game extinguish his own imagination either. (That means limits around films, TV and computer games until he is older.)

A few years ago I would have been disappointed in these compromises. Now I am fine with thoughtful failure. I like the way parenthood turns you in on yourself and you never quite know how it will turn out; although you can feel lost and stupid, I even quite enjoy the work of figuring it out.

Read the rest of the post here, and add your own stories below, please!