Advent in Art #2: The Visitation 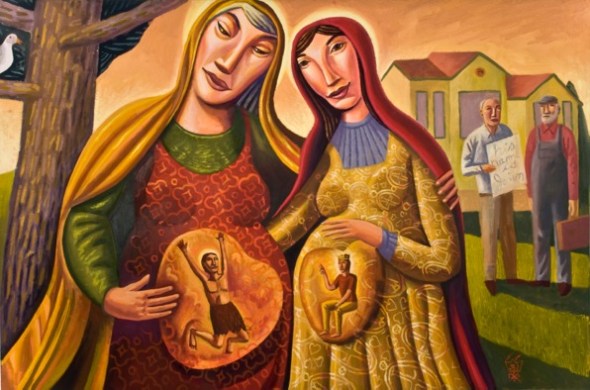 The Visitation, James B Janknegt, 2007, oil on canvas

Nine months is a long time to wait, but thousands of years is longer. Week two of this year’s Advent in Art cycle places the Christmas story in context of a much larger narrative of hope and a longing for justice.

As we meet them in today’s painting, Mary and Elizabeth, like all mothers around the world before and since, are living in the half-known world of pregnancy.

Their moods, ankles and bellies tell them they are pregnant, that something marvellous and terrifying is on the way. Their place in society, as women in a web of family and neighbours, gives them a certain amount of insight and knowledge about what is to come. There will be blood and pain. There will hopefully be a well and happy baby and a well and happy mama by the end.

But there’s no ultrasound in Palestine (then or, indeed, probably now). As we saw last week, an angel stood in for a sonographer in revealing to Mary that she would have a baby boy. Her cousin Zachariah got a similar message, also via angel rather than medical technology. Unfortunately his (reasonable?) scepticism meant he couldn’t let his wife in on all the secrets.

You can read the whole crazy backstory in Luke 1, some of which is excerpted on the Advent in Art card (which you can also see here).

This painting picks up after the angels have headed home. We’re reminded of them, though, by being able to see the futures these two babies have ahead of them. What strikes you about how James B Janknegt has portrayed the two foetuses?

If connecting with God (or with Advent) through art is new to you, you might like to start with the first card, and some starter questions, here. Caroline’s comment on the first Advent in Art blog post might be helpful for those of you who want to look at the art with the small people in your life.

As you look at this week’s painting, the biblical text is helpful to have alongside. Biblegateway lets you read it in a bunch of different translations (and languages!), so you may like to have a look there as well. If you’d like to contrast other depictions of this scene, check out the list of links at TextWeek.

But back to Janknegt’s painting.

How do you feel about it? What do you imagine the two women are thinking and feeling at the moment the painter has captured? Who else is in the painting, and why are they there?

And what about this hope business? What can Mary’s and Elizabeth’s experiences of pregnancy show us about the wider picture of God’s work in the world through them?

The idea of this series is that we get to chat together about these paintings, the texts they are meditating on, and our responses to them. So please add your thoughts to the comments thread below. And if you know a kid to chat with about the paintings and the stories, so much the better!

Every year I was struck by different things, but every year, the climax of this week’s story was the same for me. Mary’s song.

It’s a song of occupation and liberation. A piece of poetry so passionate, so unexpected in a young woman, so broad in its view of the world, that it has become a cornerstone of daily and weekly worship in many traditions. It has been set to music thousands of times. It even has its own name, taken from the Latin translation: the Magnificat.

I’m bursting with God-news;
I’m dancing the song of my Saviour God.
God took one good look at me, and look what happened—
I’m the most fortunate woman on earth!
What God has done for me will never be forgotten,
the God whose very name is holy, set apart from all others.
His mercy flows in wave after wave
on those who are in awe before him.
He bared his arm and showed his strength,
scattered the bluffing braggarts.
He knocked tyrants off their high horses,
pulled victims out of the mud.
The starving poor sat down to a banquet;
the callous rich were left out in the cold.
He embraced his chosen child, Israel;
he remembered and piled on the mercies, piled them high.
It’s exactly what he promised,
beginning with Abraham and right up to now.

Or in a more traditional translation (the TNIV):

My soul glorifies the Lord
and my spirit rejoices in God my Saviour,
for he has been mindful
of the humble state of his servant.
From now on all generations will call me blessed,
for the Mighty One has done great things for me—
holy is his name.
His mercy extends to those who fear him,
from generation to generation.
He has performed mighty deeds with his arm;
he has scattered those who are proud in their inmost thoughts.
He has brought down rulers from their thrones
but has lifted up the humble.
He has filled the hungry with good things
but has sent the rich away empty.
He has helped his servant Israel,
remembering to be merciful
to Abraham and his descendants forever,
just as he promised our ancestors.

It’s been a long time coming, but a change is gonna come.

This is the second in a series of Advent paintings by James B Janknegt, curated by Alison Squires, from a concept by Mark Pierson, as a project of World Vision New Zealand for the spiritual nurture of their staff.

You can visit the Advent in Art site directly and have Mark’s reflection questions and ritual ideas emailed to you each week, and see our discussions here beginning in the first week with Advent in Art #1: Announcement. Further artworks by James B Janknegt can be seen at BC Art Farm.

0 comments on “Advent in Art #2: The Visitation”