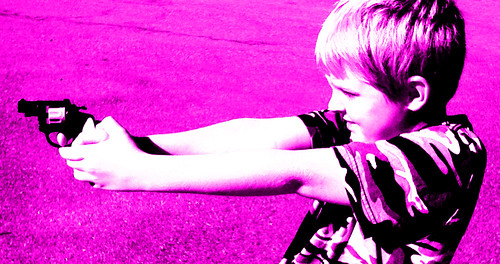 Like many of you, I feel almost unresolvably torn when it comes to little kids and games of murder.

Raising SBJ to be a kind, non-violent man is a high priority for us, so what do we do about games of cops and robbers or pirates?

My besties Nicholas, Richard and I played ‘Luke and Leia‘ every lunchtime for a year when I was six, but I have developed neither Jedi levitation nor light sabre violence as adult pursuits. I do realise that my distaste for seeing kids play violent games is not really about my boy turning into a little monster if he brandishes a weapon in play.

Still, fundamentally, viscerally, I don’t want SBJ to play with toy guns. Firearms are just too misused among humans in the 21st century, from domestic violence to school shootings to the couple of dozen wars going on right now. I’m not coming out against hunters or target shooters, but I am hugely relieved that I live in New Zealand, where I don’t know a single person who has a gun in the house ‘for protection.’

I am anti-gun at heart and I can’t imagine having one – real or pretend – in the house. For the sake of consistency, it’s hard to approve then of water pistols, swords or even light sabres.

But I also don’t want to be in the business of banning things. Certainly not such a long list of things (including pieces of toast that go pew pew!), and certainly not when it is likely to be such a losing battle. Every mother has a story of being shot with a teaspoon or teddy bear or whatever was to hand when her kid – or even teenager – was in the mood for making shooting noises.

I’m torn. The only good solution seems to be SBJ spontaneously deciding never to go near a weapon in play, which I won’t be counting on. Is the only other answer to sigh and turn a blind eye?

This recent article makes for interesting reading, and might just get me off the idealogical hook. Rachel Marie Stone writes in her.meneutics about child psychology research on kids, violence and play:

Early this month, a six-year-old in Silver Spring, Maryland, was suspended from school after he pointed his finger like a gun and said, “pow.” In a letter to his parents, school officials described the incident as one in which their son “threatened to shoot a student.”

In one way, this reaction is understandable. After the horrific events at Sandy Hook Elementary School, seeing any sort of gunplay at school would be, on a gut level, distressing. This sort of reaction certainly has historical precedent: in 1968, following the assassinations of Martin Luther King Jr. and Robert F. Kennedy, the Sears Roebuck Christmas catalog pulled all toy guns from its pages.

But, beyond visceral reactions—exclamations of distaste at child behavior that uncomfortably resonates with tragedy—does pretend violence perpetuate real violence?

Not necessarily. According to Stuart Brown, psychiatrist and the founder and director of the National Institutes of Play, “Play can act as a powerful deterrent, even an antidote to prevent violence. Play is a powerful catalyst for positive socialization.”

But parents and teachers—like the teachers in Silver Spring, Maryland—are often not inclined to see it that way.”Teachers…often see normal rough and tumble play behavior such as hitting, diving, wrestling, (all done with a smile, between friends who stay friends), not as a state of play, but one of anarchy that must be controlled.”

In a study of adults who had committed violent crimes, including the Virginia Tech killer Seung-Hui Cho, Brown discovered that their childhoods had been marked not by violent play but, more strangely, by a lack of play: the very thing that helps people, especially little people, work through conflict and aggression safely and productively.

[Read on for more of the research findings and for the seaweed reference.]

I think this is the first time I’ve read a rationale of letting kids play with guns that has some moral and psychological consistency and matches up with my parenting values.

There will still be the need for conversations about play violence and real violence, and I won’t be wrapping any guns in birthday paper anytime soon, but these ideas have helped me to relax a bit internally.

0 comments on “Toy Guns and Carefully Shaped Pieces of Seaweed”