How to Throw a Pancake Party 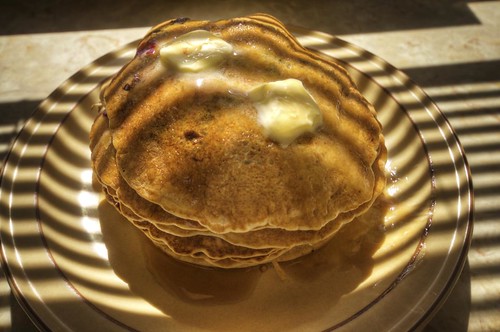 I could probably tell a history of my life through pancakes.

They were one of the first things I learned to cook by myself, as evidenced by the bespattered pancake page of the Edmonds Cookery Book. You too, huh?

My Mum got heaps of kudos by pouring pancakes in the shape of our initials. Nothing like a T on your plate to make you feel special!

The first time I ever encountered the now ubiquitious New Zealand specialty of pancakes with bacon, banana and maple syrup was at the old Globe cafe with Steve, before visiting our church’s early service on a Sunday morning. That’s the same block of Cuba St we now live on. 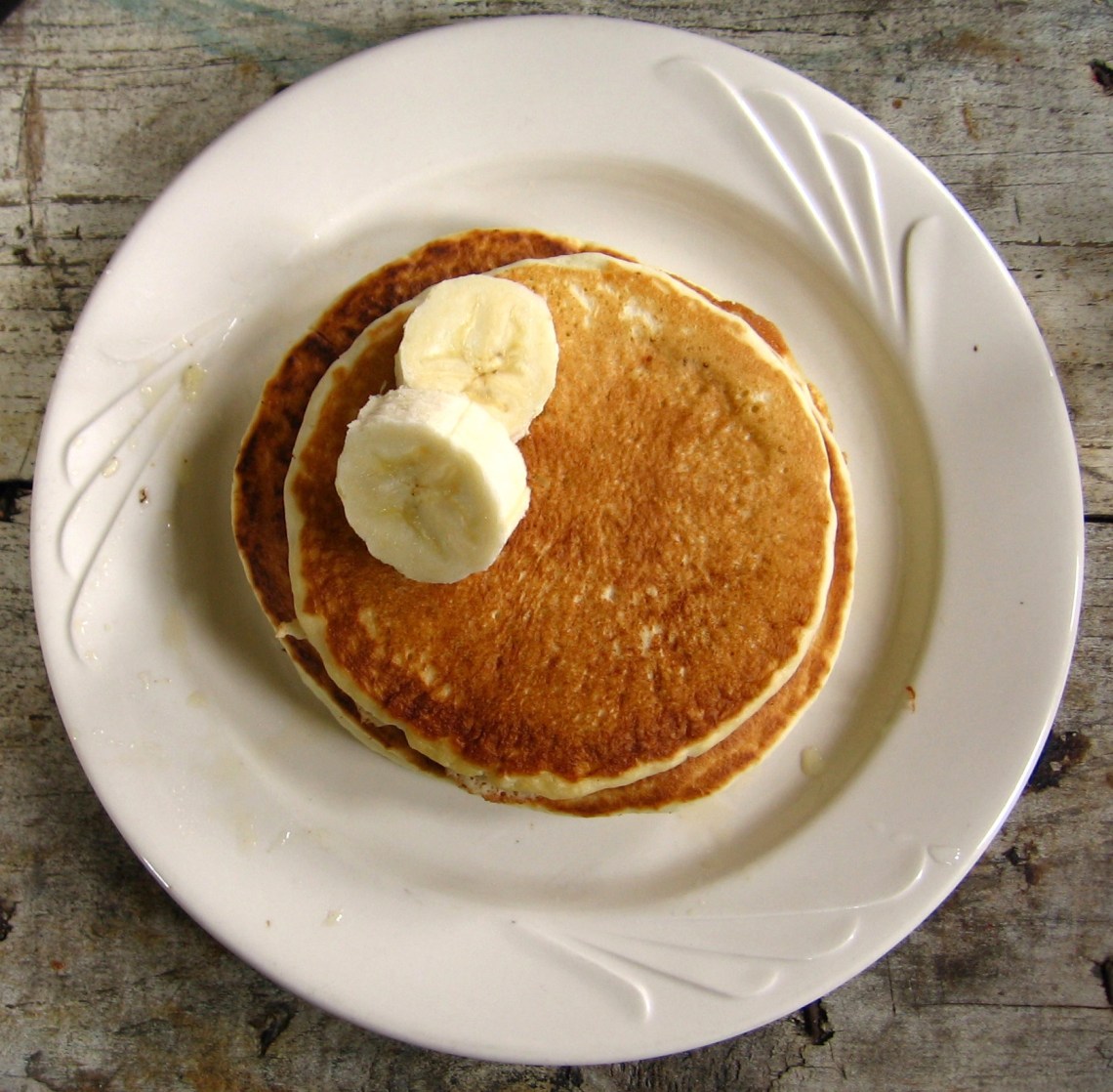 When Kent, Craig, Adriena and I lived in our awesome Hanson St flat, close to several of the high schools our youth group kids went to, Kent and I got up at 6am once a term to make dozens of pancakes for our youth groupies, who arrived in a steady train from 7ish for before-school feasting. It was one of the best things we did.

Then Mum discovered Ruth Pretty‘s lemon ricotta pancakes and a new Christmas morning tradition was born! For the years I was on duty on Christmas Day, it shifted or replayed on Boxing Day, and is now supplemented with dairy-free options, but, oh my, those fluffy puppies are amazing.

Vegan pancakes were perfected for the monthly Pancake Posse gatherings in Auckland, thanks to Gareth’s careful recipe refinement and Jody and Julian’s anything-can-be-vegan-even-an-egg-and-milk-based-food creativity. Actually, the maple walnut vegan ones are superawesome.

When I was a pastor, the church AGM was held in February, so we combined it with Shrove Tuesday to make a Pancake Party AGM. Delicious chaos!

This year I’m feeling inspired to throw a meet-the-neighbours Pancake Party for Shrove Tuesday, next week. I haven’t told my husband about this plan yet (let’s see how up-to-date with the blog he is, shall we?), and I reserve the right to decide it’s insane, but here’s my plan so far. Pancakes take a loooooong time to make for a crowd of more than four people. Much longer than you think. To cook for the youth group extravaganzas, each term Kent and I would get up earlier than the last time, even though we’d made a few litres of batter the night before.

Clever Lyn had the inspired idea of ready-made pancakes for the AGMs, particularly as gourmet crepe and pancake makers Marcel’s are based in New Plymouth. But they sell through supermarkets nationwide, so I’m thinking of cheating – or rather, making a sensible decision about my capacities – and buying a bunch of them to heat rather than cook to save time and stress.

If you think this could be a good plan for you but it would be a financial stretch (either ready-made or from scratch pancakes), I reckon a gold-coin donation bowl on the dining table would be perfectly appropriate and well-received, given that most of your guests wouldn’t have dreamed of inviting the neighbourhood for tea.

Speaking of invitees, we’ve hardly met any of our neighbours since we moved into our apartment in downtown Wellington two months ago. Several of the apartments on our floor are let out by the attached hotel, so don’t have permanent residents, and the others seem to be inhabited by very quiet people! The only opportunity to bump into anyone is in the lift, as there are no front gardens or even windows to wave through as we pass other flats. 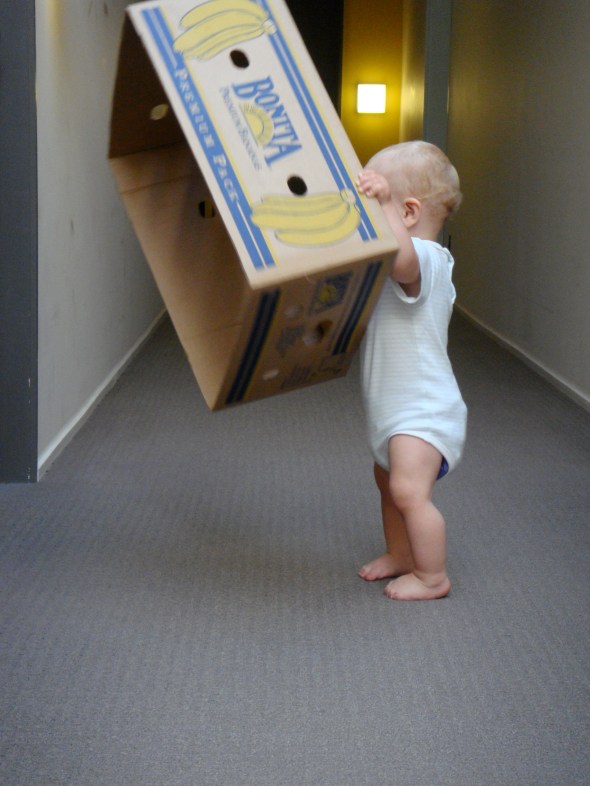 SBJ doing his best to meet our neighbours by playing in the corridor.

The people we do see all the time are the hotel staff, who all know SBJ well. Several times a day he will make his fish noise (a cross between S and SH, accompanied by enthusiastic pointing) and demand to go and see the fish in the hotel’s fishtank. Yesterday he did that when we were coming home down the street and got near the hotel entrance. Slightly obsessed.

Anyway, between the concierge and restaurant staff near the fishtank, and the cleaners who we often bump into (and learn Portuguese from – hoping Nepali will be next), these folks are really our day-to-day neighbours.

So I think I’ll make some (very un-elaborate) invitations and put them in the letterboxes for our floor, and also hand them to the staff. I need to check when the shifts change in case that helps with timing. I won’t assume we’ll get a huge turnout, but it’ll be nice to invite people and a way of breaking the ice.

I’m figuring a sort of dinner slot will be best, but we’ll just do plain pancakes with lemon, sugar and maple syrup options, unless I get super inspired. Tea, coffee, water, pancakes: I could do something much more elaborate if I had the inclination, but I think that will be plenty, as a way of offering some hospitality and meeting our neighbours.

We’ll make it a drop-in-when-it-suits over a couple of hours (5-7pm, maybe?) to catch people with different schedules (and so we’ll fit in our rather compact apartment), and I’ll enlist some help with cleaning, catering and dishes. It sounds do-able, right?

What do you think? Advice welcome, and I’d love to hear if you’ve got plans for Pancake Day celebrations. Might you even throw your own Pancake Party for the neighbours?

0 comments on “How to Throw a Pancake Party”