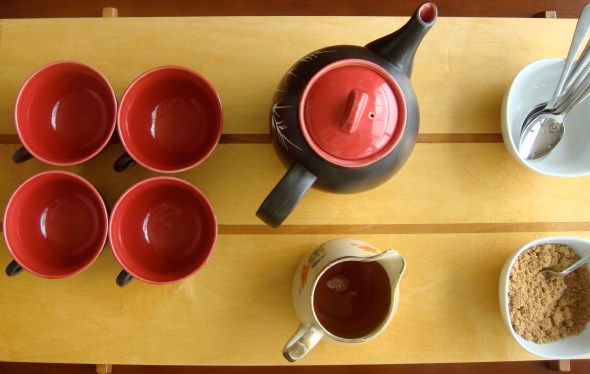 We did it! Shrove Tuesday has been well and truly celebrated in our apartment building.

It was a bit of a stretch, right to the edge of my current capabilities, but it was also enjoyable, satisfying and a grand success. Get to know our neighbours better: tick!

To recap, we decided to invite people for pancakes at a time that would suit the hotel staff best, because they’re the people we see most of in our building (our apartment building is attached to a hotel).

We invited everyone on our floor as well, and put an invitation in the lift on the off-chance, but we knew that most residents wouldn’t be free at 2pm-4pm. That’s ok. Hopefully just getting an invitation (with our cutie-pie on it) will be received as a goodwill gesture, and be a starting point for chats in the lift.

With help from Auntie Lou and Auntie Laura (tip #1: call in the cavalry), we cleaned and tidied and set up, and then cooked dairy-free pancakes and, ahem, heated the bought ones (tip #2: make it as manageable and easy as possible). And then ate them (tip #3: maple syrup is delicious). 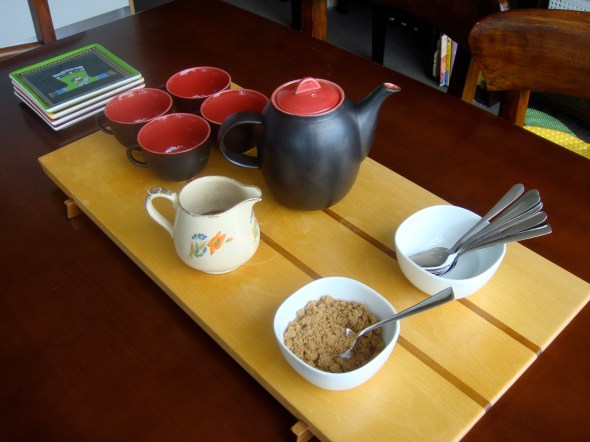 We set up for guests, but expected that most of the pancaking would happen downstairs by tray, and so it came to pass.

Our first visitor was a French hotel guest who was looking a little lost in the corridor, so we fed her pancakes and invited her in so my husband could help with her computer.

There were no more visitors for a while after that, so we loaded a tray with a plate of mini-pancakes, a jug of maple syrup and a stack of napkins and headed out. We met a resident in the lift, who seemed chuffed to be offered pancakes while descending!

After a couple of slightly underwhelmed responses in the corridor, we hit our stride in the hotel lobby, visiting our friends in the café and at the front desk. The staff are all so kind to SBJ, who visits everyday, sometimes several times. He makes his hissing fish noise a few dozen times a day to indicate that he wants to go to the ground floor where the fish-tank is.

He visits the fish briefly (spot the scaredy blue one dart behind the coral, see if the bottom feeder is sucking on a rock) and then toddles around on a royal walkabout, greeting his fans. The staff all wave and say hi, give him high fives, and generally fuss and coo, even when he ‘visits the fish’ seven times in a day, as he did yesterday. They’re a good bunch, so it was nice to be able to do something for them.

We know a lot of the staff, but we met several more we haven’t spoken to before. Nothing breaks the ice like sugary treats.

A few hotel guests were also in the right place at the right time, and then we popped into a couple of neighbouring shops where SBJ is a regular. We discovered that the owners of one actually live on the floor below us, so that was a good connection to make. 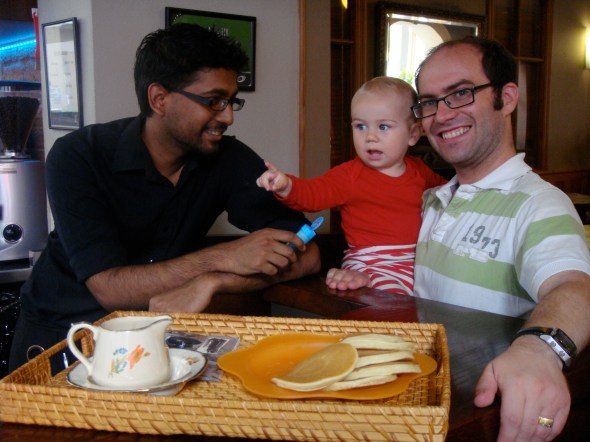 We finished up the day with our lovely friend Birgit, who runs the hotel catering. She came up the apartment after her shift, with her partner, so it was great to be able to spend some time with them. It was after the 2pm-4pm slot, so it felt good to know that no one else would be popping in and I could just concentrate on getting to know them without multitasking. They even brought a present for SBJ: a fish!

All in all, it was tiring but couldn’t have gone better. I found the day quite stressful – just because I’m out of practice with this kind of event, and still not feeling a hundred per cent – so it was good that most of the socialising happened while we were out and about, and then after the ‘open home’ time-slot.

When the United Kingdom wakes up to Ash Wednesday in a day or so, I’ll get my first 40 Acts email to prompt me to ‘Do Lent Generously.’ This year Shrove Tuesday wasn’t about a last day of gluttony before fasting but a kickstart to a new season of generous living and hospitality. It feels good.

Let me commend a Shrove Tuesday neighbourhood pancake party to you for next time. I’m already planning a hot cross bun extravaganza.