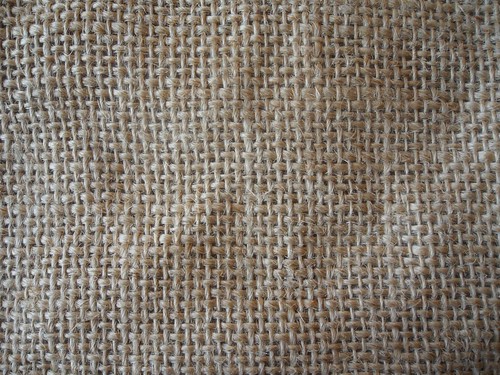 I considered procuring a sackcloth onesie recently. A couple of months ago, SBJ began to add sit-down-in-the-street protests to his repertoire of new behaviours.

If he wanted to run off independently in a carpark but was restrained, or, maddeningly, if we wanted him to walk but he wanted to be carried, then all in an instant, he would go boneless, drop to the ground and wail. With real tears!

I read the Old Testament a lot as a kid (yep, a geek from way back), so this dramatic demonstration of despair forcefully reminds me of the ancient Jewish practice of tearing one’s clothes, putting on sackcloth and sitting in ashes, as when Jacob hears of Joseph’s supposed death in Genesis 37:

28 So when the Midianite merchants came by, his brothers pulled Joseph up out of the cistern and sold him for twenty shekels of silver to the Ishmaelites, who took him to Egypt.

29 When Reuben returned to the cistern and saw that Joseph was not there, he tore his clothes. 30 He went back to his brothers and said, “The boy isn’t there! Where can I turn now?”

31 Then they got Joseph’s robe, slaughtered a goat and dipped the robe in the blood. 32 They took the ornamented robe back to their father and said, “We found this. Examine it to see whether it is your son’s robe.”

33 He recognized it and said, “It is my son’s robe! Some ferocious animal has devoured him. Joseph has surely been torn to pieces.”

34 Then Jacob tore his clothes, put on sackcloth and mourned for his son many days. 35 All his sons and daughters came to comfort him, but he refused to be comforted. “No,” he said, “in mourning will I go down to the grave to my son.” So his father wept for him.

The ancient Jews were expert at embodying their spirituality, making it physical and overt. Orthodox Jews today still tie the Scriptures to their hands and foreheads, and put them on the doorposts, as ways to keep the holy words present and tangible. 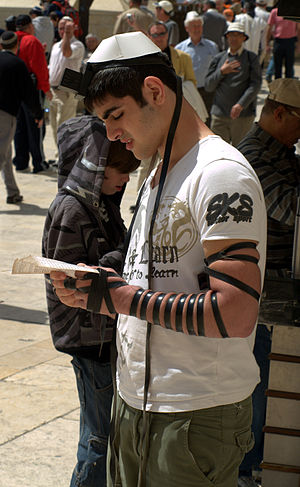 A man at the Western Wall wearing both hand and head Tefillin. (Photo credit: Wikipedia)

We’re in the first week of Lent, a time when Christians traditionally try to identify bodily with the suffering Jesus went through. Some of us here are doing Lent a bit differently this year, following the 40 Acts of Generosity challenge, rather than fasting.

Given that choice, I have been thinking about the point of fasting at Lent, and wanted to share the thoughts of biblical scholar and überblogger Scot McKnight, who has written on the topic.

Try defining it, and I’ll make a suggestion. Go ahead — in your mind define it.

Here’s my suggestion: If, in defining fasting, we are tempted to define fasting as something we do “in order to” get something, I suggest we need to look again at the deepest wells of the Christian fasting tradition: the Bible. In Fasting: The Ancient Practices  I suggest that in the Christian tradition we somehow got sidetracked.

We turned fasting into an instrument for personal spiritual formation, and in doing so lost one of its — if not the — key element. Fasting is not so instrumental in the Bible as it is responsive. So…

As always, I’m interested in your thoughts about this. Do you have any experience of fasting, either in this ancient way, as a response to something, or in the modern development as a spiritual discipline?