This is the first in an occasional series on our experience of co-sleeping with our baby (and toddler, as he becomes later on!). You can see the series list here.

We didn’t intend to become ‘attachment parents.’ We don’t tick all the boxes, but we could certainly sneak into an AP Christmas party and fit right in, particularly since we co-sleep with our toddler, SBJ.

I read somewhere that something like 40 per cent of parents have their kids in bed with them overnight at least some of the time, so lots of people will have experienced that. But I realise it’s more unusual to share the same bed full-time, so I thought it might be useful to outline what we do and why. Of course, this is very much in the spirit of It Works For Us, rather than saying or even passive-aggressively hinting that everyone must do it.

When SBJ was a little baby he had a borrowed bassinet (a small baby bed on a stand, specifically for young babies who can’t crawl or stand). It was great, and had wheels so we could bring it into the living area during the day and put it back in our bedroom at night.

Sudden Unexplained Death of Infants (SUDI, previously knows as cot death, crib death or SIDS) has been of great concern in recent decades, especially in New Zealand. We were careful to listen to Ministry of Health evidence-based guidelines that babies are safest if they sleep in the same room as an adult for the first six months of their lives (as well as sleeping on their back, with their faces clear, and living in a smoke-free environment).

I had also read that co-sleeping (having the child and adult sleeping in the same bed) had been associated with deaths in the United States and was being discouraged there, so it wasn’t on my radar as a practice for our family.

SBJ asleep on his Daddy’s chest, at about one week old.

In his first months, therefore, SBJ slept in whatever room we were in, either in his bassinet, the arms of an awake adult (his preferred option by a long way), in a car-seat or push-chair if we were out and about or strapped to his Daddy’s chest in a front-pack (also very popular with the under-one crowd in our house). I aimed to have him fall asleep in his bassinet at least once a day, but he much preferred to be held, fed or carried to sleep.

In the night, he would wake once or more for feeding, and all three of us would be awake for a bit. I have trouble with my arms and back, so my husband would get SBJ out of his bassinet, give him to me to feed, go back to sleep, then wake and return him to his bassinet when we were finished.

Except this last step usually involved an extra 5-20 minutes of settling him in his bassinet, because ‘the transfer’ as we called it, in hushed tones, was a difficult business. Having fallen asleep feeding, why would my baby want to go anywhere else? We developed a repertoire of balletic movements designed to manage the transfer without waking him, but nothing worked infallibly.

Every so often, we would give up. The only thing that was sure to calm SBJ at this point was to fall asleep on Daddy’s chest, the way he had spent his first night in the outside world.

When he was five months old we travelled around New Zealand and to the United Kingdom for five months, which is where we really gave up on conventional sleeping.

Half Houdinied out of his sleep-sack as usual, asleep in our bed next to his Dad for an afternoon nap (x2)

Transferring SBJ into our otherwise excellent travel-cot was a whole new level of insurmountable. In the intervening months, we had also read more widely on the subject of co-sleeping, and learnt more about safety research.

This article, for instance, gathers references on the safety of co-sleeping, including findings that it’s safe unless the adult is a smoker, obese, or is drunk or stoned. It’s these factors that have been significant in the deaths that have been associated with co-sleeping. It’s also best for premature babies to be in their own cots.

There are a bunch of benefits that researchers have observed when families co-sleep, which you can read about here. But take care: I reckon it’s best to read this if you’re considering or already co-sleeping, as a useful reassurance and validation. It’s the kind of list that could easily make non-co-sleeping parents feel like they’re doing the wrong thing, and neither the author of the article nor I am intending that. Do what works for your family, definitely. Whatever helps everyone sleep best is great!

More interesting for some will be the co-sleeping pros and cons from the wonderful Lucy at Lulastic:

In the middle of the night a few days ago Ramona shuffled over to Tim, climbed up so her bum was right in his face and did a whopping toot. Then she clambered back down to her spot and returned to sleep. Oh, how Tim and I didst laugh- the timing was impeccable. Farts- when it comes to making a list of pros and cons of cosleeping- where do they come? No one likes little clouds of excrement in their nostrils but the comical effect of childly bottom coughs are right up there. It is a dilemma, for sure. I’ll have to leave it hanging in the midst there. But here is the rest of my list.

Her morning kisses are definitely number one. Ramona wakes up, stretches and immediately finds my face for a kiss, as if she is so stoked to begin a new day with me as her mummy.

And speaking of dads, she also links to this beautiful essay from a co-sleeping father:

If you’re a man with a new baby who’s always telling people you’re jealous of the bond between mother and child, and if your child isn’t yet sleeping in your bed, I say to you: Bring your baby in, get to know him, sleep with him. If someday you want to share your child’s daydreams, take a step in the right direction by first sharing his night dreams.

After many months of my son sleeping with us, I am intimately familiar with his needs, both at night and during the day—even if I’m not always the one who can fulfill them. (I can’t, after all, nurse him or be his mother.) I feel as if I am in sync with him as I have been with no other human. I don’t think I even knew what it meant to be so familiar with another human. And I cannot explain to you how exhilarating that is. You have to experience it for yourself.

We didn’t co-sleep with any regularity until SBJ was five months old, and if we have another child I would probably look into this kind of ‘side-car’ arrangement, rather than have a newborn in bed with us. I’ve never found them on sale in New Zealand, but I’ll look harder if necessary later on.

We started bed-sharing because it was convenient, and we carried on because it was waaaaaay better for our collective sanity than the previous arrangement. Before, to feed in the middle of the night, SBJ had to wake enough to wake us up, and then be woken again to be put back into his own bed. My husband had to wake to do at least one of the pick-up/put-downs, and I was awake for the whole deal. Now, SBJ needs only to wriggle without waking to have a feed. My husband doesn’t wake at all, and I wouldn’t call what I do waking exactly. I wake enough to get us both into position, and that’s about as strenuous as it gets. So we’re all able to sleep much better. 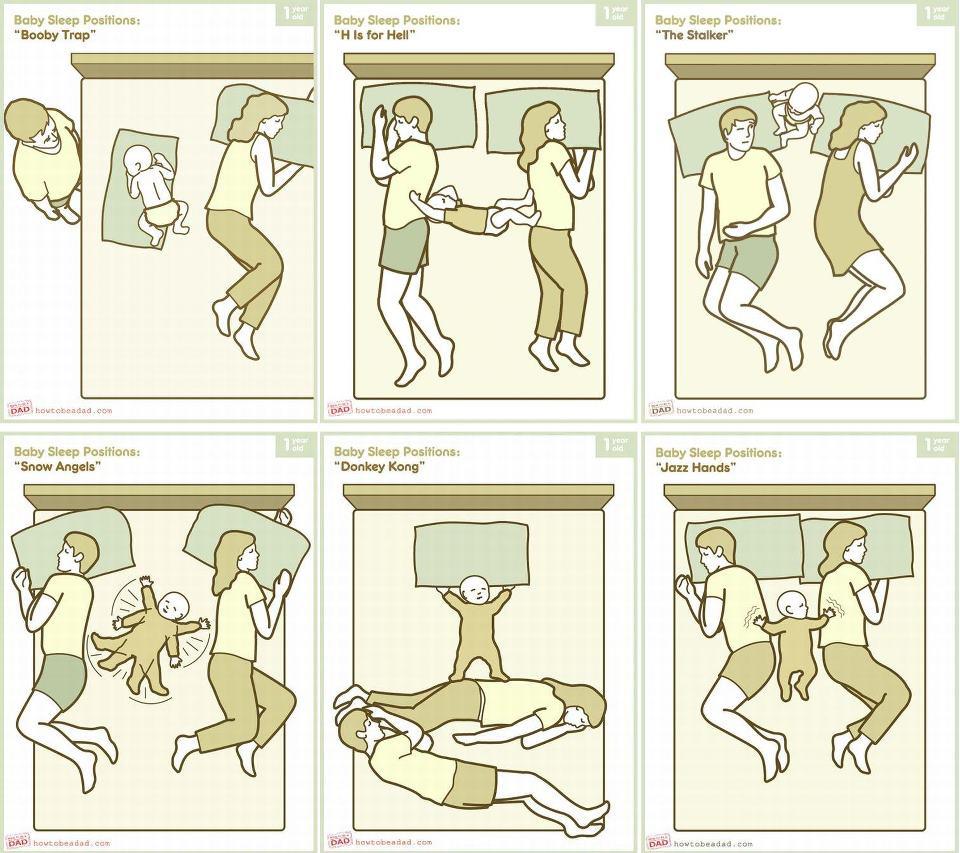 We also really enjoy it. If we didn’t, I’m sure wouldn’t do it. We’re not that idealogically committed!

Now that SBJ bigger and more robust than a newborn, there’s nothing like sleeping snuggled up with him. We get to hear him sleeptalk (crackers, dogs and Daddy are most on his dreaming mind, apparently), and see his first grin of the day as soon as he wakes up.

We haven’t used a bassinet or cot since he was five months old, and It Works For Us. I’d be interested to hear if any of you have found co-sleeping helpful and how you got into it. Feel free to share any practicalities or tips or other reflections in the comments below.

Things got more complicated as he started to crawl and walk, so in the next post I’ll talk about how we handle co-sleeping with a toddler, and the ginormous bed we purchased on return to New Zealand. Ahhh, our bed is awesome!