Co-sleeping Converts #3: Sleep-crawling and Other Challenges

This is the third an occasional series on our experience of co-sleeping with our baby (and toddler, as he becomes later on!). You can see the series list here.

Co-sleeping becomes a whole new thing when your baby gets mobile.

I was so astounded by observing the phenomenon of sleep-crawling (SBJ also sleep-talks and sleep-dances. It’s a busy dreaming life!) that I exclaimed about it on Facebook when we were living with my parents-in-law in the United Kingdom.

I wasn’t asking for advice, but plenty of parents identified with this phase and recommended the Safe T Sleep device that keeps babies lying down. It’s sort of a sheet with a bit that winds around the baby’s middle. It doesn’t work in a double bed.

So what do you do when it’s time for your baby to be asleep in (your shared) bed but you don’t want to be there yourself? Maybe the 2pm nap is a great slot for vacuuming, blogging or partying on down, sans baby. Maybe you don’t want to go to bed at 7.30pm when your toddler does. 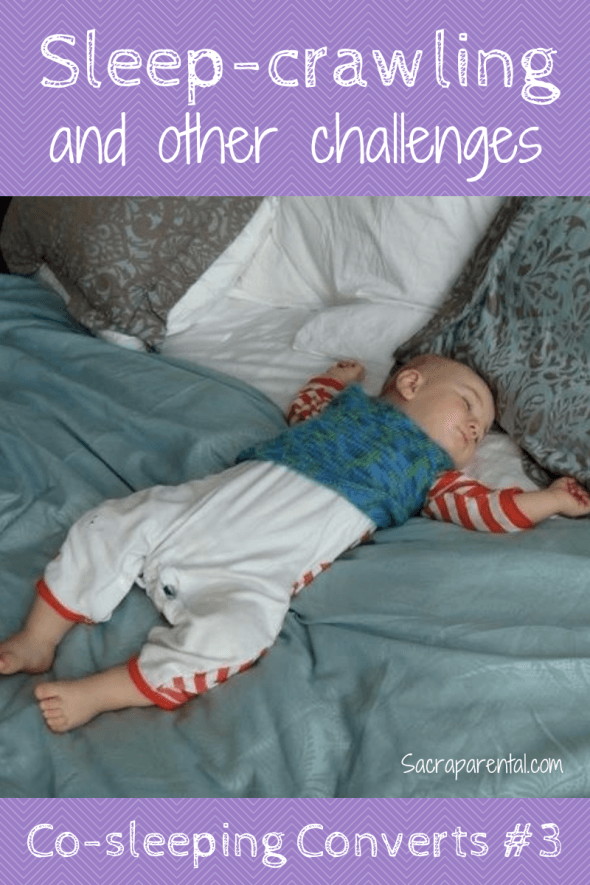 For quite a while I didn’t mind just being in bed with SBJ when he was. I was in the middle of postnatal depression, so it was a great opportunity to have some extra rest and quiet. Sometimes my husband would be keen for an afternoon nap himself and take SBJ with him.

But when we had a month in our own place in the UK, we had the chance to try the Montessori floor bed approach, and it was a winner. SBJ was 7-8 months old.

The idea is that instead of a cot, your baby or toddler has a mattress on the floor, so a) there’s no risk of injury from falling or crawling out of bed and b) the child can decide when to be in bed and when to be out. This is supposed to help the little one learn to listen to their own sleep and wake rhythms, among other benefits.

We put a mattress beside our bed in our little house in Stratton-on-the-Fosse (oh, how I adore English village names) for SBJ. He was just getting the hang of crawling up and down steps, and was able to crawl on and off his mattress and also up to our bed from it. At night we read stories down on his bed, prayed with him and then I fed him to sleep, lying down comfortably. When he woke for a feed in the night I could choose to join him in his bed or hiff him up to mine, depending on how I was feeling. Our bed was also king-sized, so we just had so much room! It was a brilliant set-up.

For daytime naps, the big bed was low enough to the ground that we happily put him to bed in it, knowing he couldn’t hurt himself if he wanted to come and see us or fell off accidentally – not that either one ever happened. When he woke in the big bed, he just sat up in it and called/cried for us, so it was very straightforward.

Learning from all of those experiments, we decided when we got back to New Zealand and moved into our own place to buy a new, enormous bed that we could all fit in comfortably. A huge bed has always seemed like an unjustifiable luxury to me, but I felt liberated when I learned that the famously thrifty Lucy from Lulastic and the Hippy Shake, one of my co-sleeping gurus, has ‘a maHUsive bed, like a triple x, super who-ate-all-the pies-king, which we rescued one time. It has saved the night.’ That helped me see that having enough room for us all to sleep comfortably was simply sensible – and after all, we weren’t spending any money on a cot and accessories!

So now we are the grateful possessors of a who-ate-all-the-pies super-king bed and it is awesome. It’s the only way to go for co-sleeping, I reckon. And you can keep half your wardrobe on it too and not notice

Or maybe that’s only if you’re as short as us.

For other practical bits and pieces, do check these out:

The Dr Sears site has a page on co-sleeping and safety, based on medical research.

It also has a page on the benefits, addressing people’s concerns.

Lulastic on the practicalities, including the perennial question of ‘business socks.’

Co-sleeping has been great for travelling. We’ve stayed in dozens of different bedrooms in SBJ’s short life, and it seems likely that co-sleeping helps him not to be at all phased by all the variation. The bedroom may be different, but the companions are always the same. We also don’t have to take or arrange a travel-cot.

On the downside, most of our friends don’t have spare super-king beds. But, as I just realised in an epiphany the other day, we can do the toddler-bed-on-the-ground plan if someone’s spare bed is particularly small.

Also, it’s counter-intuitive, but smaller beds are more comfortable to bed-share in now than they were when he was littler. As he has got bigger and more robust, he actually takes up less room, as we don’t feel the need to give him so much of his own space in the same way.

One last thing occurred to me tonight as I was getting him to sleep. SBJ is a pretty intense little guy, in terms of energy and focus. He’s always on the go, very sociable and chatty, and full of opinions about what he wants to do and how. He’s not a kid you could call mellow or chilled out, as we were saying at last weekend’s Sacraparental gathering.

Lucy talks about the benefits of co-sleeping to reconnect with her daughter when she’s been at work all day. I realised tonight that co-sleeping gives me the chance to relate to SBJ in a quiet and cuddly way that doesn’t happen when he’s awake. Even when he’s hurt himself and wants to be held, it’s not a cuddly hold that he likes. Co-sleeping helps balance my impression and experience of him. I think if I didn’t spend so much time with him when he’s sleeping, I might think of him as being an exhausting, if charming, little boy. Instead of that, I see him as all-go or all-stop, twelve hours a day each, which is much more pleasant to contemplate!

3 comments on “Co-sleeping Converts #3: Sleep-crawling and Other Challenges”