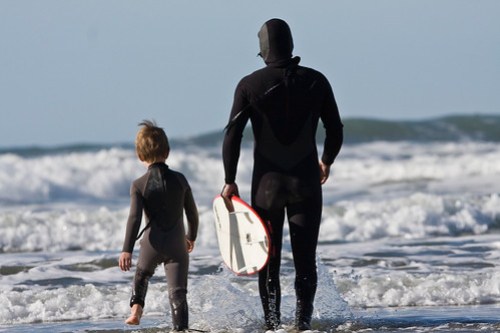 ‘The short answer to how to raise a child in the faith is to live it out openly in front of them.’

By popular demand, today Rod Robson opens a new series of insights from parents on how to present God to our kids. Rod is a Baptist minister (and was my youth pastor!) in Christchurch, New Zealand. This is the manuscript of a talk he gave a few years ago on discipling kids.

When I was about six my mother had the idea that she would send me to a church school: good education, quite respectable, the landed gentry sent their boys to this private school and that was what my mum wanted for me. Problem was back then you needed a minister’s signature when you enrolled, so I was taken to the local church a few times.

I remember very little of this experience except the day that the Sunday school teacher, a nervous young woman, lost her rag with me, and I was marched out of the room to stand in the corridor. I am sure that I deserved it but I can’t remember what I did. So what’s a guy to do, I wandered back to the service. Sometime later the church was rocked by the scandalous affair between a woman in the congregation and the minister. He left his wife and the church for his new love. The town was agog.

A few years later I heard this story and worked out that my teacher was the minister’s lover. I was unimpressed, because what she was telling us did not square with what she did.

Some years later I was at boarding school, still a church school, suffering like I have never suffered before or since. Victimized and living a very stressful existence wondering when the next humiliation or violence would be visited on me. But to my thirteen-year-old self the Chaplain seemed indifferent, indeed he seemed to be a part of the system that allowed my plight to continue, even supported it. And he drove a Fiat X19, quite a fancy sports car – so what was his faith about? Apparently not the poor or the suffering, thought I.

Early memories stick for a reason; they tell us something about what was going on for us. My memory of being booted from Sunday school I think tells me that I thought church was hypocritical. What do your memories tell you about where you were at? Does your memory reflect well on the church and your place in it or not?

The question that I want you to tease out is what is your spiritual heritage?

Another way of asking this question is what kind of faith was modelled for you?

Let me explain. I grew up in a nominally Christian environment, I remember talking about faith with my mum and she said that everyone she knew was a Christian. Which is not to say that there were not people of deep faith around because there were, but they were by no means the majority.

For me the tone was very strong on right and wrong, and the male authority figures were quite distant, they certainly were not emotionally engaged men. A loving Father God just did not really compute.

So my heritage was quite moralistic. The love of God for me or the grace of God for me were not ideas that I can recall being mentioned at all. But I took it as read that we were all capable of being good, so when I fell short I felt very guilty.

What was the faith that you received? It may not be the faith you have now, in fact chances are that it’s not. Here are some questions for you:

What were the ethics? What were the big no-nos?
What was God like? Which wheel of the Trinity was missing?
How important was church?
Which emotions were acceptable? Which were unacceptable?
How much uncertainty or mystery about faith was there?
Who had status?

The question then for us and more particularly for those of us who are parents is what faith are we passing on to the children of this community? You see, I am sure that my Sunday school teacher probably tried her damnedest to show me what light that she could see. I know that my school chaplain was a man of faith who worked hard producing unappreciated sermons for us, his captive audience. He spent the latter part of his career working very hard as a city missioner. So why were their efforts in vain?

I think that it is because education is only a part of what discipleship is about.

In my experience when the subject of discipling children comes up the most oft quoted text is usually Deuteronomy 6:4-7:

Advocates of Christian homeschooling have pointed out to me that the duty to impress these truths on our kids is put on parents, so homeschooling is what we should be doing. Some say that you cannot delegate your God given responsibility to teach your own children. Train a child up in the way that they should go, and they will return to it, which often is used more like a promise than a proverb.

Likewise, advocates of the Christian school movement have pointed out that Christian truths cannot be reinforced all the time if your children are at a secular state school. Thus, the best option for a professional spiritual education is a Christian school.

The rest of us muddle through with combinations of church Sunday Schools, maybe family devotions, and sporadically reading bible stories. Often we have a lot of guilt about not doing more, thinking that we should somehow be doing much better and then our kids would turn out all right. We hope they do but worry that they won’t. Raising our kids in the faith often hovers perilously close to the too hard basket.

A lot of the focus of the conversation is on education. Our kids should know the bible stories, know right from wrong, know the gospel. The unstated assumption is that if they know these things then they will be all right.

You see it in discussions of adult discipleship also. When a church looks to appoint a new pastor they typically want at the top of their list a good preacher, someone who can teach me stuff, someone who can feed me.

I heard a sermon about discipleship a couple of years ago. The preacher’s application point was that we should find someone in the church who knew more stuff about God than we did, go to them and ask them to tell us what they knew. I was gobsmacked but he articulated what many think. The discipleship conversation tends to focus on the top two inches.

Today instead of taking a small passage and digging out the truth from it, I want us to study a whole book together. The book is Paul’s second letter to Timothy, someone that he had been discipling for some years prior. Now Timothy was not a child, he may have been in his thirties. He was a responsible overseer of a church, no mere pup. So what relevance does this book have to raising children in the faith you may well ask?

Some notes and questions to guide your reading:

Paul’s call to Timothy was the call to imitate, be like me.

What heritage are we creating? What are we calling our kids to? Our kids will be like us, at least that will be the starting point.

Will our kids think that financial giving is important? They will have noticed the empty bowl being passed around. We were at a church a few years ago when someone pointed out that how would our kids know that giving is important? Many of us said that we gave quite a bit a little defensively, but this person asked when do our kids see it. So I asked my kids if they thought that we gave money away and they looked appalled! You mean to the church?! They were quite surprised to learn that we did give to the church.

A family I know has created a fund. They are building a heritage of generosity in their kids because their kids are learning to be generous in the act of giving.

The short answer to how to raise a child in the faith I think is to live it out openly in front of them, so:

If they see us giving, then they will learn generosity and service.
If we never say sorry, then why would they ever repent?
If we regularly attend church, then they will think that Christian community matters.
If we don’t include them, then they won’t think that they are important to us.
You say you love Jesus? Well, show me.

I didn’t see it in my Sunday school teacher or my chaplain. Now you and I are the ones being examined. That is an uncomfortable truth, but I am sure that it is the truth.