In a pleasingly familiar story, Debbie Sterling, a Stanford engineer, wants to introduce girls to the world of engineering.

She’s created GoldieBlox, a set of adventure books, where the reader helps Goldie solve problems using mechanical tools that come with the books.

I’m wary of the gender generalisations in the KickStarter proposal below, but very attracted to the idea of combining verbal and spatial skills:

When I was a little girl, I thought the word, “engineering” was nerdy and intimidating and just for boys. I’ve since learned I was so wrong. Engineers build all the important things we use every day…things that make our lives better. The scary truth is that only 11% of engineers are women and girls start losing interest in science as young as age 8! This is our chance to change that statistic.

I’m creating GoldieBlox to inspire girls the way Legos and Erector sets have inspired boys, for over 100 years, to develop an early interest and skill set in engineering. It’s time to motivate our girls to help build our future.

GoldieBlox goes beyond “making it pink” to appeal to girls. I spent a year doing in-depth research into gender differences and child development to create the concept. My big “aha”? Boys have strong spatial skills, which is why they love construction toys so much. Girls, on the other hand, have superior verbal skills. They love reading, stories, and characters.

GoldieBlox is the best of both worlds: reading + building. It appeals to girls because they aren’t just interested in “what” they’re building…they want to know “why.” Goldie’s stories relate to girls’ lives. The machines Goldie builds solve problems and help her friends. As girls read along, they want to be like Goldie and do what she does.

Goldie’s toolkit is inspired by common household objects and craft items — things girls are already familiar with. Plus, the set features soft textures, curved edges and attractive colors which are all innately appealing to girls. Last but not least, the story of Goldie is lighthearted and humorous. It takes the intimidation factor out of engineering and makes it fun and accessible.

What do you think? Will GoldieBlox make it onto your Christmas list? For girls only, or also for boys? I’m not completely sure, but it seems like GoldieBlox are aimed at a younger group than the Roominate toys we talked about last year.

That last paragraph of the quote makes me cringe a bit. Do all girls like ‘soft textures’ and ‘curved edges’? If so, does that mean boys can’t or won’t want to play with GoldieBlox? If not, will it put boys off unnecessarily? Or is the idea that they are well catered for with all the Lego out there?

Thanks to Frank for tipping me off. I’m keen to hear your thoughts. 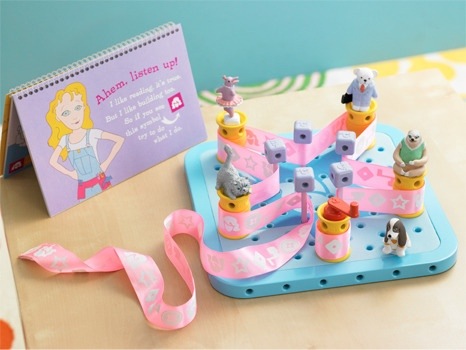 Want to see more toys for future engineers? Take a look at our post on the Roominate, which encourages girls to build and decorate a house including doing the electrical circuitry. There’s also Architect Barbie to check out!

If you’ve got other tips of toys aimed at encouraging girls into science, technology, engineering and mathematics, please leave a comment.