Over Christmas, my Dad discovered Alex Archer. Following our family tradition of combing each other’s bookshelves for treasures to steal (in my case) or borrow (in his), he came across the first two books of the Alex Quartet. He chomped through them in a day or two and had to search out the next couple in secondhand bookshops on the way home since my copies were in storage.

Tessa Duder‘s window into New Zealand in the 1950s and 1960s is so evocative, Alex herself so real and her story so compelling that the Alex Quartet has captured both me and my Dad. It’s not surprising – Dad and I read a lot of the same stuff – but I think it demonstrates just how good these books are as modern literature, not ‘just’ young adult fiction. 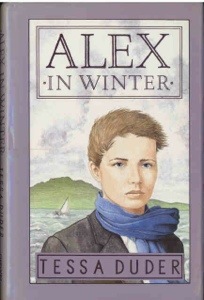 Alex is a stubborn, gifted, independent thinker in an age of grey conformity. At least she has plenty of socially acceptable avenues for her talents, from being a contender for national swimming titles to tearing up the hockey field and jumping on stage at any opportunity.

She bikes from her modest, crowded home to swim miles in the chlorinated salt pool in downtown Auckland and bikes to school with streaming eyes. She charms, bewilders and frustrates her teachers, then bikes home to eat all the family budget can supply. She is exhausting, winsome, rough-edged and one of the most satisfying characters in young adult literature.

In the year or so leading up to the Rome Olympics, her curiosity and drive strain against the stifling expectations of her school, sporting officials and wider society. Who knows where her limits are, if she can just keep pushing past everyone’s disapproval to find them?

I don’t want to say much more for fear of spoilers, so I’ll leave it there. If you’ve read the books or don’t mind knowing the broad arc of the story, Karen Healey has written this beautiful piece on Alex. Actually it’s so good I’ll have to include some of it here:

So far you’re going, “Um, okay, so it’s books about a swimmer?” But imagine this. Imagine you’re a twelve-year-old girl, and you pick up a book, and you meet a fierce, brilliant, fifteen-year-old girl, with so much talent she doesn’t know what to do with herself, who makes frequent mistakes, who gets into trouble every time she opens her mouth, who is often sullen and reckless, who cries and feels and hurts at injustice done to her and others but is also, when she is her truest self, incandescent. A girl who says, in a period when girls didn’t say this: “I’m going to be a lawyer. I’m going to be a sportswoman. I am going to be everything.” A girl who does the right thing, and not the glorious right thing, but the kind of right thing that could and does get her in ugly, dull difficulties. And she’s not noble and pious about it! Frequently she’s just plain pissed off!

Tessa Duder sat down and wrote entertaining, finely crafted, perfectly paced and not at all didactic books about a girl swimmer that tackled institutionalised sexism and racism, and competitiveness, and pushy parents, and shotgun weddings, and sexual assault, and women wanting to be doctors and lawyers when they should have wanted to be nurses and secretaries, and high school drama, and university drama, and national identity. And dreams, disappointed and fulfilled. And ambition, pure and blazing.

Alex Archer walked into my head when I was twelve years old, and she never went away.

I haven’t been able to listen to this on my iPad, so can’t comment on the spoilerness of it, but if you want to hear Tessa Duder talk about Alex and ‘the art of creating heroines for young women’, here’s a talk she gave that was broadcast on Radio New Zealand National recently.

I’ve just reread the quartet now that my books are all out of storage. It’s better than I remembered or said above.

Tessa Duder has captured the disorienting teenage task of finding out what you are actually like. Alex is so unaware of who she is and so unable to captain her emotions and behaviour that she becomes an unreliable narrator and we have to see her through her uncomprehending observation of how other people are responding to her.

Luckily the last two books of the quartet are shared between her voice and another’s, adding colour and change, and also a second character to fall in love with and keep close for years to come.

I wept through the final chapter, relieved, proud and happy for Alex and her new world, and delighted to read again the clever and satisfying epilogue in the form of entries in a New Zealand Who’s Who.

Alex doesn’t know herself, really. She a kind of unreliable narrator because she is so blind to many of her stre