The Sacrament of Housework #3: Did Jesus Value Housework? 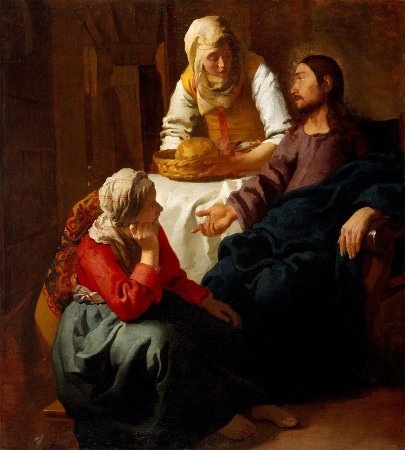 38 As Jesus and his disciples were on their way, he came to a village where a woman named Martha opened her home to him. 39 She had a sister called Mary, who sat at the Lord’s feet listening to what he said. 40 But Martha was distracted by all the preparations that had to be made. She came to him and asked, “Lord, don’t you care that my sister has left me to do the work by myself? Tell her to help me!”

41 “Martha, Martha,” the Lord answered, “you are worried and upset about many things, 42 but few things are needed—or indeed only one. Mary has chosen what is better, and it will not be taken away from her.”

If you’ve ever heard the story of Mary and Martha, you’ve probably heard it said that Mary ‘chose the better part’ by ignoring the housework and sitting at Jesus’ feet instead, and we need to do likewise.

If you’ve ever heard that spin on the story, you may well have thought to yourself that anyone who can so breezily ignore the dishes perhaps never has to do any!

Is Jesus really saying that housework is unimportant? What does that say to those of us who spend a lot of our time doing it?

Forgive a brief return to the basics of how to read a text – any text, but in this case a biblical one. Rule Number One: look at the context.

The story of Mary, Martha and Jesus comes immediately after the famous fictional story of the Good Samaritan, in the middle of Luke’s account of Jesus’ life.

Luke is deeply concerned, throughout his book, with showing his audience how Jesus included outsiders (the poor, women, the unfashionable, foreigners) and valued hospitality.

One feature I love about how Luke arranges his material is his pairing of similar stories, one featuring a man and the other a woman.

It starts right at the beginning. In chapter 1, Luke pairs two angel visits, one to Zechariah, the other to Mary. When Jesus is a baby, we see both Simeon and Anna prophesying over him. In chapter 7 we hear that Jesus heals a centurion’s servant. What follows immediately in Luke’s account? Jesus brings a woman’s son back to life.

And in chapter 10, we hear the story of the Good Samaritan.

Like many Jesus told, it’s a triangular surprise story, with three key characters (or classes of character) who are contrasted. Here Jesus compares the supposed good guys (the priest and the Levite) to the supposed bad guy, a Samaritan, who loves his neighbour and offers the kind of inclusive hospitality Jesus says gets us into heaven.

This context – the big picture of Luke’s emphasis on hospitality and inclusion, and the immediate context of being paired with the Good Samaritan story – shows what Luke’s point is in relaying the story of Martha and Mary.

Luke didn’t think this was a story about housework, but about hospitality.

It’s true that Mary is the hero of this triangle. She is certainly given the praise. But this is a triangular surprise situation, and it’s only surprising because Martha is set up as the hero at the beginning: she’s shown opening her home to a homeless, travelling teacher. She’s being hospitable, and that is the very best thing you can do in Luke’s book.

But as the day wears on, Martha’s hospitable vision derails a little. She’s so busy doing napkin origami that she’s forgotten to spend any time with her guest. Luckily her sister, Mary, is there to do that – and it’s her hospitable company that gets her those warm words from Jesus.

So the only kind of housework Jesus is against, here, is the kind that gets put ahead of people. He would rather have friendship in a messy house than be lonely in a spotless one. He’s not saying no one should be doing housework at Mary and Martha’s house. He’s saying that clutter and mess are fine to ignore when there’s a friend to be made, a stranger to be welcomed. The hospitality he champions doesn’t appear in Good Housekeeping.

One of my favourite moments of being a pastor was hearing this story come up, more than once, in our church life together after I preached on it.

We were spending Lent focusing on hospitality, both in Luke’s gospel and in our own homes. Each Sunday we made time for stories about our own experiments with hospitality. The week after I told the Martha story, a lovely woman at West Baptist bravely told us all how she had been surprised by late afternoon visitors that week. She had wondered anxiously how she could invite them to stay for tea when she had nothing planned that she would normally serve guests. Then she remembered Jesus’ praise of Mary, and offered her guests a warm welcome and an ordinary dinner. Brilliant! Just brilliant.

I’d love to hear your thoughts on all of this. Mary, Martha, hostess disasters and warm welcomes. What do you think?

This is the third post in a series on recategorising housework as a sacramental activity – somewhere God can be keenly experienced. Here are some of the others:

The Sacrament of Housework #1: Psalms, Proverbs and Dishes

The Sacrament of Housework #2: Pay it Forward

The Sacrament of Housework #4: My 11 Best Stolen Home Organisation Tips

The Sacrament of Housework #5: My 6 Best Housework Tips (and lots more of yours)

There are plenty of ways to join the conversation and keep in the loop. You can follow me on Facebook (for extra links and resources, daily), Pinterest (for link-plantations including this board on green cleaning) and Twitter (for bursts of ranting and raving). 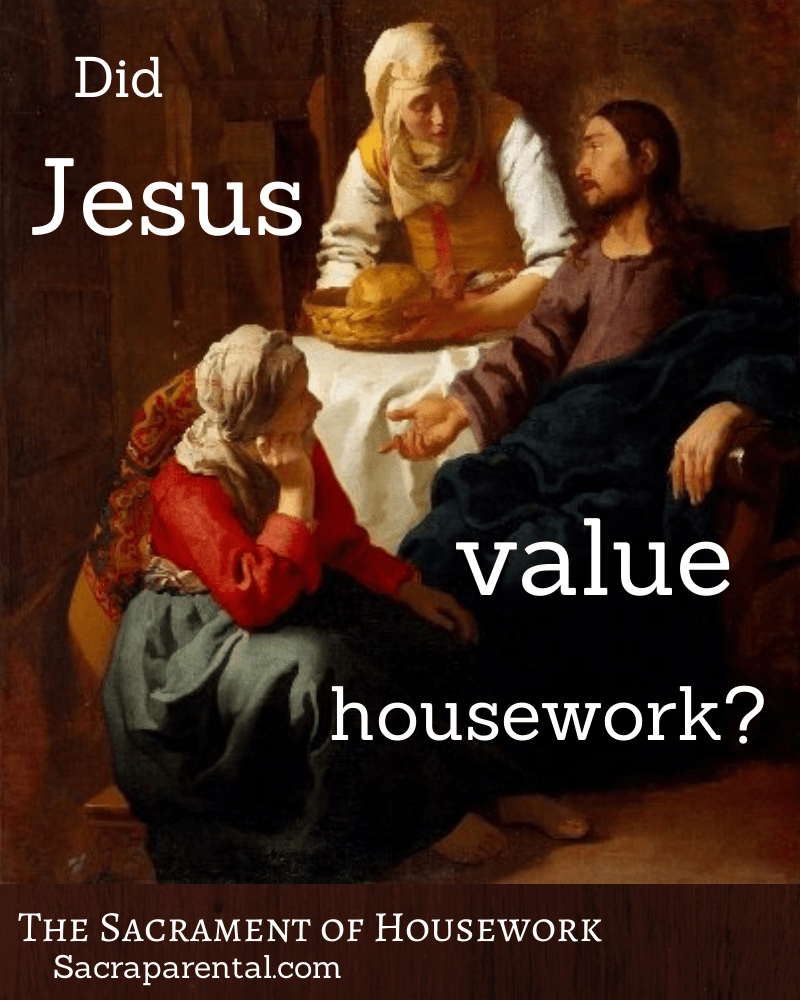 4 comments on “The Sacrament of Housework #3: Did Jesus Value Housework?”