Child Marriage, Child Death and What You Can Do

Trigger warning for discussion of rape and child marriage.

The tragic, terrible death of an eight-year-old Yemeni girl made international news this week. You might have read reports that a little girl died from injuries she received during wedding-night intercourse with a 40-year-old man who had just married her.

Coming from a much more fortunate part of the world, I found it hard to even type those words. ‘Wedding-night’? How can a grown man think he has ‘married’ a child of eight and has the right to impose sex on her? Surely it’s not just my cultural worldview telling me this child could not meaningfully consent – to marriage, let alone sex – and this was therefore rape. And homicide.

The original Reuters article gives this context to the tragedy:

European Union foreign policy chief Catherine Ashton urged the Sanaa authorities on Friday to investigate the case “without delay and to prosecute all those responsible for this crime”.

In a statement, she said the Arabian Peninsula country should reinstate a law setting a minimum age for marriage.

Many poor families in Yemen marry off young daughters to save on the costs of bringing up a child and earn extra money from the dowry given to a girl.

According to the United Nations around half of Yemen’s 24 million people lack sufficient food and access to safe water.

Under international norms such as the Universal Declaration of Human Rights, every person regardless of their age must give their consent before they can be married.

So I’ll add to my outrage that a middle-aged man thinks it’s appropriate to marry and have sex with a little girl some more outrage about extreme poverty, crippling or corrupting dowry systems (depending on whether a girl’s family pays or receives it), governments that don’t respect their international promises (note the call for Yemen to ‘reinstate’ a minimum age for marriage) and the general oppression and devaluing of girl children in much of the world. 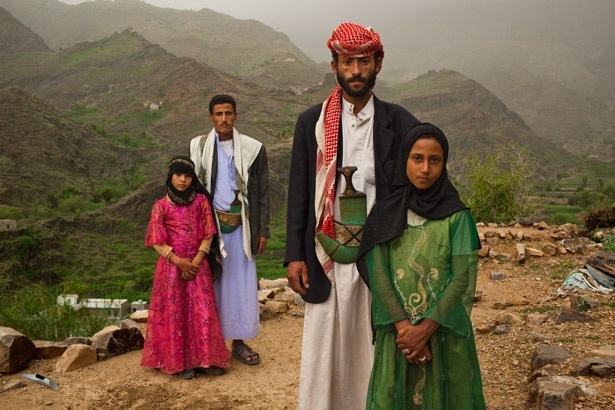 Child marriage (defined internationally as marrying under 18) is a dangerous thing for girls for all sorts of reasons. Some facts and figures from the International Center for Research on Women:

Girls younger than 15 are five times more likely to die in childbirth than women in their 20s. Pregnancy is the leading cause of death worldwide for women ages 15 to 19.

Girls who marry before 18 are more likely to experience domestic violence than their peers who marry later. A study conducted by ICRW in two states in India found that girls who were married before 18 were twice as likely to report being beaten, slapped or threatened by their husbands than girls who married later.

Child brides face a higher risk of contracting HIV because they often marry an older man with more sexual experience. Girls ages 15 – 19 are 2 to 6 times more likely to contract HIV than boys of the same age in sub-Saharan Africa.

After marriage, young girls’ access to formal and even nonformal education is severely limited because of domestic burdens, childbearing and social norms that view marriage and schooling as incompatible.

If you, like me, are appalled to hear that there are now around 67 million under-18s around the world who are married, and that 36 per cent of girls in Niger are married under 15, you may be feeling both sad and helpless. I don’t want to just spend time feeling bad about these horror stories (though lament in itself is a helpful and holy thing) I want to talk about them so we can stop them happening.

So what on earth can we do, you and I?

You may be in a position to work directly with poor communities or governments or with girls who are mistreated like this. If you already are – please tell us! I’d love to hear what you’re up to.

If not, the role most of us can take is in supporting the professional change-makers like the ICRW and the United Nations who are influencing governmental and community transformation. Tellingly, the ICRW’s ’10 things you can do to end child marriage’ are all about supporting their work and spreading the word.

So let’s spread the word. Child marriage isn’t just about different cultures having different ways of making families. It’s about taking girls’ choices away and endangering their lives.

Child marriage is often both a symptom and a cause of poverty, so supporting international movements of social justice will give girls and their families more choices. Lack of education is highly correlated with early marriage in the poor world. Send a girl to school and she’ll do the rest.

If you want to put your money where your outrage is, Girls Not Brides has a system of connecting people with member organisations to fund specific projects to end child marriage. But probably whatever international charity you are most familiar with will be working to give girls better lives, so you could just give World Vision or Tear Fund a call and ask how your money can best be used to stop tragic abuses like the one in Yemen.

Maybe you could look at this map of where child marriage is most common and support general poverty eradication in one of these places. This UNICEF report on action in Mali shows what can be done even in the hardest countries. 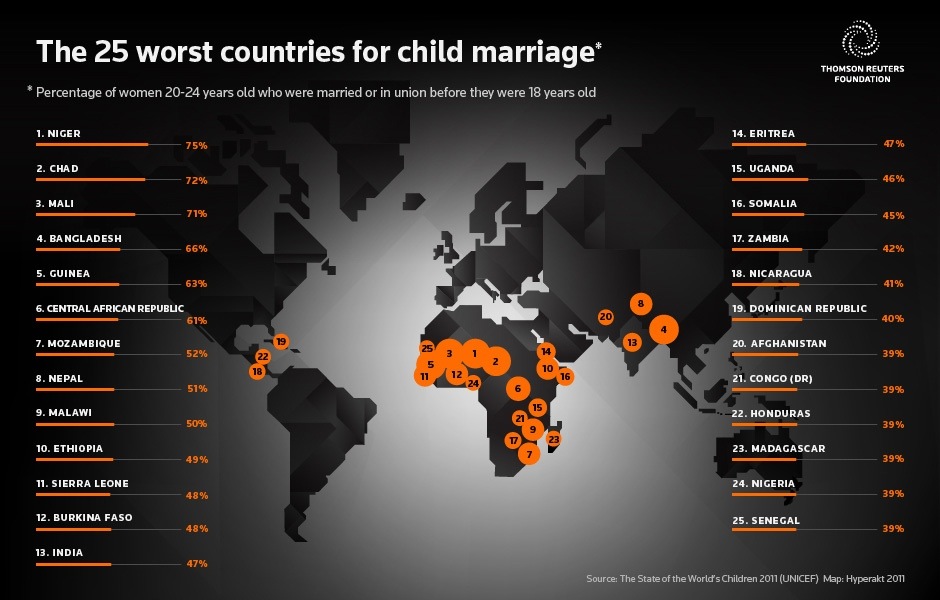 Last October, the first International Day of the Girl Child was observed, with a focus on ending child marriage. I really loved these short videos made for that occasion, pointing out that girls aren’t just victims to be protected, but also the solutions to a host of problems. Girls are awesome!

These girls are just like the little girls in our neighbourhoods and families. They’re born into unlucky circumstances, but we get to change that luck.

Turn your outrage into action. Examine your charity giving and see if some of your money can go to change the lives of these girls. Spread the word on child marriage and what it really means for girls. Follow the links to advocates and activists and share their work. Share this post using the buttons below. And if you have any other ideas to share, or just some anger to vent among friends, please do so in the comments.

It’s got to stop, and we can help stop it.

5 comments on “Child Marriage, Child Death and What You Can Do”