‘It Hurts Because it Mattered’ 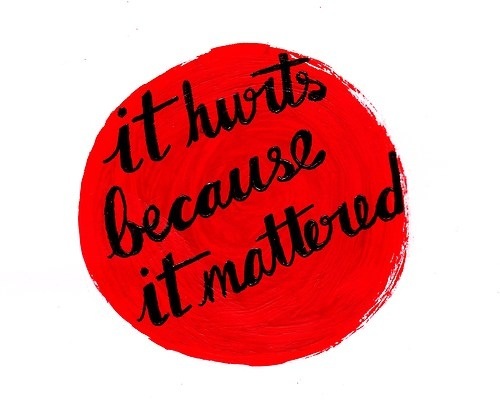 Add this to your list of empathetic things it might be appropriate to say to someone in pain (though we’re usually better to say very little, and just listen well and offer a hug): it hurts because it matters.

This is from author John Green (he co-wrote the charming and brilliant Will Grayson, Will Grayson, among other things). He said in a vlog:

I said to someone I know, ‘I don’t know why this hurts so much.’

And she said, ‘It hurts because it mattered.’

That was a huge thing for me to realise. That there are things in life that hurt, and that they hurt because they were important.

John Green gives a bit more context and reflection on his tumblr:

It was my supervisor who finally helped me understand why I was so sad, and that I should feel sad. So often we try to make other people feel better by minimizing their pain, by telling them that it will get better (which it will) or that there are worse things in the world (which there are). But that’s not what I actually needed. What I actually needed was for someone to tell me that it hurt because it mattered.

I have found this very useful to think about over the years, and I find that it is a lot easier and more bearable to be sad when you aren’t constantly berating yourself for being sad.

What do you think, friends?

Use the ‘follow’ button on the right to get an email (or WordPress notification) when a new post goes up, or if you’re on Facebook, click ‘like’ over on the right to connect to the Sacraparental Facebook page and get new stuff every day, including plenty of extras that don’t go on the blog proper. See you around!

5 comments on “‘It Hurts Because it Mattered’”