Before You Get Engaged

Are you ‘courting’? ‘Going steady,’ as they said on Happy Days? Or my favourite early-twentieth-century ‘walking out together’?

Yay! Enjoy it! What a very pleasant time of life, whatever you call it. 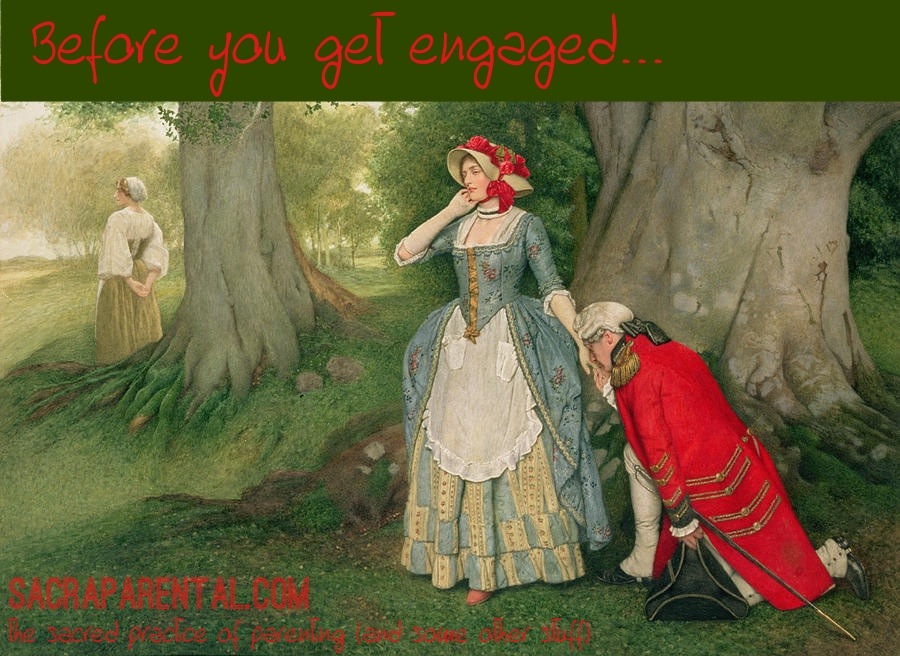 The best piece of advice I have for you – just on the off-chance that you are in the market for some, and from me – is two-fold. Most importantly, do some formal marriage/relationship preparation (definitions later) before. And to get the most out of it, do it before you decide to get engaged or otherwise committed. Have serious conversations with wise people before the invitations are printed.

In church circles especially, it is common for engaged couples to meet with their minister or someone else for a few sessions of ‘marriage preparation.’ It’s a great idea that needs to spread, and I guess this post is partly about how helpful marriage prep courses are, if they’re a new idea to you, and if not, an encouragement to use them as pre-engagement rather than pre-marriage tools.

Just because two people are in love doesn’t mean they know how to be married, or how to be married happily, for the rest of their lives. The skills that couples need to build a fulfilling, resilient marriage often take some learning and practising, and if it’s worth spending heaps of energy and time on planning a wedding, it’s probably worth doing the same to plan the actual marriage, right?

Good marriage preparation sessions will explore couples’ differences and similarities, the areas they are strong in and those that need some work. Communication, conflict, sex, finances, kids, roles in the relationship, family dynamics, leisure time – these are all good things to talk about before taking the plunge. If one or both partners have experienced addiction, abuse or other tragedies, it will also be valuable to talk about them in the context of your relationship.

But let me tell you when is not a great time to talk about these things. The three weeks before the wedding day. Not only do you have To Do lists overflowing your pockets, but what if you discover in these conversations that there’s stuff you’d really like to spend more time on before getting married? If the dress has already been made and the caterers booked, it’s pretty tough to decide to postpone or cancel the wedding.

It’s much better to have this kind of serious conversation before engagement, when the stakes are just a bit lower and the time is freer. You can talk with a trusted person or couple about all that leads you towards marriage while it’s still an open question. Extra spin-off: you can learn and practise communication and conflict resolution skills before you get to the (for most people) extremely stressful period of actually planning a wedding.

My now-husband and I followed this advice, which originated, years before, with my youth pastor. We did a marriage preparation course called Prepare-Enrich with some good friends who had trained in delivering it. At the time, we knew marriage was a possibility but we weren’t at the point of deciding for sure.

The course took us, step by step, through our strengths as a couple, and the areas where we had significant differences in our attitudes or experiences, and the things we hadn’t talked enough about (like finances – still true!). It gave us slightly-artificial-but-actually-very-helpful communication tools that we still use when we’re talking through something significant or sensitive. It gave us confidence, when we did decide to get married, that we were making an informed, wise choice, as well as acting from the heart.

Since then we have both trained as Prepare-Enrich facilitators and have had the great privilege of meeting with three different couples as they were preparing not just for their wedding but for their marriage. It has always been a brilliant six or eight weeks of enjoyable, enriching conversations, even for those people who go into the process a bit sceptical. Every time, we get just as much out of it for our marriage as the other couple does for theirs. We’re available to do more, if you’re interested! 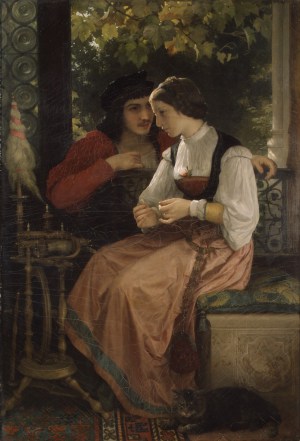 I don’t know of anyone outside church circles who has done this kind of formal marriage preparation, though I’m sure there are some. I’m keen to hear from you about your experiences of learning how to be in committed relationships, before and during, and what you would suggest to courting couples about making the next step.

What advice would you give? What did you do? If all this is still ahead of you, what do you think of the idea of marriage preparation courses? You are most welcome to join the conversation below!

Don’t want to miss a thing? Remember you can subscribe using the button on the right-hand sidebar, and join the Sacraparental Facebook page for daily extras.

The painting in the top image is The Proposal by James Dromgole Linton.