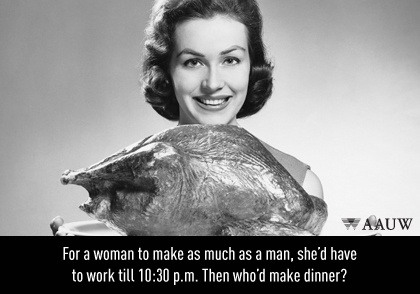 I didn’t get it before I had a baby. And now I really, really don’t get it.

One of the ‘reasons’ women as a group, in all professions, all areas of paid work, are paid less (per hour) than men is that so many women ‘take time out of the workforce’ to raise children. This is such a strong trend, don’t you think we should finally make allowance for it in our economic and work structures? If we think the human race should continue to reproduce, that is.

It’s one thing to give up the income of the years spent raising kids, for no pay – though that may not be a brilliant way of organising society, either, I have to say – but it’s another to lose the years of rising up the pay and seniority ladders in your workplace. The pathetically low numbers of women in the very top jobs is partly due to this effect. Take five or ten years out, and you may never catch up to your colleagues who haven’t.

I do understand that a surgeon, say, who has never stopped working simply has more surgical experience than one who has raised children instead of scalpels for a few years. But the surgeon who has spent time at home with kids may well have, in that time, developed much better clinical skills in areas of communication, organisation, self-control, stamina and empathy than her colleague. I mean this in all seriousness – I’m not being cute or flippant.

Trying to get inside the head of a two-year-old, for twelve hours, so you can successfully negotiate the day with everyone’s sanity and property intact – and then do it again tomorrow – gives these skills a serious workout. The vast majority of my time spent mothering isn’t niche stuff that won’t be useful elsewhere. Motherhood stretches my transferable skills.

So even in a profession heavily reliant on technical skill, it’s entirely possible that a period of time working as a parent rather than a surgeon could be meaningful professional development, if only it were seen – and supervised – that way.

Staying with the high-powered area of surgery, notorious in most countries for being unfriendly to part-time work or ‘taking time out,’ let’s imagine a surgeon who takes time out of theatre for a year or two to get an MBA so she can run the department, and another who takes time out to do some medical research.

If these doctors return to full-time surgery, they might need to spend a few months getting back up to speed, but they’ll be pretty surprised to be treated as people who abandoned their profession and should have a paycut or slide down the promotional ladder. They’ve done meaningful work and gained relevant skills. Why treat them as being years ‘behind’ their colleagues?

Hordes of full-time parents have made these arguments before, either to say that caregiving should have a place in the paid economy (a topic for another day), or that it needs to be respected as a substantial, skilled job. I have a soft spot for this infographic, for instance:

But what this kind of breakdown doesn’t capture is what goes on inside the brain of a parent raising children. We joke about our brains turning to mush through too many cartoons or too little sleep, but the truth is, for lots of parents I know, time at home is rich with deep thought.

The blogosphere is a new collection of evidence of this. Please spend ten minutes reading Andie at blue milk, Lucy at Lulastic and the Hippyshake, Jane at Nothing by the Book, Angela at The Sponge, or Emily Writes‘ prolific, virtuosic output as a new mother, and try telling me with a straight face that when they ‘return to the workforce’ they should have to pick up where they left off because they’ve had their intellectual lives on pause for years. Absolute nonsense.

Their before-kids paid jobs were, as far as I can tell, economist, activist, journalist, national director of a charity, and journalist, respectively, and mine was a church pastor. I can easily tell, reading their work and knowing my own life, how all of us will be better at those sorts of jobs in the future because of time spent raising our children.

That would be even more true if our respective employers or professional bodies recognised the phenomenon and offered structured ways of belonging to the profession throughout our time at home. Imagine if each of us had occasional formal mentoring from people in our field to help us bring relevant insights out of the experience of parenting.

I gather that in the United Kingdom civil service, you can take a ‘career break‘ (those doing this should feel free to correct the details and add your perspective in the comments, please!) where you come back to your workplace for a couple of weeks each year and participate in some professional development to keep your hand in.

When you’re ready to come back, perhaps years later, your old job might not be there (unlike with conventional, shorter parental leave provisions), but there will be a matching one, and you won’t be completely out of the loop. This seems smart to me. You do, however, return at the same place on the pay scale you left at, so this only a partial solution to the big problem of gender pay differences because of breaks for caregiving.

I’ve tried to make this kind of scheme up for myself. I’m not pastoring a church, but writing this blog has enough intellectual overlap that I don’t feel like I’ve entirely stopped being a pastor.

I’ve kept involved in denominational leadership by being on boards and speaking at conferences. I am a mentor for several people working in the field. I do guest preaching and I’ve just finished doing a five-week ‘locum’ for a friend, working part-time for his church while he’s on leave.  If I just added a formal mentor or supervisor to that portfolio of activity, and some formal learning goals, I should surely be able to call these years of motherhood a continuous part of my life as a pastor. What do you think?

I spend most of my day interacting with a toddler, not ‘talking about Jesus’ as my son calls preaching and pastoring. But I think it’s clear from the Sacraparental archives that I find plenty of pastor-y richness in life as a mother. The transferable skills I am stretching in my parenting, added to the connections I’m keeping up in my professional world: don’t you think they should add up to something other than ‘a break from the workforce’?

All of this doesn’t even consider the fact that if we as a society want humans to have children and raise them, then we need to have social structures that incentivise that behaviour. If women continue to be penalised professionally for the biologically vital work of raising children, something is terribly and dangerously wrong.

I would love your comments on this. Parents, what have you learnt or practised through raising kids that is transferable to paid work? Employers and others, have you seen this in action? Economists, biologists, and others, what’s your perspective on the social structures that lead to gender pay gaps Have you seen the Sacraparental Facebook page? Check it out and hit ‘like’ if you do! There’s new stuff on there everyday.

I also have Pinterest boards on a few niches like Gender Politics and how to Change the World, among other things, and you can follow me on Twitter for more ranting and raving, particularly on things like feminism, politics and social justice.

4 comments on “Parenting as Professional Development”