Vocation: More than a Job [Guest]

A warm welcome to Lyndon Drake! He’s writing for us today about integrating our professional/work lives with the rest of our sense of calling to follow Jesus. This is the core of Sacraparental, really, seeing all of the things we do in our lives as part of the sacred whole.

Lyndon is married to Mim, and they have three boys. As a Carey Baptist College staff team member Lyndon heads up Vocation, and he is also pastor of the All Nations congregation at the Auckland Baptist Tabernacle. Before studying theology, he was a Vice President at Barclays Capital in London, where he worked for a number of years as a government bond trader. 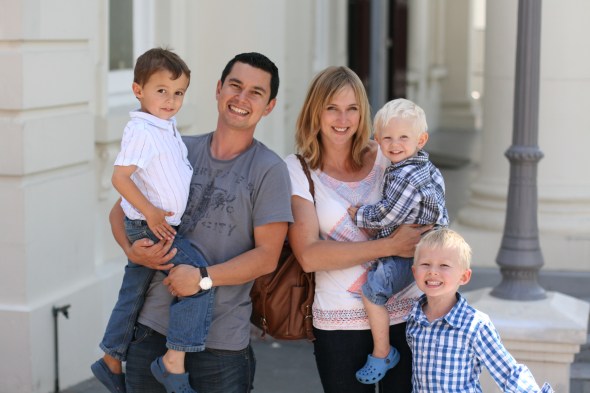 For Mim and me, our Sunday morning on the 14th of September 2008 began like any other. Our first son had been born a few months ago, and we’d started to adjust to the routine of getting a small child ready to leave the house. We caught a bus along Roman Road, heading for our church in Bethnal Green.

As the bus crawled through the quiet, Sunday morning streets, my boss phoned me. My job was to trade interest rate products — bonds, swaps, and other derivatives — for Barclays Capital.

When we’d left the office on Friday evening we knew that Lehman Brothers was unlikely to survive much longer, and my boss was calling to let me know that things looked pretty bad. He was heading into the office and asked me to come in after church, so once the church service was over I went down to our office in Canary Wharf.

When I got to work, the normal noise of the trading floor was nonexistent. My boss and I got to work, gradually calling in extra staff as we needed them. Up until this point, many people believed that the idea of a large bank like Lehmans failing was unthinkable. Our own view had been more pessimistic, but we were still faced with the largest unwind of derivatives trades ever undertaken. We worked into the early hours of Monday morning, and I headed home for a couple of hours sleep before returning around 6am.

Here’s the question for you: what difference does it make being a Christian in this situation?

In many ways, I wasn’t doing anything different from my colleagues. All of us were working hard, all of us were using the skills we’d developed, and all of us were trying to do good (in this case, prevent the collapse of our own bank, and indeed the wider financial system).

The reason my boss called me to come in, rather than one of my other colleagues, wasn’t because I was ethically superior but simply because I’d developed some slightly arcane knowledge about financial derivatives and our computer systems that turned out to be useful—in other words, I was a geek!

In fact, throughout my career I struggled to figure out what a distinctively Christian approach to my job in finance would look like. Looking back, while I have a mixture of happiness and regret around my efforts, I also wish that I had been better equipped to work as a Christian.

Where I think my Christian background gave me some preparation was around the areas of ethics, evangelism, and how to approach money. Christians are often encouraged to behave well in the workplace—at one level, not to cheat or steal, or more positively to behave honourably. The risk is that we reduce the Christian faith and message to one of behaving better than non-Christians. And we realise that we fail: for example, I deeply regret the way I treated some people unkindly.

Churches often promote evangelism in the workplace, although I have to say that I had no success at it! I think the challenge here is that being honourable about our use of time (or as time goes on, authority) at work seems to be inherently in conflict with effective evangelism.

When it came to money, I found my church setting very helpful in dealing with being in a highly-paid job, as we were in a deprived area of London and it was impossible to be insulated from the needs of the poor. While I was fortunate to have that setting, I also think the Western church needs to hear more sharply the challenge of Jesus around wealth.

Not only could we do better in how we prepare people around ethics, evangelism, and money, the church is often ineffective when it comes to equipping Christians to understand the value of the actual work they do.

Christian theologians have long recognised that when someone teaches a child, cares for a sick patient, or trades bonds for a bank, they are doing something valuable in God’s sight. But that insight is often absent from teaching in churches. As a result, there can be little genuine reflection on how to work well as a Christian, why developing skill and craft is worthwhile, and how different forms of work contribute to building the kind of society that God desires.

It would be rare, I think, to hear a sermon on money where the preacher was able to apply the message in a positive way to jobs like accounting or banking. In other words, Christians are not often helped to understand how their job is a calling from God. It is rare to hear that even in general terms, and rarer still to hear a detailed explanation of how the particular work that a banker, a designer, or a teacher is good.

I want Christians to know why they are at work, and how to do their job in a distinctively Christian way. This year, I will be leading a new course called Vocation which will equip Christians for the workplace. The course is designed for those already in work, and you can find out more about it at http://vocation.ac.nz/.

And, much as I’d love you to sign up to the course, I realise that it’s not an option for many people. A great book on the subject is by Tim Keller and Katherine Alsdorf, called Every Good Endeavour. And if you are in Auckland, you might want to put Saturday the 12th of April in your diary, because Katherine Alsdorf will be speaking at a special event that evening.

I’d love people to engage in the comments about their own work setting. Perhaps Thalia will reflect on that overlooked workplace: the home? And what about your work: how do you see it from a distinctively Christian viewpoint?

4 comments on “Vocation: More than a Job [Guest]”