What’s the Point of Lent? #2: Jesus and the Early Church

This is a mini-series leading up to Lent, which begins in 2014 on March 5. You might like to catch up on the first part, looking at fasting in the Old Testament, before reading this one.

In the Old Testament, fasting is usually portrayed as a spontaneous response to what Scot McKnight calls a ‘sacred, grievous moment’.

By the time of Jesus, however, Jews were also doing regular ‘stationary’ fasting (meaning the whole community or ‘station’ did it together at the same time), twice a week. Jesus was challenged as to why his followers didn’t take part in the weekly round of fasting, so it seems to have been an expected part of Jewish culture.

Jesus did, however, famously fast for 40 days in the desert while preparing to make the career change from carpenter to Messiah. 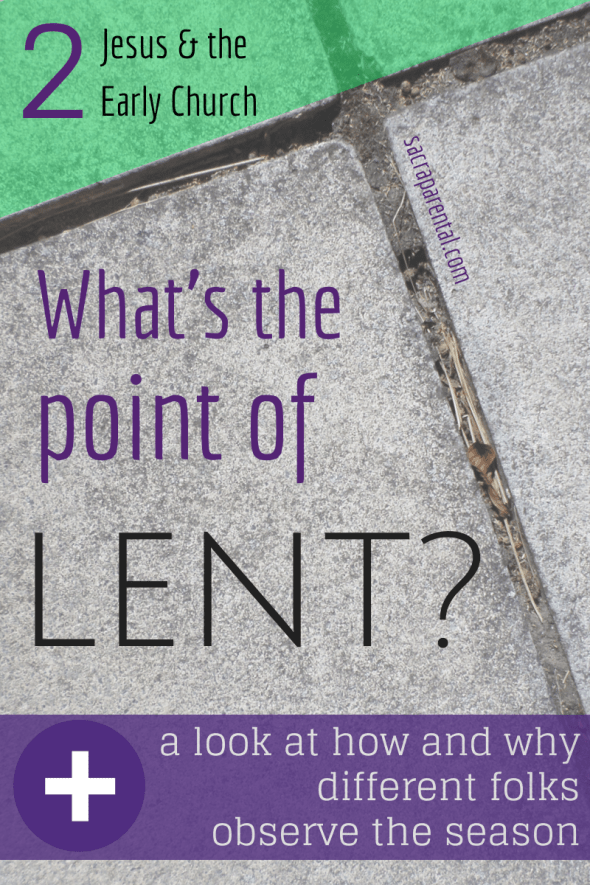 Jesus never instituted Lent. It’s the combination of those three factors – responding to a sacred moment, regular Jewish fasting, and the 40-day fast of Jesus – that led to the Lenten fast of the early church.

We know from the important first century document, the ‘Didache‘ (short for ‘The Teaching of the Twelve Apostles’), that the early church did the normal Jewish stationary (community) fast – what Scot McKnight calls ‘body discipline’ fasting. This wasn’t a response to a grievous moment but a pattern of disciplining the body for spiritual growth, based on the Jewish practice, but moved to different days of the week to distinguish the church from majority Judaism.

We also know from the book of Acts that Paul fasted for the three days between his Damascus road conversion and being baptised.

By the end of the first century, adult converts were encouraged to fast in the lead-up to their baptisms. Christians fasted twice a week and also for the morning or day until they shared the Eucharist (communion) on Sundays. By around the fourth century it was usual for converts to be baptised at Easter, and for those being baptised and their supporters to fast.

This three-way connection between Easter, baptism and fasting is one that is still strong in many parts of the world, but not in any of the churches I’m familiar with. What about where you are?

Sometime over these first few centuries of the church, a two-day fast in preparation for Easter Sunday itself – presumably this was some combination of the ‘response to a sacred moment’ fasting and a stationary, community fast – became a longer period. It varied from three weeks in Rome to seven in the Eastern church, but Scot McKnight describes a unified commitment to using Lent as:

a time of introspection, confession, penitence, and fasting to prepare for the miracle of forgiveness on Good Friday and its life-giving power on Easter. It was a time structured to respond to sin, to be purged of inordinate desires, to yearn for forgiveness, and to develop patterns of holy living.

I really like that last phrase: to develop patterns of holy living. Lent wasn’t supposed to be a once-a-year thing that clears our debts with God so we can afford to lower our standards for the rest of the year. It’s supposed to be a time when we use our collective social energy to motivate us to make life changes that will last.

It’s like having a regular programme of training for a marathon. Every week you get stronger and faster, and run further. On the days you’re not running, you don’t slip backwards, you just get ready for the next push. We are supposed to become more and more like Christ each Lent, then spend the rest of the year consolidating that progress so we’re ready for the next level of training.

Another snippet from Scot (chapter 7): it was a huge no-no to fast on a Sabbath (Saturday) or Sunday (except for Easter Saturday, the only exception). Just as Jesus said that his followers were feasting while he was with them, and could fast later, the early church made time for both (more about this in the next post on Eastern Orthodox practice). It has never been traditional to keep fasting on a Sunday – probably only people doing a modern chocolate or coffee fast feel the need to be non-stop about it!

So here are some more things to learn from the practice of Jesus and the early church, to add to the principles from the Old Testament, and help us make reasoned decisions for our own modern practice of Lent:

The next post looks at how Orthodox folks are called to mark Lent. You may be surprised by some of it – I certainly was.

I’m preparing a Lent series for Sacraparental, and now for a few friends’ churches, that is inspired by how my family celebrated Advent. Check it out here, and please feel free to let me know what you think, and what I can add or subtract to the plan.

Before Lent begins, though, it’s time to party on Shrove Tuesday/Mardi Gras

7 comments on “What’s the Point of Lent? #2: Jesus and the Early Church”