Sorry, couldn’t resist the reference to my fond 1990s memories of Kylie and Jason at 7pm, five nights a week.

Anyway. Welcome to Anna S, regular Sacraparental conversationalist, who celebrated Neighbours Day last year with great success. I’m keen to do something this year to follow up on our Pancake Party with the neighbours, and I thought y’all might be keen too, given a little advance warning.

In principle, I love the idea of neighbours.  In practice, I could do a lot better, and I have periodically wondered about how to get started being more neighbourly.

Thankfully the good people at Neighbours Day Aotearoa have done some of the thinking for me, and have provided a ready-made reason to break the ice and start talking to the people I live near.

The idea behind Neighbours Day is to ‘turn streets into neighbourhoods’, by encouraging people to get to know and support the people in their community.

A mere 2.5 years after first hearing about it, I finally had a go at organising a Neighbours Day gathering in my street last year.  I wanted to:

a.  meet people, in a setting that wasn’t too much of a burden to plan or do (especially with Auckland’s delightfully unpredictable weather)
b.  provide a space for people to connect with each other
c.  begin to understand what needs exist amongst my neighbours. 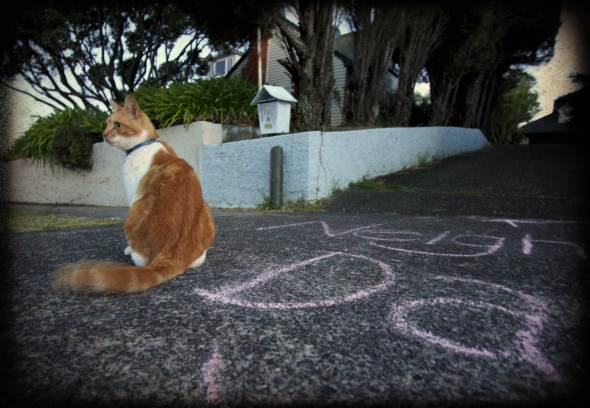 Clearly, no expense was spared in the signage for the event! (Photograph by Anna.)

With those aims in mind, my flatmates and I invited everyone in our (short) street to a potluck afternoon tea, and then waited in nervous anticipation to see what happened.

The very exciting thing was that people actually turned up!  Even Ginger the Friendly Community Cat popped in to say hello to his favourite adopted humans.  I met a girl guide leader, a 19 day old baby, a guy who has run the London marathon three times, a sousaphone seller (yes, really!) and a face painter.  Of the three dozen houses on the street, I met people from over a third of them.  Success!  Although our street hasn’t been magically transformed into a tight-knit community since then (at least, not that I’m aware of), I’ve definitely found it easier to be more neighbourly.

A year has very quickly passed since then.  The baby must now be almost 1 year and 19 days old, because Neighbours Day is coming up again on the weekend of 29-30 March, and I’m thinking of ideas for what to do.  I’m keen to hear your ideas … how have you got to know your neighbours?  What things make it easier or harder to be neighbourly?

If you are keen to give Neighbours Day a go, their website has loads of ideas for getting started.

Jump on board with Neighbours Day! As Anna says, there are lots of resources (even ready-made invitations) to make it as easy as possible at Neighbours Day Aotearoa.

Do you have stories to share about getting to know your neighbours? We’d love to hear them in the comments below or in a guest post. More from me, too, soon.