On the Thursday night of the first Easter week, an unnamed woman had a dream about Jesus:

While Pilate was sitting in the judgment hall, his wife sent him a message: “Have nothing to do with that innocent man, because in a dream last night, I suffered much on account of him.” 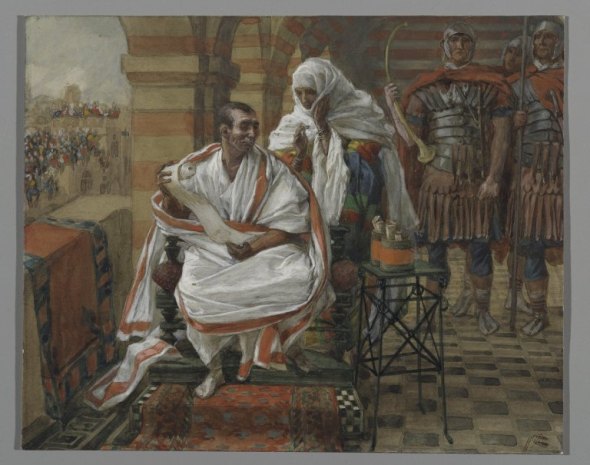 The Message of Pilate’s Wife, James Tissot, via Wikimedia Commons.

Firstly, his hands — a woman’s. Softer than mine,with pearly nails, like shells from Galilee.Indolent hands. Camp hands that clapped for grapes.Their pale, mothy touch made me flinch. Pontius.I longed for Rome, home, someone else. When the Nazareneentered Jerusalem, my maid and I crept out,bored stiff, disguised, and joined the frenzied crowd.I tripped, clutched the bridle of an ass, looked upand there he was. His face? Ugly. Talented.He looked at me. I mean he looked at me. My God.His eyes were eyes to die for. Then he was gone,his rough men shouldering a pathway to the gates.The night before his trial, I dreamt of him.His brown hands touched me. Then it hurt.Then blood. I saw that each tough palm was skeweredby a nail. I woke up, sweating, sexual, terrified.Leave him alone. I sent a warning note, then quickly dressed.When I arrived, the Nazarene was crowned with thorns.The crowd was baying for Barabbas. Pilate saw me,looked away, then carefully turned up his sleeves

and slowly washed his useless, perfumed hands.They seized the prophet then and dragged him out,up to the Place of Skulls. My maid knows all the rest.Was he God? Of course not. Pilate believed he was. 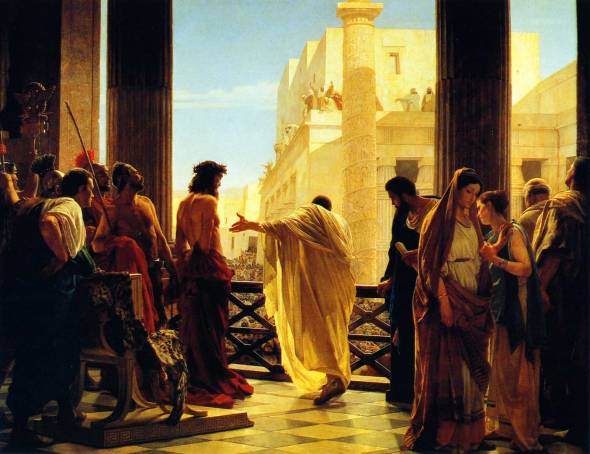 Ecce Homo/ This is the Man, Antonio Ciseri

The Women in the Bible website has a feature on the wife of Pontius Pilate.

If you’d like some more Easter thoughts and resources, there’s a handy-dandy list of all the Lent and Easter posts here.

The Easter ones I’ve written for Sacraparental and my Kiwi Families column are also here: