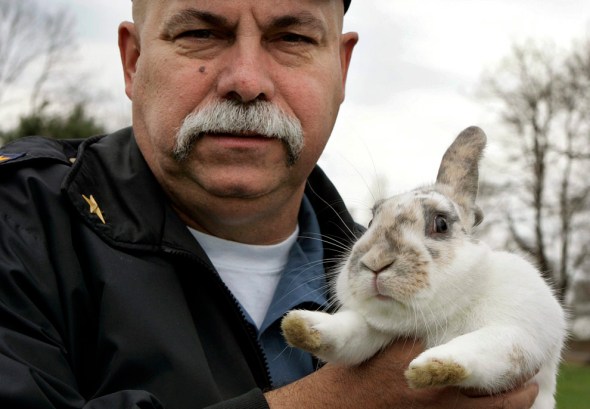 Over at The Big Picture, a fantastic news photography blog, the caption for this bunny picture is this:

Monmouth County Society for the Prevention of Cruelty to Animals Police Chief Victor Amato holds a pet rabbit named Hope, Friday, April 10, 2009, in Marlboro, N.J., that had been abandoned in the woods behind the owner’s home. The family got the rabbit last Easter. Hope is regaining its health. (AP Photo/Mel Evans)

Hope was bought by a family at Easter in 2008, but like so many people who take on pets in a moment of passing enthusiasm, the family apparently lost interest or found the bunny inconvenient.

Maybe they got sick of it pooing in the house or crying at night or nibbling the curtains, so they abandoned the bunny in the bush near their house.

Maybe they thought it would be fine, out in the open, but of course Hope had been brought up with humans and didn’t do very well left to its own devices.

No carrots left in a bowl to snack on. No two-legged company. When it was found, Hope was a bit bedraggled and forlorn.

A bit like Jesus’ friends’ hope on Easter Friday and Saturday.

There had been so much promise! Jesus had come to change the world, and show his friends and students how to join in.

Exciting times to be a Jew! In the middle of Roman occupation and widespread hardship, God had sent Jesus to sort Israel out, and these ordinary men and women could be part of it!

There was more hope among the disciples than there are Easter eggs in Wellington tummies today.

But hope can be a fragile thing. Three years of announcing the good news of a new way of living in community. Three years of backing up the talk with wisdom, healing, compassion. Three years of reconnecting the Jewish people with their God. And it ended in blood and greed and a broken body nailed up.

And that was the end of hope.

If you put your hope in something that crumbles, the resulting disillusionment and bitterness and cynicism mean that you’re worse off than you were before the hope snagged in your heart in the first place.

And that’s why I love this bunny photo and its caption. Because it turns out that Hope wasn’t lost or dead, just missing for a while.

Hope has been rescued and looked after, and the last sentence of the caption says:

And hope revived is twice as strong.

I bet Mary Magdalene’s hope and John’s hope and Simon Peter’s hope were less easily shaken after that first Easter Sunday: they now knew from experience that down is not the same as out.

The way that Jesus fought death and won gives all his team hope that we can do the same if we stick with him.

And more than that, that we can carry on putting his plans for a better world into action.

We get to be part of a redemptive movement through the world, eradicating poverty, ending loneliness, abolishing slavery of every kind.

And we who have mourned Jesus on Friday and celebrated his new life on Sunday know that hope in Jesus isn’t easily squashed.

Jesus has proved that his future is rosy and secure and he invites us to team up with him, so hope never needs to be lost again.

We’re still likely to suffer plenty in this life, because the work is underway but not nearly finished.

Cancer still invades our cells. Violence and recession and broken relationships still bring pain. But when Fridays come and we have things to mourn and lament, we know now that Sunday’s coming. 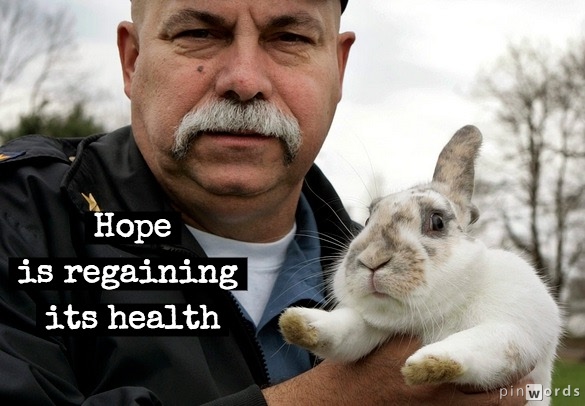 If you’d like some more Easter thoughts and resources, there’s a handy-dandy list of all the Lent and Easter posts here.

The Easter ones I’ve written for Sacraparental and my Kiwi Families column are here:

1 comment on “Easter Sunday: Hope is Regaining its Health”