I don’t have much of my own to say about ANZAC Day.

Like many of my generation I am deeply ambivalent about how to commemorate some of the most horrific events of the twentieth century.

Rather than muddle around in my own thoughts, I thought I’d share some beautiful and brutal things from friends that might help you in your own remembering-of-war, whenever that happens in your part of the world.

To start you off gently (the video at the end is strongly emotional, to say the least), here is part of Mike Crudge’s excellent reflection on what he calls the country’s biggest church service:

[ANZAC Day falling] on a Sunday in 2010, my own church gathered 4 hours later for our normal church service. Our service was focused around ANZAC Day, with an attempt to acknowledge the tension already present in our place at times throughout the last century: between those who went to war, and those that stood against it.

In our ANZAC Day focused church service we didn’t honour war and fighting.

We tried to respect the historical choices made, the people who served God and country (however they expressed this), and above all the image of sacrifice Jesus can provide for all humanity, a story familiar to many churchgoers.

Most churches in our country struggle to engage with New Zealand society and culture, in fact we’re failing at this. ANZAC Day is something of a national gift in the annual cycle we follow: Lent, Easter, ANZAC Day, Pentecost…

In New Zealand, ANZAC Day is the only non-religious day where most shops are legally obliged to close. I guess that says something about the quasi-spiritual feelings many people about war.

Coffee with a Turk

The poet, thinker and cartoonist Michael Leunig has written more than once on the conundrum of ANZAC Day – made even more complex in a multicultural society such as Australia, where former ‘enemies’ are now neighbours:

I KNEW A TURKISH MAN WHO owned a coffee shop around the corner from where I used to live.

Ten Anzac Days ago I went to his shop for a morning coffee to be greeted by his wicked smile and twinkling eyes. “Good morning Michael,” he said, “Happy Anzac Day. This is the special day,” he declared with mock formality, “to remember that all invading armies must be thrown back into the sea.”

I have to say, it was not such a bad way to start the morning.

And Anzac Day has been turned into what? Somewhere buried underneath the new carpark at Anzac Cove is an ordinary human heart. But all this spiritual inflation and emotional conscription – the modern media event, the manipulation for political advantage – they’ve put a big thumping hoon outboard motor on the back of a tragedy.

Anzac Day, it seems, must now be done with bluster, hoopla and media hypnotism. Like the landing and the campaign itself, there is something appalling about this in the eyes of many Australians new and old – some disgraceful misuse of humanity by the wielders of political and economic power.

On Anzac Day, coffee and jokes with a Turk might be the most meaningful and fair dinkum dawn service you could possibly have.

[That’s the start and the end of the article. Read the full piece at The Age. Thanks to Jody for suggesting I look for Leunig’s war writing.]

In an earlier article, Leunig writes strongly about the imbalance between remembering those who fought and remembering others. For a pacifist perspective of war memorials – and if you don’t mind risking offence if you feel strongly about honouring soldiers – you can read that piece here.

A Short Film (grab your hanky)

Poppy is a short film based on the writer’s great-grandfather’s experience of World War I when he and his mate found an orphaned baby. It’s a tough watch. If it doesn’t play for you below, you can find it online at NZ Onscreen.

Many thanks to Brenda from Cityside Baptist who said they watched this as part of their Sunday gathering one year. They pondered and discussed questions of goodness, redemption, hospitality and mercy.

This New Zealand website commemorates people who suffered while working for peace.

After an evening of reflecting on all of this – my husband is preparing to lead a prayer service at dawn – I found I did have some things to say.

Some of them will wait for another day, but here’s one thing from me: my prayer for ANZAC Day, for, I think, pretty much all of us.

God, you are perfect
and reach out to us in our imperfection.

We are at our most imperfect in war
and need your reaching out even more.

We ask your close care for all who suffer in war.

God bless and keep the fighters, willing and unwilling
who bear scars on the inside and outside.
Give them peace.

God bless and keep the objectors
who stand and fall for non-violence.
Give them peace.

God bless and keep the children whose childhoods war steals.
Fill the gaps with your boundless and eternal love for them.
Give them peace.

God bless and keep the victims of war
Invaded, assaulted, bereaved.
Give them peace.

God bless and keep all imperfect humans who are complicit in war,
The leaders, the followers, the cheerers, the beneficiaries.
In your perfect, generous, strange love and mercy,
Give us peace. 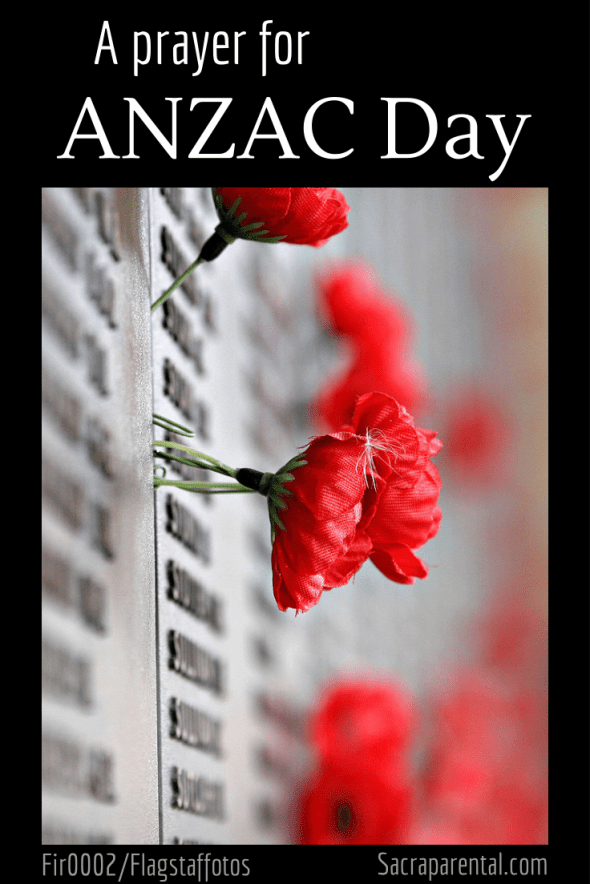