It’s an odd feature of my experience of postnatal depression: I find reading modern literature, which is usually my staple, too hard, most of the time.

It’s mostly because of the unflinching subject matter. I love Kate Atkinson’s writing, and thought last week – after three months of re-reading Patrick O’Brian’s marvellous Master and Commander series – that I could tackle her newish Life After Life. It’s structured around the many restarts of Ursula’s life. Chapter after chapter, she dies, gets another birth (as the same person) and things go minutely differently.

Atkinson is particularly gifted at plot. Her Jackson Brodie books are masterclasses in how to weave disparate stories together to the immense satisfaction of the reader (and probably the writer). This regular rebooting of Ursula’s life is a brilliant plot device, deftly handled, and it makes for a multi-layered meditation on twentieth century life, particularly World War II.

But Ursula keeps dying. (This isn’t a plot spoiler, it’s apparent from the very beginning that this is how the book will go.) It’s true that there is a strand of hope running through the book, that no matter what accident or abuse may end her life, she’s going to rise again. But the reader also has to watch a beloved character die again and again, and by half way through I was oppressed. I continued – it’s an excellent book – but felt pretty battered by the end.

Luckily my husband had the inspired idea of moving one of our large bookcases into our bedroom in a house rearrangement last week. It’s the one with most of my children’s and young adult novels and its arrival inspired me to pick up LM Montgomery’s Canadian classic, Anne of Green Gables. 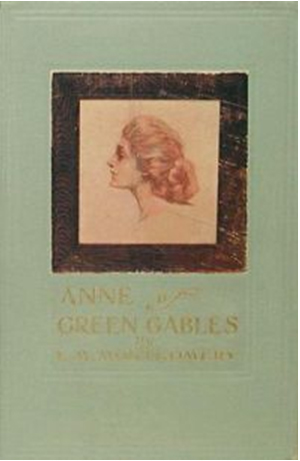 The first edition of LM Montgomery’s Anne of Green Gables, via Wikimedia Commons

What a joy Anne Shirley is! An orphan who is adopted by mistake (they wanted a boy to help on the farm) by an elderly brother and sister, Anne-with-an-E never stops talking and seldom stops ‘imagining’. She makes friends with every person (and most trees) she comes across and spreads sparkle around the Canadian village of Avonlea.

I’ve read the Anne series of books probably ten times through, maybe more. Like all good books, they change as the reader grows, and different things are standing out to me on this reading, even though I know many of the scenes by heart.

I know Anne is an enormously popular and enduring character for lots of people, so I thought perhaps I would write as I read and we could chat about reading Anne as adults. Will you join me?

None of the dozens of significant characters is perfect, but Matthew Cuthbert is universally loved by readers. It’s Matthew whose early and steadfast attachment to Anne means she can stay at Green Gables, even though she isn’t the useful boy he and Marilla sent for.

Matthew is an extreme introvert in his sixties, who avoids shops with young staff and has to be positively cajoled into sticking around when the new minister comes to tea. He and the chatty Anne turn out to be a good match, as we find out in their very first conversation, in the buggy on the way home from the station:

“…And what DOES make the roads red?”

“Well, that is one of the things to find out sometime. Isn’t it splendid to think of all the things there are to find out about? It just makes me feel glad to be alive—it’s such an interesting world. It wouldn’t be half so interesting if we knew all about everything, would it? There’d be no scope for imagination then, would there? But am I talking too much? People are always telling me I do. Would you rather I didn’t talk? If you say so I’ll stop. I can STOP when I make up my mind to it, although it’s difficult.”

Matthew, much to his own surprise, was enjoying himself. Like most quiet folks he liked talkative people when they were willing to do the talking themselves and did not expect him to keep up his end of it. But he had never expected to enjoy the society of a little girl. Women were bad enough in all conscience, but little girls were worse. He detested the way they had of sidling past him timidly, with sidewise glances, as if they expected him to gobble them up at a mouthful if they ventured to say a word. That was the Avonlea type of well-bred little girl. But this freckled witch was very different, and although he found it rather difficult for his slower intelligence to keep up with her brisk mental processes he thought that he “kind of liked her chatter.” So he said as shyly as usual:

“Oh, I’m so glad. I know you and I are going to get along together fine. It’s such a relief to talk when one wants to and not be told that children should be seen and not heard. I’ve had that said to me a million times if I have once. And people laugh at me because I use big words. But if you have big ideas you have to use big words to express them, haven’t you?”

Perhaps this time round I have a lot more awareness of the introverted life. I’m now married to an introvert and postnatal depression has made me one for the last couple of years.

I aspire to making a world where people who are so different – an introverted bachelor in his sixties and an eleven-year-old talkative orphan – can get along as well as Matthew and Anne do. I felt really sad when I read that sentence about how the well-bred girls of Avonlea normally treated Matthew. May we help our children to be more like Anne than them, eh?

I think this time round was also the first time I noticed how nice it is that it’s ok, in the world of these novels, for people to be disinclined to marry. In fact the majority of the older generation characters throughout the series are single.

The thirteen-year-old Anne chats to Matthew about courting one night:

“Did you ever go courting, Matthew?”

“Well now, no, I dunno’s I ever did,” said Matthew, who had certainly never thought of such a thing in his whole existence.

Anne reflected with her chin in her hands.

“It must be rather interesting, don’t you think, Matthew? Ruby Gillis says when she grows up she’s going to have ever so many beaus on the string and have them all crazy about her; but I think that would be too exciting. I’d rather have just one in his right mind…

“And then shall I run down the cellar and get some russets, Matthew? Wouldn’t you like some russets?”

“Well now, I dunno but what I would,” said Matthew, who never ate russets but knew Anne’s weakness for them.

Matthew is Anne’s staunch, quiet champion. He seldom ‘sticks his oar in’ – his sister Marilla made him agree that she would have sole authority to raise Anne – but when he does, he works miracles for Anne’s blossoming post-orphan life: getting permission for her to attend her first concert; buying her the first pretty dress of her life.

I have about twenty post-it notes on my copy right now, of things I want to say here, on re-reading Anne. I’ll leave today’s post devoted to Matthew and mention some other things in the next post.

But here’s the opportunity for you to rhapsodise over Anne in the comments. Have you read her as a child but not recently? Or are you a re-reader like me? What did you notice most recently, or how have you noticed your experience changing? Or what are your favourite Anne moments from the first book?

This is the first in a series on re-reading Anne. You can find the series list here.

You can keep in touch and get daily links and resources by liking the Sacraparental Facebook page (tick ‘Get Notifications’ to see whenever there’s new stuff there). I also have a bunch of niche Pinterest Boards you can check out, and sometimes hang out on Twitter.