I want to be like Anne when I grow up.

My occasional Mighty posts are about this kind of dynamic: encountering characters in literature that actually change you for the better. Laura Ingalls is one, and so far I’ve also written about Cassie Logan, Alex Archer, Jean Valjean and the Tillerman children. There are plenty more on my bookshelves and yours (who are they for you?). 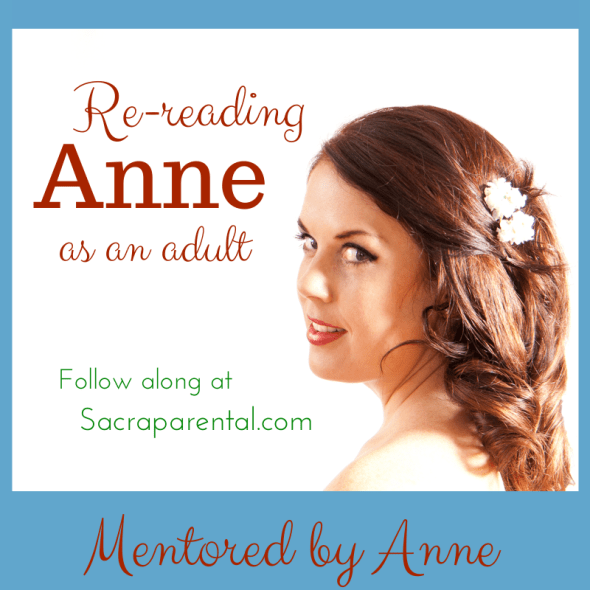 Anne Shirley is the pinnacle of this for me. For all her klutziness and dreamy absent-mindedness, she is – fairly miraculously, given her neglected childhood – a person of principle and character from the beginning of the books. She attracts friendship everywhere she goes because she is both delightful and substantial. What’s not to like?

Her sense of justice gets her into trouble with her rude neighbour Mrs Lynde and her useless teacher, Mr Phillips, and her slightly ludicrous sense of ‘honour’ gets her a broken ankle, so it’s not all saccharine moral lessons. And her vanity gets the better of her more than once (remember the ill-fated purchase from the German pedlar?). But even then, watch how she reacts to a beauty experiment gone terribly wrong:

The result was not becoming, to state the case as mildly as may be. Anne promptly turned her glass to the wall.

“I’ll never, never look at myself again until [spoiler removed],” she exclaimed passionately.

Then she suddenly righted the glass.

“Yes, I will, too. I’d do penance for being wicked that way. I’ll look at myself every time I come to my room and see how ugly I am. And I won’t try to imagine it away, either. I never thought I was vain about my hair, of all things, but now I know I was, in spite of its being red, because it was so long and thick and curly. I expect something will happen to my nose next.”

Even in her early teens, Anne is conscious of improving her character, and developing her conscience (however patchily and comically):

“…And Miss Barry took us up to the grandstand to see the horse races. Mrs Lynde wouldn’t go; she said horse racing was an abomination and, she being a church member, thought it her bounden duty to set a good example by staying away. But there were so many there I don’t believe Mrs Lynde’s absence would ever be noticed. I don’t think, though, that I ought to go very often to horse races, because they ARE awfully fascinating. Diana got so excited that she offered to bet me ten cents that the red horse would win. I didn’t believe he would, but I refused to bet, because I wanted to tell Mrs Allan all about everything, and I felt sure it wouldn’t do to tell her that. It’s always wrong to do anything you can’t tell the minister’s wife. It’s as good as an extra conscience to have a minister’s wife for your friend. And I was very glad I didn’t bet, because the red horse DID win, and I would have lost ten cents. So you see that virtue was its own reward…”

By sixteen, Anne is an adult (this next bit is a mild plot spoiler, so don’t read on if you’re new to Anne and want to read the books).

It seems hard to imagine in the 21st century Western world, where you aren’t finished your education until your twenties and many of us aren’t financially independent for even longer. But 16-year-old Anne earns both a schoolteacher’s licence and a university scholarship, and when family troubles become pressing, she makes a very adult decision to sacrifice her plans:

When Marilla had eaten her lunch Anne persuaded her to go to bed. Then Anne went herself to the east gable and sat down by her window in the darkness alone with her tears and her heaviness of heart. How sadly things had changed since she had sat there the night after coming home! Then she had been full of hope and joy and the future had looked rosy with promise. Anne felt as if she had lived years since then, but before she went to bed there was a smile on her lips and peace in her heart. She had looked her duty courageously in the face and found it a friend—as duty ever is when we meet it frankly.

The first Anne book closes with Anne at sixteen, already a credit to humanity. She brims over with imagination, enthusiasm and fun, and also has a solid core of mature character. She learns and grows more as the series continues and becomes even more inspiring and loveable. But just looking at the teenage Anne – I’m writing this having re-read only the first two books this time round – while I’m twice her age, I can say right now that I still want to be like Anne when I grow up.

So, tell us: what fictional mentors do you have? Who do you want to be like when you grow up? And which parts of Anne are on your character-formation wish-list?

This is part of a series on re-reading Anne as an adult. You can find the series list here.

You can keep in touch and get daily links and resources by liking the Sacraparental Facebook page (tick ‘Get Notifications’ to see whenever there’s new stuff there). I also have a bunch of niche Pinterest Boards you can check out, and sometimes hang out on Twitter.

7 comments on “Re-reading Anne of Green Gables: Mentored by Anne”