It was my privilege and delight last weekend to accompany one of my favourite little girls and her daddy on her very first experience of a fancy stage show: a travelling London production of Annie.

What a treat (for me as much as her)! I got to take her to the balcony and look at all the different musicians in the orchestra pit with her. We looked at the curtains, the fancy plasterwork, the sound desk and all the people (every second one a little girl). Then she compared the different seating areas and decided, happily, that we were in the best spot.

I grew up seeing Annie at the movies in the school holidays (it played each holiday season, long before the days of frequent kids’ film releases), but I’d never seen the stage show the movie is based on.

A red-headed orphan with a sparkling personality, adopted in the expectation of being a boy… sound familiar? 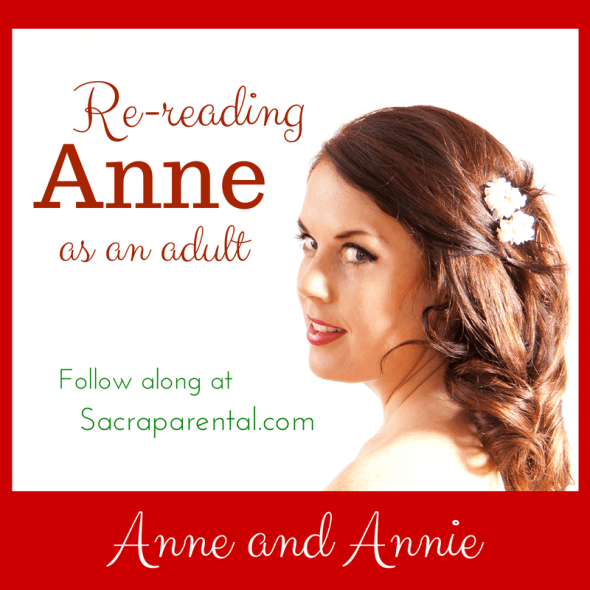 The musical is based on a 1920s comic strip, and I haven’t seen any suggestions that the cartoonist was influenced by, or even aware of LM Montgomery’s red-haired orphan, Anne-with-an-E. (This blog post compares the two and draws some connections with Canadian and American ideals, if you’re interested, and this one does a point-by-point plot and character comparison.)

Goodness me, I love the theatre. While I was enjoying Saturday’s performance, several disparate Sacraparental-ish and Anne-ish thoughts came to mind, so here you have them now.

I cried in the very first song! The orphanage girls are bickering at the opening of the show, and Annie sorts them all out with a few words when she enters. She’s a mother hen to all these abandoned children, and her own story of being left as a baby with a note promising her parents’ return gives hope to them all. As she settles everyone back to sleep, she wistfully sings about her long-lost parents:

Betcha he reads
Betcha she sews
Maybe she’s made me
A closet of clothes
Maybe they’re strict
As straight as a line…
Don’t really care
As long as they’re mine!

Well I don’t mind telling you I sobbed. No child should be miserable and abandoned. No child should be singing about lost parents while neglected and threadbare. If this were merely fiction, that’d be one thing, but I know it’s not. There are thousands of kids in New Zealand, and millions around the world, who live this wistfulness.

The momentous thing that happens to Annie soon after singing this song is that she’s whisked away for a fortnight’s holiday with billionaire Oliver Warbucks. He got his assistant to go and arrange an orphan and didn’t think much more about it. He thought all orphans were boys, but Miss Farrell picked Annie, so he got an unexpected girl-child in his life instead. 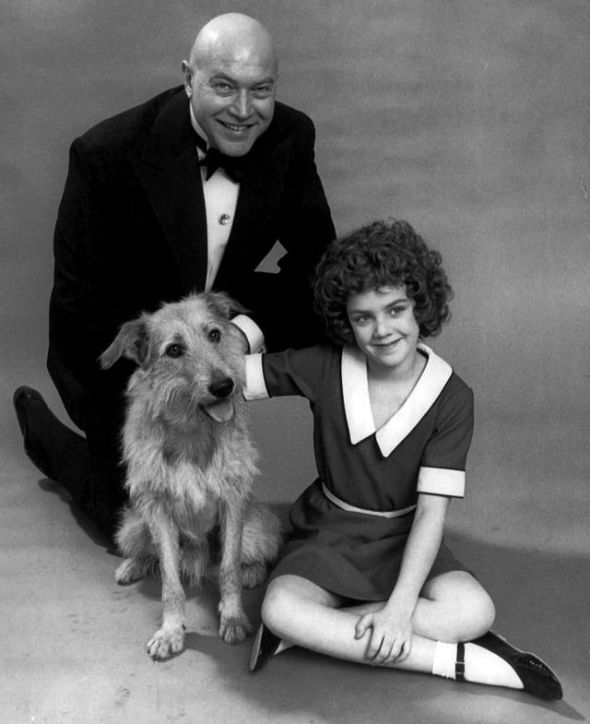 I was struck, in the scene where she arrives at his mansion, with how she is treated. Miss Farrell asks her where she’d like to start. Annie says, ‘Umm, the floors. I’ll scrub them, then I’ll get to the windows.’ The whole staff scrambles to assure Annie that she’s there to be pampered, not to be a drudge:

We hope you understand
Your wish is our command…
We know you’re gonna like it here!

Shouldn’t all orphans be treated like that? Shouldn’t the most hard-work, unlovely, neglected, broken little children be put to bed in satin sheets, finally?

If this is tugging at your heart, as it did mine, you might like to listen to the tug. Open up a new tab in your browser and search for the child protection agency in your country and how to support their work. Or have another look at this post on supporting parents in crisis.

Here are some specific links if you’re in New Zealand:

Child Youth and Family is the NZ government department that trains caregivers for kids who need care outside their families. Here’s all their info.

Open Home Foundation is a Christian agency supporting families in crisis. There are heaps of ways – big and small – to help, listed here.

In the United Kingdom, the church-based Home for Good campaign is recruiting foster carers and adoptive families for the thousands of children in need of a good home:

Through the Home for Good campaign we are seeking to find homes for 4,600 children who are currently waiting for adoption and to provide 9,000 more foster placements throughout the UK. We are in touch with 15,000 churches. If one family in each church decided to foster or adopt, we would meet the need that currently exists in the UK. Fostering and adoption is not for everyone, but everyone in the Church has a role to play in prayer, practical support and creating a welcoming environment for vulnerable children and their families.

Orphans are, of course, a trope of literature going back centuries. More than that, I was reminded watching Annie, they come up a lot in the Bible. God goes as far as saying to his people through the prophet Isaiah:

12 When you come to worship me,
who asked you to parade through my courts with all your ceremony?
13 Stop bringing me your meaningless gifts;
the incense of your offerings disgusts me!
…

15 When you lift up your hands in prayer, I will not look.
Though you offer many prayers, I will not listen,
for your hands are covered with the blood of innocent victims.
16 Wash yourselves and be clean!
Get your sins out of my sight.
Give up your evil ways.
17 Learn to do good.
Seek justice.
Help the oppressed.
Defend the cause of orphans.
Fight for the rights of widows.

James continues this theme explicitly in his letter (in the New Testament):

Pure and genuine religion in the sight of God the Father means caring for orphans and widows in their distress and refusing to let the world corrupt you.

We have no hint in Annie of Oliver Warbucks’ motivations in deciding to host an orphan, though we do see his heart melt and new life creep into him as he lets Annie in. But we do see in Marilla and Matthew Cuthbert’s decision to take in an orphan to help on the farm a foundation of compassion and duty. They intend from the beginning to provide a full education and a good home for a child.

In Anne of Avonlea, the second book in the series, Marilla goes further, and takes in the newly-orphaned six-year-old twins, Davy and Dora, who are the children of a third cousin. For a single woman in her sixties to adopt small children because they need her is no small expression of Christian conviction. She’s a good woman, that Marilla. To remind you, here’s how it came about:

“…And the long and short of it is, Anne, that I’m sure Mary wants me to take those children . . . she didn’t say so but she LOOKED it.”

“Oh!” Anne clasped her hands, all athrill with excitement. “And of course you will, Marilla, won’t you?”

“I haven’t made up my mind,” said Marilla rather tartly. “I don’t rush into things in your headlong way, Anne. Third cousinship is a pretty slim claim. And it will be a fearful responsibility to have two children of six years to look after . . . twins, at that.”

Marilla had an idea that twins were just twice as bad as single children.

“Twins are very interesting . . . at least one pair of them,” said Anne. “It’s only when there are two or three pairs that it gets monotonous. And I think it would be real nice for you to have something to amuse you when I’m away in school.”

“I don’t reckon there’d be much amusement in it . . . more worry and bother than anything else, I should say. It wouldn’t be so risky if they were even as old as you were when I took you. I wouldn’t mind Dora so much . . . she seems good and quiet. But that Davy is a limb.”

Anne was fond of children and her heart yearned over the Keith twins. The remembrance of her own neglected childhood was very vivid with her still. She knew that Marilla’s only vulnerable point was her stern devotion to what she believed to be her duty, and Anne skillfully marshalled her arguments along this line.

“If Davy is naughty it’s all the more reason why he should have good training, isn’t it, Marilla? If we don’t take them we don’t know who will, nor what kind of influences may surround them. Suppose Mrs. Keith’s next door neighbors, the Sprotts, were to take them. Mrs. Lynde says Henry Sprott is the most profane man that ever lived and you can’t believe a word his children say. Wouldn’t it be dreadful to have the twins learn anything like that? Or suppose they went to the Wiggins’. Mrs. Lynde says that Mr. Wiggins sells everything off the place that can be sold and brings his family up on skim milk. You wouldn’t like your relations to be starved, even if they were only third cousins, would you? It seems to me, Marilla, that it is our duty to take them.”

“I suppose it is,” assented Marilla gloomily. “I daresay I’ll tell Mary I’ll take them. You needn’t look so delighted, Anne. It will mean a good deal of extra work for you. I can’t sew a stitch on account of my eyes, so you’ll have to see to the making and mending of their clothes. And you don’t like sewing.”

This is part of a series on re-reading the Anne of Green Gables books as an adult. You can see the whole series list here to catch up.

You can keep in touch and get daily links and resources by liking the Sacraparental Facebook page (tick ‘Get Notifications’ to see whenever there’s new stuff there). I also have a bunch of niche Pinterest Boards you can check out, and sometimes hang out on Twitter (mostly when I’m riled up).