This is part of a series on the experience of re-reading LM Montgomery’s Anne of Green Gables books as an adult. This one focuses on book two, Anne of Avonlea, so you may want to wait till you’ve read the first book to catch up here, though it’s not really full of spoilers if you’ve read the books some time ago.

You can see all the posts in the series here.

At the ripe ages of sixteen and eighteen, Anne and her old nemesis-turned-chum Gilbert are each in sole charge of a one-room country school, teaching children from five to twenty. Teenagers clearly grew up faster then (and there).

So it’s fitting that they are capable of the following mature discussion of life ambitions. And inspiring, I reckon. 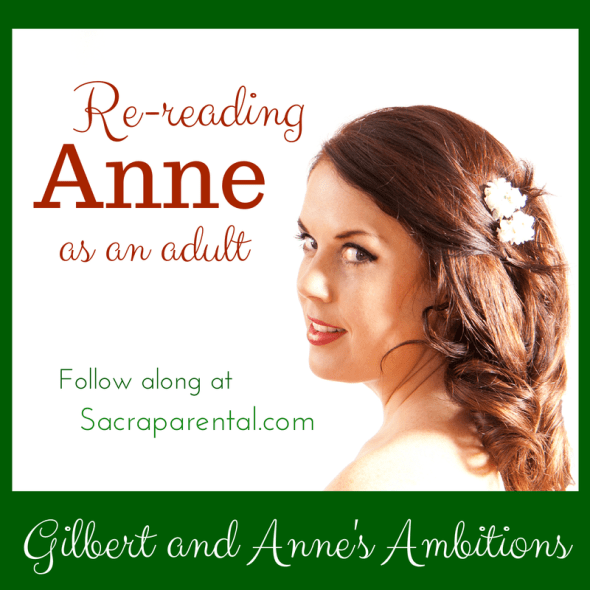 The mention of college gave a new direction to Gilbert’s thoughts, and they talked for a time of their plans and wishes . . . gravely, earnestly, hopefully, as youth loves to talk, while the future is yet an untrodden path full of wonderful possibilities.

Gilbert had finally made up his mind that he was going to be a doctor.

“It’s a splendid profession,” he said enthusiastically. “A fellow has to fight something all through life . . . didn’t somebody once define man as a fighting animal? . . . and I want to fight disease and pain and ignorance . . . which are all members one of another. I want to do my share of honest, real work in the world, Anne . . . add a little to the sum of human knowledge that all the good men have been accumulating since it began. The folks who lived before me have done so much for me that I want to show my gratitude by doing something for the folks who will live after me. It seems to me that is the only way a fellow can get square with his obligations to the race.”

“I’d like to add some beauty to life,” said Anne dreamily. “I don’t exactly want to make people KNOW more . . . though I know that IS the noblest ambition . . . but I’d love to make them have a pleasanter time because of me . . . to have some little joy or happy thought that would never have existed if I hadn’t been born.”

Steven Covey’s best-selling self-management book, The Seven Habits of Highly Effective People, may sound a bit geeky or culty but it’s well worth a look if you are interested in making your life work a bit better.

The second ‘habit’ is ‘Begin with the End in Mind’, and here’s a summary from the book’s website:

So, what do you want to be when you grow up? That question may appear a little trite, but think about it for a moment. Are you – right now – who you want to be, what you dreamed you’d be, doing what you always wanted to do? Be honest. Sometimes people find themselves achieving victories that are empty – successes that have come at the expense of things that were far more valuable to them. If your ladder is not leaning against the right wall, every step you take gets you to the wrong place faster.

Habit 2 is based on imagination – the ability to envision in your mind what you cannot at present see with your eyes. It is based on the principle that all things are created twice. There is a mental (first) creation, and a physical (second) creation. The physical creation follows the mental, just as a building follows a blueprint. If you don’t make a conscious effort to visualize who you are and what you want in life, then you empower other people and circumstances to shape you and your life by default. It’s about connecting again with your own uniqueness and then defining the personal, moral, and ethical guidelines within which you can most happily express and fulfill yourself. Begin with the End in Mind means to begin each day, task, or project with a clear vision of your desired direction and destination, and then continue by flexing your proactive muscles to make things happen.

One of the best ways to incorporate Habit 2 into your life is to develop a Personal Mission Statement. It focuses on what you want to be and do. It is your plan for success. It reaffirms who you are, puts your goals in focus, and moves your ideas into the real world. Your mission statement makes you the leader of your own life. You create your own destiny and secure the future you envision.

This is pretty much what Anne and Gilbert do as teenagers – I wonder how common that is these days?

I started this kind of focused process (prompted by belonging to a wonderful, challenging small group at church, and long before I encountered Steven Covey) when I was about eighteen, in my second year at university. That year I made some foundational decisions about who I wanted to be and how I would prioritise my life that had long-reaching consequences, and still hold. I guess that’s not so much later than the Avonlea kids – though my financial independence was some years behind theirs!

My observation, though, is that church small groups (home groups, study groups, leaders’ teams, and so on) are among the only structured settings for this kind of conversation available to most young adults. Certainly none of my non-churchy university friends had anything like this kind of prompting and weekly, intentional focus on personal development, which is a real shame, I think. Some of them read books that helped with this kind of thing. Many of them didn’t. Very few outside the church had active mentors. The main exception was those doing serious sport with dedicated, holistic coaches.

As people move into their late twenties or thirties, they’re more likely to seek mentors, therapy or some kind of life-coaching, but I never knew of anyone outside the church doing those kinds of things in their teens or early twenties – which is when most of us are at our most pliable and energetic when it comes to this kind of serious business.

I’m really interested in your experiences, and those of teenagers and young adults you know. Are there safe, helpful places for young people to be helped to consider these questions? Are kids doing it themselves without organised help? How can we support young adults to do the hard yards of character formation when they are in this golden period of growth and flexibility?

Anne and Gilbert are talking about what they want to do – something young adults are always encouraged to plan – but their conversation is inextricably tied in with the kind of person they want to be. It’s this latter question that I’m interested in.

I wonder if digital natives get this kind of life-coaching from online sources, but I don’t really know. What are your insights?

Feel free to pop over to the Sacraparental Facebook page for daily snippets. You can also follow any of my niche Pinterest Boards or see me sometimes on Twitter (if I’m particularly riled about something, usually.)