Let’s leave the testicles out of this

I loathe and detest it when people call a brave or audacious action ‘ballsy’. Courage doesn’t come from testicles. The human race would be in trouble if it did.

A professional colleague said in a meeting recently ‘don’t they say your vision is only as big as your balls?’ Lucky for all the congregations and organisations I’ve served over the last decade that I didn’t say that, or I wouldn’t have been very good at my job, which certainly included strategic, visionary leadership.

And wow, do I hate the manipulative advice to ‘man up’ or ‘grow a pair’. People who say those are usually saying ‘if you don’t do what I want you to do, you’re not really a man.’

This kind of unnecessarily gendered language is bad for men and bad for women. It puts all of us in confining boxes. Men have to be brave and women can’t be.

Gender is not connected to character. What kind of person you become, and the heroic deeds you are capable of has very little to do with your sex or gender. There are lots of kinds of ‘real men’ and ‘real women’. It’s time we disconnected these things in our language.

If you want to encourage a guy to be brave or responsible or to do the right thing, then say that. It’s hard enough to make good choices in life without having them tied, irrelevantly, to a sense of your masculinity.

Testicles make sperm. Neither their presence nor their size tells you anything about a person, except that they can probably make sperm. So when we’re talking about things that are not sperm, things like courage, vision, responsibility and good character, let’s just leave the testicles out of it, shall we? 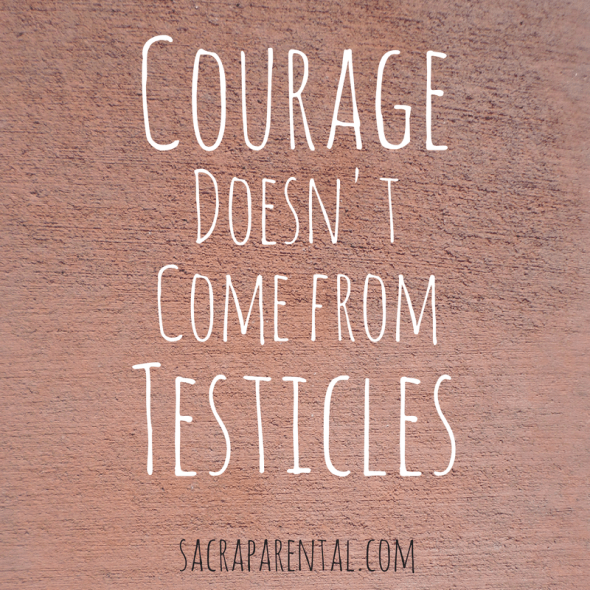 It would be almost insulting for me to try and prove the obvious fact that women can be just as brave as men. But how about you feel free to tell stories in the comments below of courage and visionary thinking that have nothing to do with gender.

And as always, please do chip in with your two cents’ worth of opinion. What do you think about all of this? What do you want children you know to hear and understand about the connection between character and gender? What do you think when you hear this kind of language? Are there other gendered phrases that get to you?

9 comments on “Let’s leave the testicles out of this”