Muka Kids: Changing the World by Changing How We Buy Children’s Clothes

A warm welcome to a special guest! 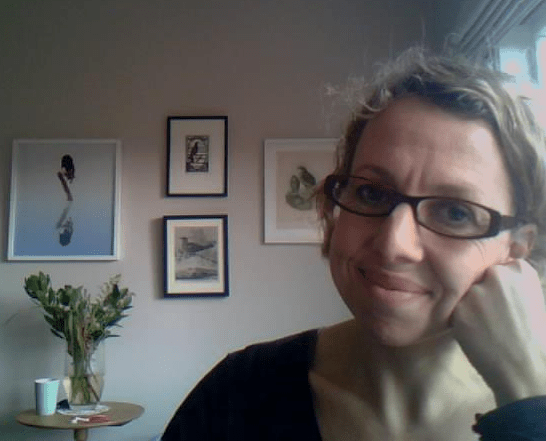 Jess Berentson-Shaw lives in on the side of a windswept Wellington hill. Jess has two kids, is a part time researcher and scientist, and runs (and blogs about) her social enterprise called muka kids. Muka kids is her plan to bring about a sustainability revolution in the world of kidss clothing production – and it’s a plan I’ve never seen in action before, so do read to the end to hear about it. She has also been known to hide under the bed from her kids during ‘the nutty hour’.

Why buy ethical clothes (fairtrade and organic) your kids?

Here are some numbers about cotton clothing production that might surprise you:

5 (the age which some kids start working on cotton crops in developing countries).

5 (the main groups of toxic chemicals commonly used and found in children’s clothing).

4.2 billion (the dollars that US cotton farmers receive in government subsidies each year. equivalent to the value of their entire crop).

75 (the percentage of the subsidised US cotton crop dumped on the international market priced at or below the cost of production in developing countries).

90 (the hours a week that some garment workers are required to work without contracts).

51 (the euros per month the average garment worker in India is paid).

195 (the euros per month calculated as needed to live basically in India).

1.5 (the tonnes of carbon emissions the average family’s annual clothing requirements are responsible for releasing).

70 (kilos of clothing waste a family produces each year).

Hmmmmm, not so great huh?

In this post I want to talk about what is important to us when we buy kids clothes, why it is totally understandable that this is the stuff we place importance on, but how this has lead to some pretty serious issues for people and the planet.

However, what I really want to emphasise is the positive story here. Yep, there are bad things happening, but don’t let this paralyse us into doing nothing. Rather, with some innovative thinking about clothing production and use, ethical buying can be both effective and accessible. How this innovative thinking and action can make a difference to real working women (women just like me) and the environment we all live in and our kids inherit, is a big part of the story I want to tell.

Throughout this post when I talk about ethical and sustainably made clothes I am referring to fair trade and organically certified cotton clothing. I have written an earlier piece about what certified fair trade cotton actually means. You can also read about organic cotton, and how you can be sure you are getting both and are not the victim of ‘greenwash’.

What is important to us when we buy kids’ clothes?

Once upon a time when I needed clothes for my kids, I looked for ‘affordable’ (read ‘cheap’, because really that is what they are) and attractive clothes. I wanted my kids to look and feel good about their clothes, but I was not prepared to spend a lot of money to do so as they just grew out of them so quickly.

When I did think vaguely about how the clothes were created, or why they were affordable/cheap it was all a bit too hard, to be honest. Buying organic (which I thought was the only sustainable/ethical option available) was pretty expensive. We were on one income off and on after having the kids, and for us organic was really not an option.

Many parents also talk about the limited choice in fair trade and organic kids clothes and often note that what is available has, what I have affectionately termed, ‘the brown rice look’: where you know it is going to be good for you because it just looks like it should. Frankly kids won’t blow their nose on these clothes let alone wear them.

So, we as consumers (I am speaking generally here with no judgmental thoughts) would like kids clothes to be cheap, look nice and last just long enough. Cotton is best. Buying ethically and organically would be nice, but it is too expensive and there is little choice available.

So what changed my priorities when buying kids’ clothes?

A few things happened to adjust my thinking. I am an enquiring sort of woman so I did a bit of information digging,, but a lot more was about going to India. I have written my story in detail on my website. 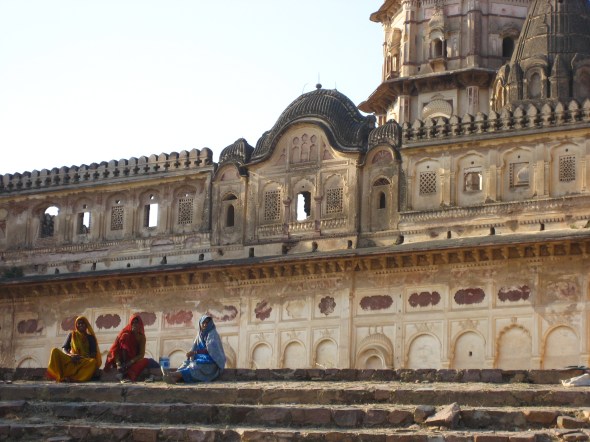 The scientist and traveller in me lifted the lid on the container that said ‘cotton clothing industry’ and a whole lot of stuff came flying out, a lot of it actually kind of slimy and foul smelling (not unlike my compost bucket at the moment, actually).

So what is the problem with kids’ clothing production (the quick version)?

Here is the very basic version of the cotton production chain: 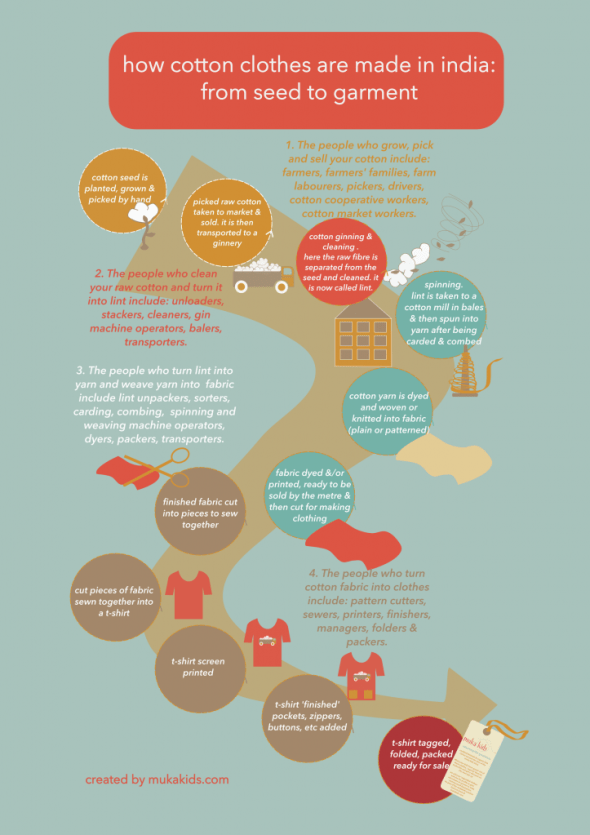 And here’s a bit more detail for those who want to know the backstory (click to enlarge): 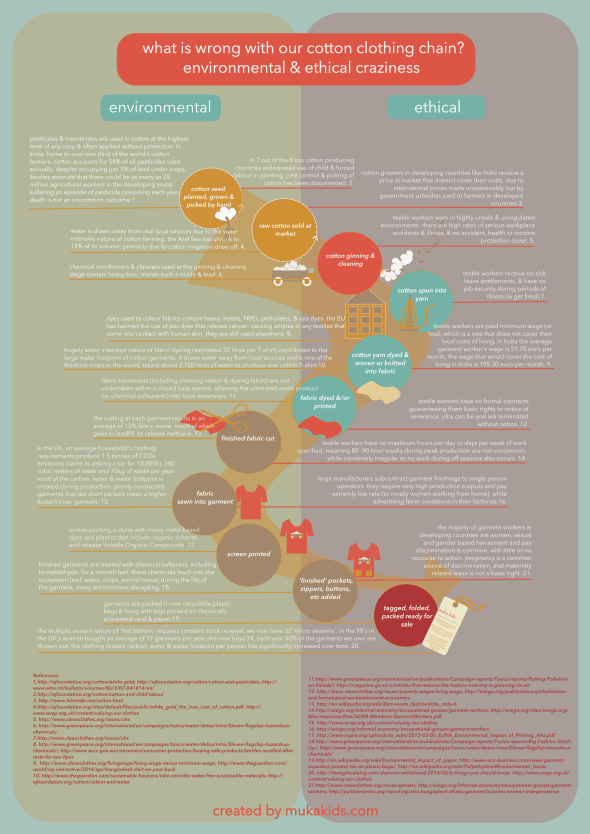 You get the idea that it is a long chain, with a lot of stages, and in each of those stages lurk quite a few nasties.

The overarching problem is this: the cotton clothing production chain operates very cheaply to give us what we want.

Some of this stuff you may already know, there has been quite a bit of coverage on the garment making industry since the collapse of Rana Plaza in Bangladesh.

So this is how standard cotton clothing production operates so cheaply in Asia and Europe (and do remember some more expensive clothing is produced in exactly the same way so it is not an issue confined to cheap clothing):

So what can be done? How does buying ethically and sustainably help?

This is not a story where I want to focus on why we should all feel bad and should be doing better. Berating people for making what seems the obvious choice never makes a lot of sense. Rather it is a story about how we can change the choices available to us, and the huge power we as consumers have to break cycles of working poverty of people, mostly women, in developing countries, and address some of the pretty significant environmental issues that clothing production creates.

So how do I change the status quo of kids’ clothing production?

Lots of people have written a lot of sensible things about how to have a more sustainable approach to clothing. Kids’ clothing is often bypassed in these conversations though.

Well, with a bit of rethinking, perhaps buying fewer, better quality, certified fair trade and organic clothes for your kids is actually more accessible to you than you think right now.

Like me you could have a count of the number of clothes your kids actually wear and those they don’t. Consider whether, if you took the money spent on those clothes they don’t wear, buying fewer ethical clothes may be a valid option.

Certified fair trade and organic cotton is better quality, and is a good way you know a garment is made of the good stuff.  There are assurances built in from third-party auditing so that many of the problems I talked about above do not happen. I won’t go so far as to say the system is perfect, but it is certainly the best right now in cotton clothing production.

Buying quality secondhand kids’ gear (where you can get it) is also a pretty good thing to do. It can be pretty challenging to get good quality second hand kids stuff these days.

Buying locally made is good too, (it will not address the issues inherent in the cotton growing and fabric making process, but does support local business and garment makers).

There are also a number of other things that can be done:

1. We can support international and government level actions to have manufacturers pay the ‘true’ cost of their production in developing countries (and indeed locally). For example the cost of ill health and death due to the work environment, cost of  missing education, cost of water use, environmental pollution and degradation and carbon output.

2. Through our purchasing power we can ask large brands to reorient their business model to a more ethical and sustainable one and adjust profit forecasts just a wee little bit. Consider how little they are currently paying at the scale at which their garments are produced.

3. We can get innovative and challenge the traditional model of how clothes are made, used and discarded.

How muka kids is trying to make things better for everyone

At muka kids we have identified that for parents there is a barrier to investing in fair trade and organic kids clothing.

There is a perception that ‘price per wear’ in such garments is very high. The more you pay the less ‘value’ is seen to be realised – kids still grow out of high quality clothes at the same rate.

However, at muka kids we figured out that if we came up with a way to get people to realise ‘value’ from that fair trade organic garment even after they have finished with it, then there would be a real financial incentive to buy certified fair trade and organic, as well as the obvious feelgood one.

At muka kids people can return their kids’ clothes (when they are too small) to us for a discount on further muka kids clothes; we call it ‘regooding’. 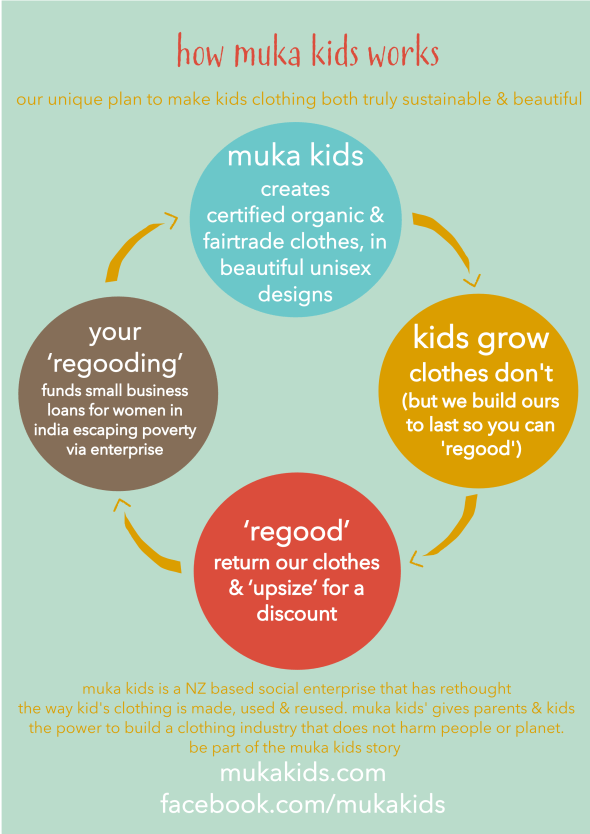 Parents and kids will not only see a benefit for themselves through slightly more accessible fair trade and organic clothes, but we resell these clothes and use the profits to make microloans to women in India working their way out of poverty through their own small enterprises. It is a virtuous circle. A win for buyers of kids’ clothes, a win for makers of kids’ clothes and a win for the environment through giving further life to each garment.

I would love to hear your thoughts about ethical and sustainable clothing for kids, your experiences of buying clothes for your kids, and even some of the innovative business models to improve the lives of workers and the environment you may have come across. What do you think about all of this?

5 comments on “Muka Kids: Changing the World by Changing How We Buy Children’s Clothes”