The Sacrament of Pregnancy

The church has long taught that there are certain special moments where God is particularly present in our world. The ritual of baptism, the sharing of a communion meal. Different church traditions have argued about how many there are, but that seems to me to be a nonsensical question. 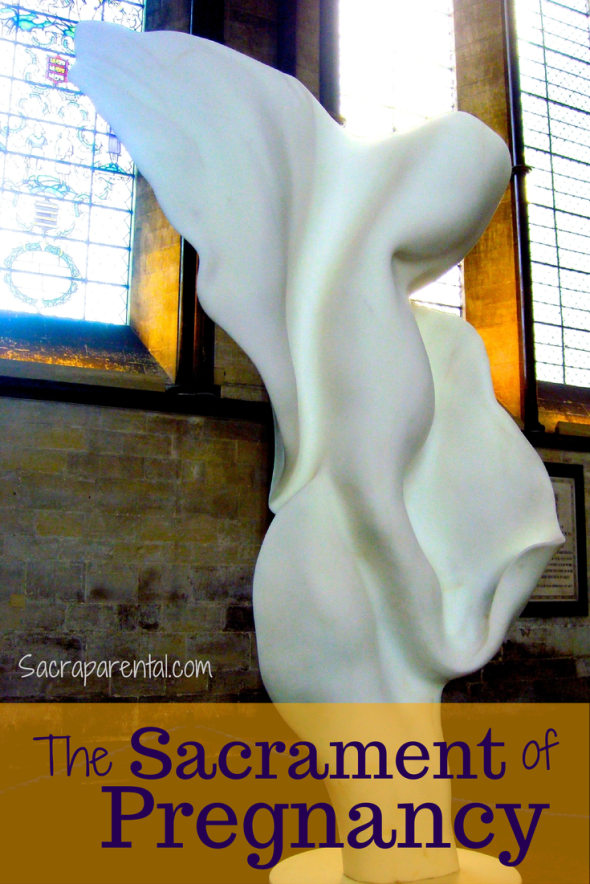 God is particularly present in an infinite number of ways, surely? And how I experience God’s presence is very likely to be alien to your experience.

So these occasional ‘Sacrament’ posts (The Sacrament of Housework, The Sacrament of Breastfeeding) are trying to draw out and acknowledge the sacredness of some experiences that didn’t make the Big Seven or Big Two that various churches get excited about.

The fact that marriage and ordination can be officially named as holy moments, but the conception and bearing of a child have not been is just one more reason we need more women doing theology and exercising leadership in the church, I say.

I feel like I don’t even need to argue this one very hard. Surely it’s clear to everyone who relates to the idea of the ‘sacred’ that participating in the creation of a new human being must inherently be a holy, sacred thing, where God can be keenly felt?

Sacraments aren’t exclusive or compulsory – not everyone gets to be married or ordained, and baptism and the eucharist are open to everyone, but optional.

Conception and pregnancy are of course two things that not everyone is lucky enough to experience. Saying that they are sacraments is not at all to suggest that lucky = blessed. I did nothing whatsoever to deserve either my baptism or my pregnancy.

I wonder, though, if it is possible to experience someone else’s pregnancy as a sacrament. What do you think? And the inverse? I wouldn’t presume to say this for anyone else, but it may be for some people that longing to be pregnant is also a time where God can be close.

If I were to embark on a bit of a series on The Sacrament of Pregnancy, what would you like to see in it?

The sculpture in the title image is Il Vento (2006), Helaine Blumenfeld, photographed in Salisbury Cathedral when I visited in 2013.

4 comments on “The Sacrament of Pregnancy”