I love the days when my 2.5 year old son gets mistaken for a girl (Yus! No arbitrary gendered fashion advice for us, thanks!), when he plays with a tea-set, or when he says his favourite colour is pink (just the once, and I’ve seen no actual evidence of this, but it’s nice he didn’t know it would be weird for some hearers). 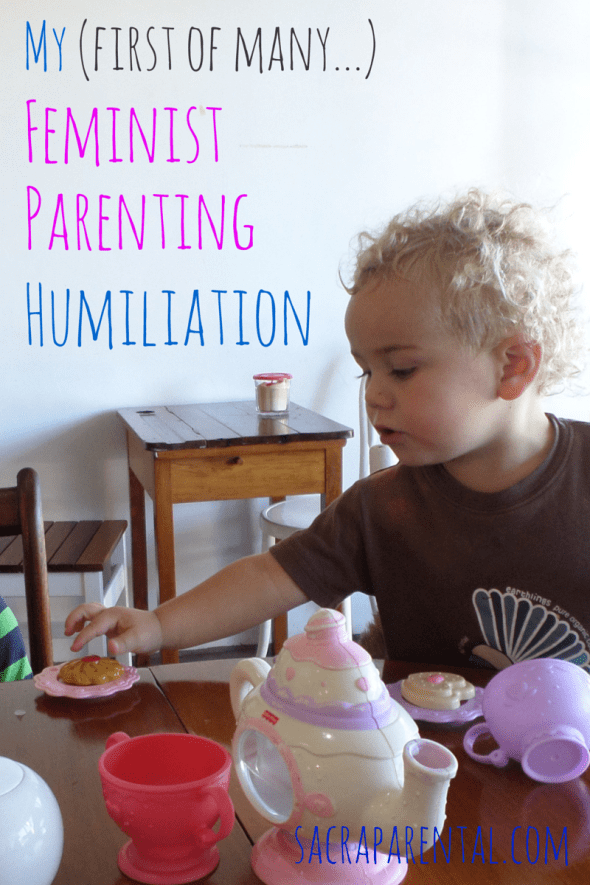 My husband I were going to a doctors’ appointment and the plan was for SBJ to stay home with his grandparents. Sadly we all overslept and in the ensuing flurry he got pretty upset about the idea of not coming with us. Fair enough, ten minutes after waking, we thought, so we bundled him along for the ride.

It was quite a long appointment and he did really well at letting us get on with it, thanks to a box of toys in the corner of the room. About half way through, the doctor left to get something. She came back in, started taking my blood pressure, and my Son of Feminist Parents started this conversation:

[Incredulous pause, filled with a sense of foreboding] ‘She’s right here, love. This is the doctor.’

[Another pause where I dreaded what might come next] ‘But doctors are usually mans.’

[Tearing myself away from correcting the grammar and heading straight for the outrageous content] ‘Actually, honey, doctors can be men or women. Lots of doctors are women.’

At this point, I kid you not, my blood pressure reading came back as a little too high and the doctor was a mite concerned. After a bit of embarrassed laughter and defensive conversation with her (defensive on my part – she said she’d heard it all before) it was back to normal.

So let me get my defence in now, and ask you for some help figuring out what on earth has been going on in my little boy’s head. (More later about the conversations he and I had after that!)

My son’s GP in New Zealand is a woman. He’s never been seen by a male doctor. He hasn’t watched much television until recently (go Ceebeebies!), with a major exception for Postman Pat on YouTube, where the doctor character is a woman.

His English godmother is a doctor, as are several other of our friends, who he actually addresses often as ‘Doctor Esther’ or ‘Doctor Sarah.’ So where on earth did he get the idea that doctors are usually men? They clearly aren’t, even in his own personal experience!

The only real-life counter to this – and it’s a biggie – is that the doctor he knows best of all is his father. I guess that counts for more than some of the other examples in his life, especially as he’s only rarely been to his GP. But still!

We’re reaching the age and stage where ‘outside influence’ starts to become stronger in SBJ’s life, and I confess I am finding that hard going sometimes. At kindy they have different actions to ‘Wind the Bobbin Up’ than we do at home. There’s a ‘Wheels on the Bus’ video clip he likes watching that has different words from our home version. Even those little things bug me a bit, but mostly because they I can see they’re just harbingers of more to come. Like ‘doctors are usually mans.’

The good thing about this, of course, is that we got to have a couple of good conversations about who can be a doctor, and which doctors he knows. He hasn’t been able to tell me how he got the idea – there’s no obvious source, like kindy or a friend or tv programme as far as I can tell – so that remains a mystery. But I do believe that this kind of reflecting together is the key to raising kids to be discerning about what they take on board from the surrounding culture.

Watching sexist tv programmes when I was a kid (seriously, Smurfette is the only female Smurf?) and critiquing them in conversation was a big part of my early feminist consciousness, so I can see it’s often better to allow exposure to stupid nonsense than to ban it, as long as exposure goes along with conversation.

It just would have been nice for my feminist parenting ego if he had come out with this little gem at home, rather than in the doctor’s own consulting room!

I have a couple of questions about all this that I’d love you to chat about in the comments below.

How do you think (apart from my own parenting failures!) SBJ, at his age, got this idea? It’s all speculation, of course, especially for those of you who don’t know him personally, so  I mean it theoretically. Do you think, even given the number of female doctors he knows, that a sexist culture just leaks through to children’s consciousness? Sure, I suspect the fact that his own dad is a doctor is probably a big contributor, but I can imagine other kids of feminists coming out with similar stuff pretty easily.

What are your thoughts and experiences on critiquing sexism (and other harmful social influences) with kids you know? I’d love to hear some stories, please!

And if you have a Feminist Parenting Humiliation of your own to share, please feel free to make me feel better by popping it in the comments :).

11 comments on “My Feminist Parenting Humiliation”