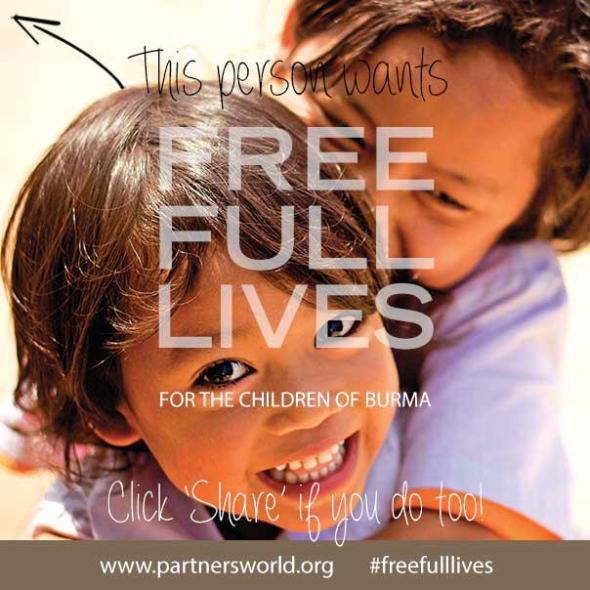 The last fortnight has been a mix of hope and horror as I’ve been learning more about the work of the friends we’re visiting in Thailand.

They are part of Partners Relief & Development, a small international charity that does strategic work in health, education, poverty uplift and human rights advocacy for the (very many) oppressed people of Burma. Partners is based in Thailand, where huge numbers of refugees and migrants come, but it works in both countries.

Like many of you, I’ve had Burma (or Myanmar – what do we even call it?) on the radar for a while, in a hazy way. It’s been in the same category as Taliban-ruled Afghanistan was for me – a hopeless situation of horrific oppression and hardship that I felt entirely powerless to do a single thing about.

It’s a country run for decades by a military dictatorship, famous for keeping democracy campaigner and later elected representative Aung Sang Suu Kyi under house arrest for years. Her sons even had to accept her Nobel Peace Prize for her.

The regime recently held elections and is making baby steps towards democracy. But when Aung Sang Suu Kyi was asked where it was on a scale of one to ten, ten being full, free democracy, she famously answered, ‘On the way to one.’

Until I started keeping up with the work of Partners, I didn’t realise the ethnic complexities of the country. The well-armed majority are active oppressors of the many ethnic minorities, some of whom are engaged in armed struggle against the central government. The Rohingya people group have even been made stateless – with no access to health or education services for citizens, no freedom to travel or even have more than two children.

All of this, of course, leads to appalling hardship. Government healthcare and education don’t reach large numbers, and things spiral down, or stay down, from there. In the oppressed areas, one in five children die before their fifth birthday – as bad as anywhere on earth. The lifetime risk of dying in childbirth is one in 27. I’m pregnant at the moment, so that’s a particularly sobering number.

The Partners mission tagline is ‘Free, full lives for children affected by conflict and oppression.’ Here’s the story of one of these children:

And here is a story of life among the Aen people, featured on the Partners blog this week. I was privileged to hear the story in person from the staff members who met this family last just last week:

A little further up the hill I met a man named Lung Sai and his wife, Ado. They are from a little known tribe in Burma called the Aen people. As we walked in Ado, the wife, was smashing a light bulb and using one of the sharp shards to stab into her ankle causing a trickle of blood as she tried to cure her arthritis by blood letting. Lung Sai’s wife had borne 13 children over the years. Today only two were still alive. These two had given them some grandchildren. 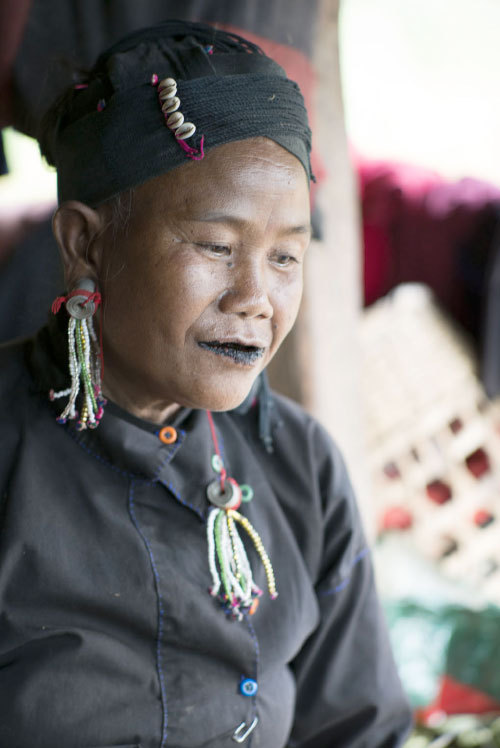 While the parents were at work in the rice fields, Lung Sai and Ado watched the grandchildren. They had no clothes and played with the pigs underneath the house drawing lines in the mud. Other kids came to see us as we talked with the family. Some of them said that I must be a monkey from the forest with my hairy arms. Every weak child had a swollen neck and cheeks as they suffered from mumps, a clear indication that no vaccination program was available to them. Not one of these children went to school. Some of the older 13 and 14 year old girls carried baby siblings on their backs. Probably preparation…since I was told they would be married in a couple of years. 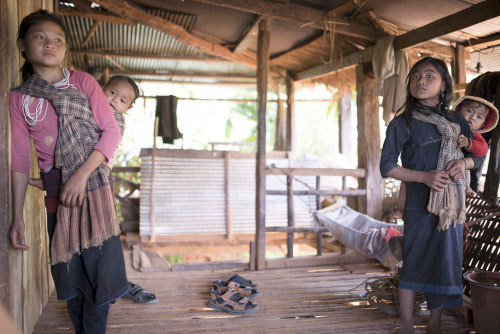 It was one of the most miserable situations that I have yet seen.

We asked if they would like to have their grandchildren schooled. Their answer was telling…“What good would that do us?” Lung Sai said. All that matters is that we have enough to eat. I asked him “What makes you happy in this life?” His answer: “When we have enough to eat, I am happy.”

This family, this community, was simply so desperate that even having their children schooled was not a consideration.

I asked our friend “Is this typical”, his answer “Yes, there are many, many villages like this.”

For us and our department, I was left asking the question “Where on earth do we start in bringing “Free Full Lives” for these children when they are smack in the middle of the “Stone Age” at the beginning of the 21st century.

And so, we have begun to think through how we can tackle this enormous problem. I must admit, the weight feels heavy.

The good news is that tackling this kind of enormous problem is what Partners is great at.

Twenty years ago, a young couple gave $30 to a support a little girl, and were then inspired to set up something bigger. Yesterday I read that Partners now works with others in Karen State to support 9,000 local teachers, who teach 127,000 children. And that’s just one of their projects.

They have a wonderful project called Shan Sustainable Schools, where remote villages are funded and supported to begin community businesses – corn farming, cattle trading, maybe even selling motorcycle parts – whose profits go entirely to paying teachers and getting kids to school. In some parts of Shan state, around 4% of kids go to school. Here’s what the response to the Sustainable Schools initiative has been like:

FROM A SHAN WORKER INSIDE SHAN STATE

“I find different people in the village and other village. I sat together with them and talked to them about the project that offering by Partners for community schools can make income. Most of them are farmers, between the ages of 35-60 years old, both men and woman. I got the same answer. All of them said that they never thought young people could have a good idea and could lead the community in education for the new generation.

Since we were born we have never seen people give to us, only take from us. We also do not trust other people to give us help in what we need. We like the idea that helps the school and the children in the local area because the local people in the high-risk area are facing the war generation after generation. We do not have many educated people because we don’t have schools.

We are very happy and thankful. We will be participating in doing the sustainable project in order to help every child’s future. We also will encourage our child to go to school every day. We don’t want to see our children face the problem that we have been facing without an answer and a solution for the issue.”

[Read more at the Partners blog.]

The main reason we’re here visiting Thailand and Partners is for my husband to be involved in some medical training they run, training community health workers and medics in Shan State to go back to their villages and help their people. Community health projects have had some amazing successes in reducing rates of malaria, anaemia, diarrhoea, and pneumonia. 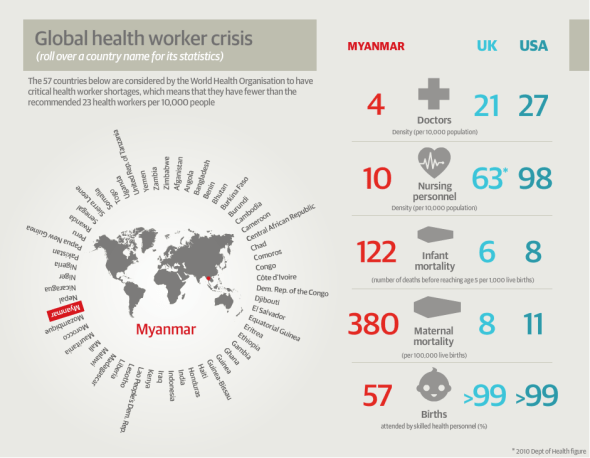 Burma spends around 1-4% of its GDP on healthcare, and 21% on its army, despite having no external enemies.

Back in 2009, Partners agreed with the Shan leadership to design and maintain a training programme to enable a basic level of healthcare to be established in rural communities. This in turn would be the development of a health system for the whole state.

Since 2009 we have trained 227 Community Health Workers, 34 Basic Medics and 4 Advanced Medics.

Heio Hom is one of our students. She is 20 years old and the eldest in her family. Her parents are poor farmers so couldn’t afford for her to be educated beyond 10th grade. She undertook a 27 day journey on foot to reach the Medic training. During this time she had been scared as the Burma Army soldiers were never far away.

Once her training is complete, Heio Hom’s dream is to return to her home village to help start a clinic there. This hope is not without fear however. She is very aware of the dangers for medics in the conflict areas of Shan State.

The last two women who tried to set up a clinic in the same area disappeared and the clinic was burned down.

But Heio Hom is not deterred from her goal by these fears. She knows if she studies hard enough she has the opportunity to bring much needed healthcare to many.

The provision of skilled health workers into Shan State is a vital part of the process towards a functioning health system, which in turn will create healthier families and bring a better quality of life to the children of Burma.

[Read more on the Partners blog.]

One of these medic trainees also babysat our boy on Wednesday night – multi-talented!

No doubt I’ll be talking more about Burma and Partners in the future. I’m incredibly impressed by both the dire need and the thoughtful, skilled response.

Here’s just one of the good news stories of what Partners is doing in Burma:

You can follow Partners on Facebook (they have a really good, useful page and feed) and get a feeling for the breadth of what they do on their excellent blog. And of course, if you have some money you designate for charitable giving, I’d warmly recommend the work of Partners to get a lot of bang for your philanthropic buck. Maybe you’d be interested in buying some Christmas presents or t-shirts to bring freedom and fullness to the children of Burma?

One of the reasons I think this stuff belongs on a blog like Sacraparental is that most of us live in the West, in reasonable comfort, and most of us here, I think, are aware of, and disturbed by situations like these ones in Burma. But it’s so hard to feel able to do anything about it, or to know where to start.

Having seen the work of Partners on the ground – I even spent yesterday afternoon reading dozens of project reports – I feel able to commend them to you as an organisation you can partner with to make a genuine, long-term, strategic difference to suffering children. We need not feel powerless. 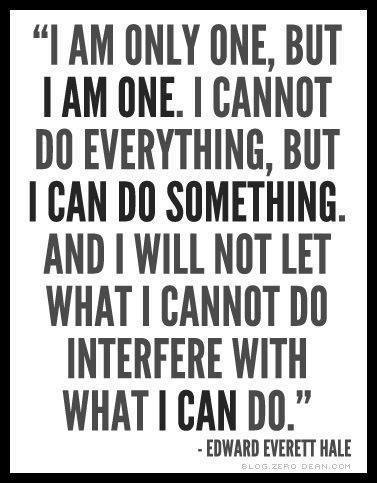