Jamie Oliver and I Are Not on the Same Parenting Page

It seems that Jamie Oliver – cheeky television chef with the ‘beestung lips’ and the Essex accent – and I aren’t on the same page when it comes to our attitude to children. 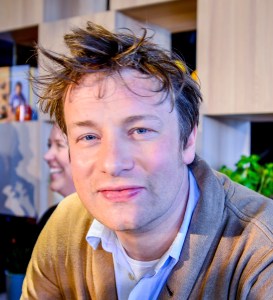 To put the differences between us starkly and bluntly, I’m not into assault, or punishment, or treating children as lesser humans.

I spoke about him with admiration in one of my very favourite sermons. He’s used his fame to do an enormous amount of good in reforming the sad eating habits of many schoolkids, in Britain and the States. He’s set up training restaurants to give unemployed young people a career. He’s tackling Western obesity and poor diet from a bunch of different, strategic angles, including political lobbying, and teaching food skills to the masses, and he focuses his enormous energy to really make social and cultural changes.

According to an interview he did recently, he also thinks it’s hilarious to punish a child by sneaking an ultra-hot chilli into their food. That’s where we part company.

I’m not trying to blow this out of proportion, or call Child Services on him. It’s just that I made the mistake of reading the comments on some posts about this incident (note to self – yet again: NEVER READ THE COMMENTS!) and I was surprised at how many people thought this was an example of awesome parenting.

So this isn’t really about Jamie, I’m just using him as a case study in common attitudes to children and parenting. Here are three reasons I think this is not a good way to go with our kids.

Jamie apparently reckons that a famous person can’t be seen to beat their kids (I’m assuming he’s being facetious and he doesn’t want to beat them anyway), so punishment-by-chilli is a clever alternative.

Actually, I think they’re the same thing, philosophically and, well, legally – at least in countries where parents aren’t allowed to beat their children.

He was aiming to cause physical pain to a child, using a chilli to apply force to another person against her will.

That’s ‘corporal punishment’ or as the criminal law usually calls it, ‘assault’.

Criminal assault is any unwanted, unconsented physical contact or threat of it. In the New Zealand Crimes Act 1961 it’s defined like this in section 2:

Common assault carries a maximum prison sentence of a year; if it’s against a child, it’s two years.

If a physical attack via a chilli-laced apple is too indirect to fit that section, there are others on poisoning or ill-treating a child that would apply. So there’s no doubt that what Jamie did would have been illegal in New Zealand – and in many other countries too.

In New Zealand there used to be an exception in the Crimes Act that meant parents could use ‘reasonable force’ to correct their children’s behaviour. That section was removed several years ago after long campaigning by Green MP Sue Bradford.

You can still grab your child to pull her out of traffic, or touch her without permission to change her nappy, but you’ll have to rely on a section 59 of the Act to defend an assault charge, because under New Zealand law, children have all the rights to physical safety and autonomy that adults have. 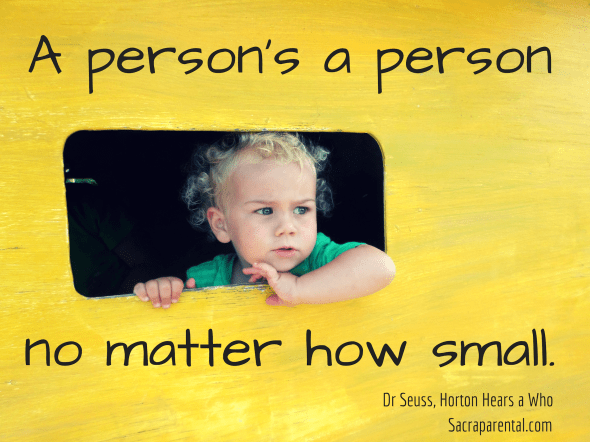 What kind of effect on his daughter’s behaviour did Jamie think this strategy would have?

It wasn’t an immediate response, aiming to form a psychological association (like the theory of slapping a toddler’s hand when they reach for the fire) – he said he waited a while and did it when she thought he’d forgotten her rude behaviour.

She’s an older child, so he must be relying (consciously or otherwise) on rational thought: When I did x, Dad hurt my mouth. I shall therefore not do x again.

And this is another step where Jamie and I are not on the same page. Because it seems to me that if his daughter changes her behaviour, it’s now only because of fear of pain.

Surely, surely, we’re trying, as parents, to help kids learn to make good decisions for themselves – because they are good decisions – not because we’re standing over them with a raised hand or a chilli-smeared apple.

For one thing, we’re just not going to have that kind of power over them forever, right? So it’s short-term thinking to choose physical punishment over serious conversation and mentoring to try and influence a kid’s behaviour. I can’t wrap my head around any good reason to go for the punishment option.

If you’d like to read up on some helpful alternatives to punishment (physical or otherwise) as a way of guiding children, here are two great places to start:

LR Knost is wonderful at this stuff. Here’s a collection of 12 common parenting situations and how to approach them without punishment.

Laura Markham is a psychologist who writes at Aha! Parenting. Here are 10 ways to guide children without punishment.

But to be clear, the fact that I don’t see ‘punishment’ as a useful parenting approach isn’t my main objection at all.

Jamie’s daughter is a human being, and all human beings have the right to be safe and secure and not have their bodies hurt by anyone.

More than that, she’s vulnerable and in a position of less power than her dad. How awful to feel like even the food you eat isn’t safe because there’s someone bigger than you that can make it hurt you.

This kind of sneaky, bullying behaviour has no place in a family.

I’m not pretending to know more about Jamie Oliver’s parenting than this interview reveals. He says his wife was outraged, and he clearly didn’t realise that some people would think his behaviour to be seriously damaging. I’m sure he loves his kids a lot. And there may be families of pranksters where this kind of trick would communicate something less harmful and disrespectful than my interpretation.

So this isn’t an attack on him, but on the culture many of us have grown up in that says might is right: if you’re bigger, you can force your way on the littler ones.

Until we start from a different point – children are people – we’ll keep reverting to historical, ineffective attitudes and methods of parenting.

I really love Lucy’s work on this stuff: treating children as human beings with rights, reacting against what is sometimes called ‘adultism’ (or ‘ageism’ or ‘childism’):

There are many more ways we oppress children because of their age- I could go on and on; they are tripping out of my typing fingers because I know them too well. I am guilty of at least a couple of these every single day.

And all of these examples, if we were to change “child” to “woman” or “disabled person” would be completely and utterly OUTRAGEOUS. But we feel free to treat children this way simply because they are young and often don’t have the words to protest. (Or they do protest and we call it a tantrum.)

Adultism, as defined by Dr Checkoway is “…all of the behaviors and attitudes that flow from the assumption that adults are better than young people, and are entitled to act upon young people in many ways without their agreement.”

I believe that awareness is the first, crucial step towards change. It was reading Parenting for Social Change by Teresa Brett and Escape from Childhood by John Holt that opened my eyes to the way I was allowing a corrupt power relationship to perpetuate injustice in my own home. Despite being utterly committed to a fair world, free from any “isms” I was allowing this massive “ism” to happen under my own roof.

(If this makes you a bit nervous or sceptical, do check out Lucy’s subsequent post describing how this actually works in her family with littlies.) When we see our kids as human beings who have the right to say what happens to their bodies, different paths open up in front of us.

If we treat our kids the same we we treat our adult friends and colleagues, we are empowered to find the patience to communicate with them like real people and help shape their character and behaviour through conversation and experience and mentoring and love and good leadership, rather than through fear of punishment – physical or otherwise.

Jamie Oliver has a great deal of influential leadership talent and charisma. I bet he can put it to use at home to help those girls become wonderful women. Without the chillis.