Is it just me, or is Advent all over the internet this year in a way it hasn’t been in the past?

If online resources nourish your spirituality, there are plenty of them out there. Here are some of the best things I’ve found over the last week or so. Let me know if any of them hits the spot for you, eh? Watch for the Light

Watch for the Light has some of the best Advent writing on the internet, for my money. This week, among other things, she’s looking at a TS Eliot poem in the voice of one of the Magi. The poem and her analysis are both profound:

Creation and destruction are the same bloody coin in this kingdom. Transformation is another word for death here, even if it’s the everyday kind of death that we learn (reluctantly, eventually, with much complaining and the provoking work of the Spirit) to want. And it’s with this new life here amid the crowding of angels and the heavy wet smell of cows that our dying begins, because this was where his began. So here is where our rebirth begins too, even before the rattle of silver and the six hands throwing dice, the God-man wet and bloody and crying in the afternoon.

[Read more at Watch for the Light.]

I’ve got a guest post up at the Seattle-based site Godspace, part of an Advent series called Come to the Manger.

Right now I’m enormously pregnant, due around Christmas, so I am inevitably identifying with Mary’s experience – or rather, hardly identifying with it at all, since I have an obstetrician, a home, whanau support and don’t plan on tramping for days to Bethlehem or anywhere else anytime soon. Mary had none of these:

‘South Sudan has the highest maternal mortality rate in the world – 2,054 per 100,000 live births. This is an astronomical figure representing a 1 in 7 chance of a woman dying during her lifetime from pregnancy related causes. Currently, there is only one qualified midwife per 30,000 people.’

First century Palestine was probably not so different from modern South Sudan in this respect. There would probably have been more midwives, but about the same level of modern medical resources like antibiotics, testing for dangerous blood pressure or gestational diabetes, and ultrasound scans.

In moments of logical thinking, Mary may have felt confident that her baby would survive – given his parentage and place in history – but no such assurance was given for her part in the story. Mary must have known of a great many women in her community who had died in childbirth or soon after.

[Read more about pregnancy, hospitality and how we can change the world at Godspace.]

An Auckland mother with depression has bravely spoken in her church about joy at Advent, and published the manuscript on her blog:

When Tim sent me the list of topics I could choose to speak about I chose Joy. Some that know me well will recognise the irony in this. It is something that seems to be a struggle for me. I have struggled with depression most of my adult life and severely since having children. For me, life can feel like being in a t.v show. I follow the script and laugh at all the right times, but inside I am not experiencing it. Inside I am tortured by feelings of self-doubt, perfectionism and self loathing. I feel overwhelmed by all that needs doing and feel stretched too thin. Not very joyful really. And as a Christian, something I have wrestled with a great deal. How can I be so sad when I apparently have such hope? How can I struggle to love myself while knowing how much Jesus loves me? How can having children, something I have longed for and hoped for – also bring such pain and struggle?

Poet and musician Malcolm Guite (featured in one of my Lent posts this year, too) is writing new sonnets to accompany ancient songs, the ‘O Antiphons’. You can read the texts, listen to the music and hear him read his poetry at his site:

O Wisdom, coming forth from the mouth of the
Most High,
reaching from one end to the other mightily,
and sweetly ordering all things:
Come and teach us the way of prudence.

[Read and hear more, including his sonnet in response to this ancient song, at Malcolm Guite’s site.]

You can connect with the Occupy Advent project via Facebook, Twitter, and other social media. Using the #adventus tag this year, they’re collecting and curating artworks and social media based reflections on Advent, like this: 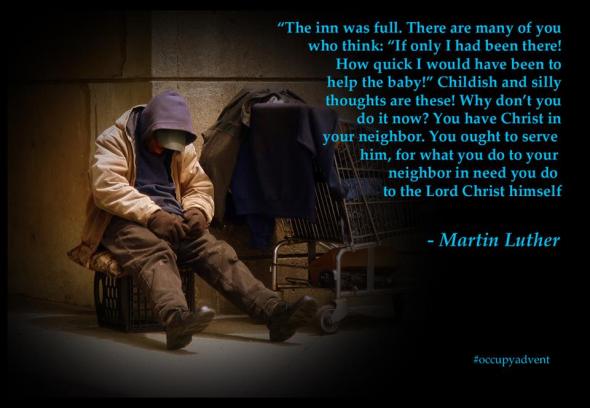 Graphic from Occupy Advent, with quotation from Martin Luther.

My main contribution this year that’s aimed at adults – though also appropriate for kids – is following Mark Pierson’s Advent in Art reflections.

You can see the first post, on a painting of the Annunciation by He Qi, here, and the second, based on this surprising He Qi painting of Mary and Elizabeth, here. The third comes out on Sunday morning. 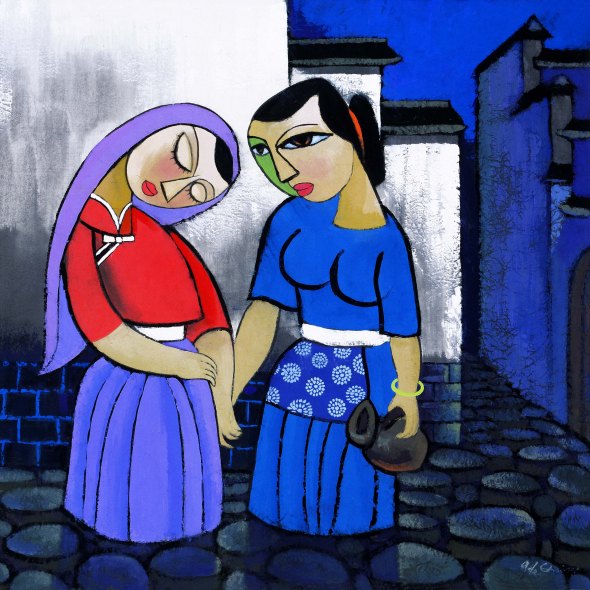 The Visitation, He Qi, used with kind permission. See more at www.heqiart.com.

More next week – unless I’ve had a baby!

I’ve got a few links up my sleeve, but am keen to hear your faves if you have stumbled across something helpful. Please leave a comment with your links and recommendations.

Please feel free to keep in touch with Sacraparental throughout Advent by following Sacraparental on Facebook (daily extras), signing up for email updates (the box at the top right) and/or following me on Pinterest (the Advent board will be particularly relevant just now!).

And please leave your ideas, recommendations and links in the comments below. Or just say hi :).