Advent in Art with He Qi: Nativity

A warm welcome to this year’s Advent in Art series, where we join thousands of others in contemplating artistic works while we wait, wait, wait for Christmas. 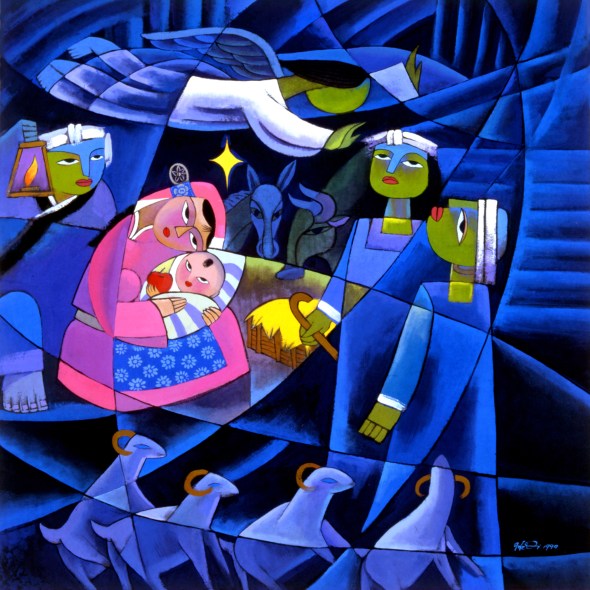 Jesus is born in one sentence in the middle of Luke’s account of that night:

2 1-5 About that time Caesar Augustus ordered a census to be taken throughout the Empire. This was the first census when Quirinius was governor of Syria. Everyone had to travel to his own ancestral hometown to be accounted for. So Joseph went from the Galilean town of Nazareth up to Bethlehem in Judah, David’s town, for the census. As a descendant of David, he had to go there. He went with Mary, his fiancée, who was pregnant.

6-7 While they were there, the time came for her to give birth. She gave birth to a son, her firstborn. She wrapped him in a blanket and laid him in a manger, because there was no room in the hostel.

In He Qi’s painting fractured painting of the night, the baby is central, surrounded by and separated from a cast of other characters. Mary is cuddling her baby, but half in, half out of the central frame. Joseph is further out, holding a light, and watching, watching.

The manger, the shepherds, the star, an angel, the resident and visiting animals are all swirled around Jesus, spanning different sections and bringing different perspectives.

All the bodies are turned towards Jesus but not all the faces. Who is watching what?

Everyone here is an outsider – had you noticed? Mary is an unmarried mother, Jesus a child born in irregular circumstances. Joseph has probably lost friends over his decision to stand by them, and they’re reduced to staying alone in a stable despite this being Joseph’s home village – where are his family in all of this?

[Update: here’s a reading of the text from New Testament scholar Phil Church that says they were probably staying with family – check it out.]

Shepherds were considered low-class people, but an angel has let them in on the secret of tonight’s special event.

I’m glad Mary is sitting, and cuddling Jesus, rather than kneeling in worship, as in so many traditional depictions of this scene. For heaven’s sake, she’s just given birth without any skilled birth attendant – I’m assuming Joseph brought not much more than emotional support to the navigation of three stages of labour.

The birth must have been relatively uncomplicated – because she and Jesus are alive, despite (perhaps) having no midwife present (let alone antibiotics, forceps, ultrasound scanners or pain relief). But even a straightforward birth leaves a woman feeling like she’s run a marathon while passing a kidney stone.

And yeah, poor Joseph! It’s hard enough to watch someone you love in labour pain, for who knows how many hours, let alone to struggle with an overwhelming sense of your own incompetence in providing any skilled help in what can be an extremely dangerous process.

As I wrote this week for Godspace, according to the United Nations Development Programme:

South Sudan has the highest maternal mortality rate in the world – 2,054 per 100,000 live births. This is an astronomical figure representing a 1 in 7 chance of a woman dying during her lifetime from pregnancy related causes. Currently, there is only one qualified midwife per 30,000 people.

First century Palestine was probably not so different from modern South Sudan in this respect. There would probably have been more midwives, but about the same level of modern medical resources like antibiotics, testing for dangerous blood pressure or gestational diabetes, and ultrasound scans.

So spare a thought, this Advent and Christmas, for those in 2014 who can relate to this painting and its story.

For the mothers in, say, rural Burma and South Sudan, for whom childbirth can be dangerous and lonely.

For the men and women around the world who are made to feel ashamed rather than blessed when a new baby is on the way.

For the underpaid, underappreciated workers in necessary but unglamorous jobs.

For the refugee and the homeless.

For people like Joseph, whose strong sense of family responsibility is battered by the disempowerment brought by war or disaster.

And for the babies born into difficult circumstances, in your street and across the world.

130 kilometres on dirt tracks winding through hills and across plains would probably have taken Joseph and a heavily pregnant Mary four of five days to walk.

A decade ago it would have taken less than three hours to drive.

Today the journey could not be made at all. The road through this conflicted and disputed zone is transacted by heavily armed checkpoints and an eight metre high wall.

In the West we take freedom of movement as something we are entitled to. Imagine how your life would be if you needed to queue with your passport every time you wanted to get out of your street or how you would feel if you knew someone from the next suburb might be tunnelling beneath your house with the intention of violent robbery.

Each time you light your three candles pray for long term peace to come to the people of Jerusalem and Gaza (and other conflict zones). Pray for protection and healing for more than 350,000 Jewish and Palestinian children severely psychologically traumatised by loss and the sights and sounds of war. For them the wait for peace has been unbearable.

Note that some traditions use a pink/rose candle and give this week the title ‘Gaudete (rejoice) Sunday’. This comes from the first word in the Latin of Philippinas 4:4-5: ‘Gaudete in Domino semper’ (‘Rejoice in the Lord always’).

How do you resolve the tension between this theme and the lives of refugees and internally displaced people?

3 comments on “Advent in Art with He Qi: Nativity”