Advent in Art with He Qi: The Magi

A warm welcome to this year’s Advent in Art series, where we join thousands of others in contemplating artistic works while we wait, wait, wait for Christmas.

Everyone is focused on the baby in this painting – unlike last week’s Nativity, where Joseph was on guard and the shepherds looking up at the angel. 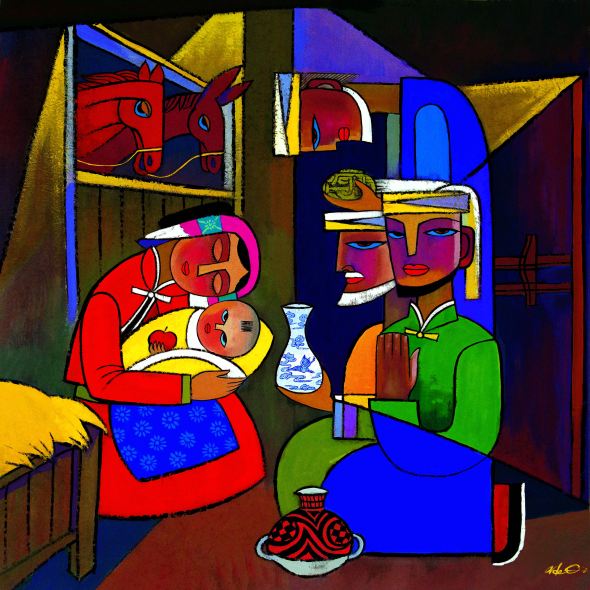 The Magi, He Qi, used with kind permission. For more, see www.heqiart.com

Joseph isn’t even present in this painting, which surprised me.

Given the disturbing Herod storyline – the King orders soldiers to kill all babies under two (not just newborns) in order to eliminate any competition for his throne – and the description of the Magi entering a ‘house’ in Bethlehem, we generally infer that they didn’t visit on the night of the birth, but probably many months later.

The Matthew text doesn’t mention Joseph, so He Qi has perhaps followed the text in excluding him, but not, it seems, in choosing the setting, which looks like it’s still a stable.

Baby Jesus is still clutching his red apple. Is this a reference to him as the new Adam, as Paul calls him in Romans? Is he giving us another chance to choose differently? Or is it more a Chinese reference than one of biblical imagery? Does anyone have insight to offer?

As in last week’s Nativity painting, Mary is bent over Jesus, enfolding him in a close cuddle. He’s lucky to have such a mother.

The wise men kneel or bow and offer their gifts, in beautiful containers. One, in a blue and white pottery jug, is the very centre of the painting. There’s a large bird painted on it – a crane? It could be frankincense or myrrh, both of which (along with the gold) are intended as gifts fit for a king. Various church traditions have grown up around the three gifts, saying, for instance frankincense symbolises priesthood and myrrh is for death and embalming, but the biblical imagery through the Old Testament of these gifts is simply that they are rich offerings for a king.

Whichever gift it is, why do you think He Qi has put it at the centre?

And let’s not take for granted this kneeling business. In the cultural context of the Ancient Near East, it is a huge break with social norms for older, high status men to bow and kneel to a peasant-class baby and a woman.

Which makes me ask: are there social norms that a recognition of Jesus might lead us to break or challenge?

When the Magi arrive, Jesus is almost two years old. The visitors are mystics or ‘wise men’ who have travelled from somewhere east. We don’t know how many of there were but we know they brought three gifts for Jesus.

Mary, Joseph, sheepherders, scholars, and Herod are all part of the one story, but each responds in a different way; each has a different experience of waiting and reason for waiting. Who do you most identify with? Why?

As you light your four candles this week think about the characters and what you need to work on to become more, or less, like them as you follow Jesus.

(Note that on Christmas Day you can light your central Christ candle.)

The Magi, He Qi, used with kind permission. For more, see www.heqiart.com

2 comments on “Advent in Art with He Qi: The Magi”