Advent in Art with He Qi: Escape to Egypt

A warm welcome to this year’s Advent in Art series, where we join thousands of others in contemplating artistic works. This week we are in the season of Christmas, and conclude the series.

The Advent in Art project extends into the Christmas period. As Mark Pierson writes in this week’s card:

We need Advent to keep us from having Christmas too soon, and we need the twelve days [of Christmas] to stop us giving it up too quickly.

This week’s painting is of Joseph, Mary and Jesus fleeing for their lives. 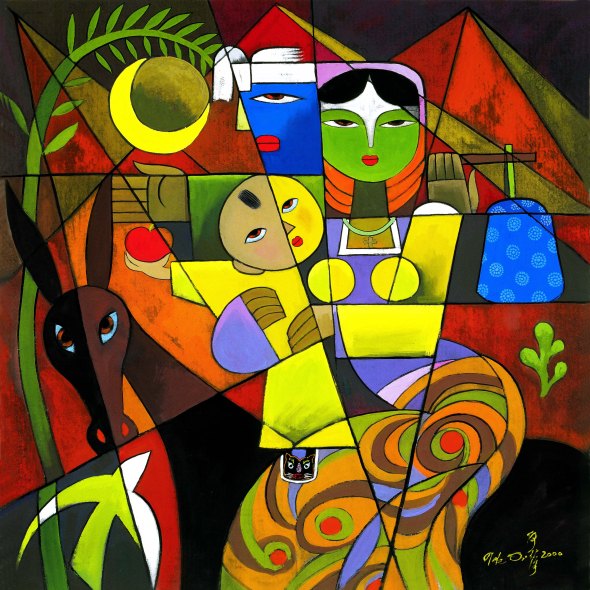 Jesus was a Palestinian refugee. His neighbours and playgroup buddies were murdered.

And so it begins. The violent reaction to Jesus’ presence – before he even starts stirring up trouble as an adult preacher – and the tragedy, death and hardship that runs alongside the good news of God’s new kingdom, even now.

Only a short time ago the angel choir was singing:

But as we have seen down the centuries, it only takes one powerful despot to steal everyone’s peace.

My family recently visited Partners Relief & Development, who work in Thailand and Burma, to bring life and hope to those oppressed and displaced by the despotic military regime in Burma. (You can read some of my reflections from that visit here.)

A recent report showed that Burma’s population is nine million people short of projections. This analysis argues that those people have been murdered or driven out of the country over the decades of dictatorship.

Kiwi Matthew Wilson recently visited Burma. He writes this about the current dire situation of the persecuted ethnic minority, the Rohingya:

The Myanmar government doesn’t care what happens to the Rohingya, they just want to stop them existing in Myanmar. One of the easy ways to achieve that is to put so much pressure on them that they’ll jump on boats and make very risky voyages elsewhere, where they might have some slim chance of a better life. Packed 50 to a boat, they head for Bangladesh or Malaysia; they don’t all make it, but many deem the risk to be a better option than what seems like certain slow starvation in the camps.

The government’s ‘Plan B’ for dealing with the Rohingya is to ask them to sign a form declaring that they’re not actually Rohingya, they’re Bengali. Aside from the erasure of an entire people group, the bigger problem here is that everyone fears as soon as they declare themselves Bengali, the Myanmar government will decide that they belong in Bengal – i.e. Bangladesh – and just push them over the border, making them refugees with even thinner legal status.

Ethnic cleansing doesn’t require killing everyone. That’s just how you get started.

Jesus and his family knew this kind of persecution and insecurity. In the dead of night, they packed essentials and fled their home country, not knowing when they would be able to come back:

2 13 After the scholars were gone, God’s angel showed up again in Joseph’s dream and commanded, “Get up. Take the child and his mother and flee to Egypt. Stay until further notice. Herod is on the hunt for this child, and wants to kill him.”

14-15 Joseph obeyed. He got up, took the child and his mother under cover of darkness. They were out of town and well on their way by daylight. They lived in Egypt until Herod’s death. This Egyptian exile fulfilled what Hosea had preached: “I called my son out of Egypt.”

16-18 Herod, when he realized that the scholars had tricked him, flew into a rage. He commanded the murder of every little boy two years old and under who lived in Bethlehem and its surrounding hills. (He determined that age from information he’d gotten from the scholars.) That’s when Jeremiah’s sermon was fulfilled:

A sound was heard in Ramah,
weeping and much lament.
Rachel weeping for her children,
Rachel refusing all solace,
Her children gone,
dead and buried.

19-20 Later, when Herod died, God’s angel appeared in a dream to Joseph in Egypt: “Up, take the child and his mother and return to Israel. All those out to murder the child are dead.”

21-23 Joseph obeyed. He got up, took the child and his mother, and reentered Israel. When he heard, though, that Archelaus had succeeded his father, Herod, as king in Judea, he was afraid to go there. But then Joseph was directed in a dream to go to the hills of Galilee. On arrival, he settled in the village of Nazareth. This move was a fulfillment of the prophetic words, “He shall be called a Nazarene.”

He Qi’s painting of the refugee family is hugely fractured, and yet Joseph, Mary and Jesus seem almost to be one figure. Their shakily-founded family unit is solidifying under stress.

Joseph points the way: this is his story of bearing dreadful responsibility. Mary is serene, looking straight at us. What is she thinking?

The infant Jesus’ face, like the moon, is half shining, half in darkness. The family is being pursued because he is extraordinary, but this is one of his most vulnerably human moments. He is hunted by a king, protected only by a couple of refugees, unable to make any choices himself.

(For much more detail on the rich symbolism of this painting, including insights into the Chinese elements, definitely head over to see this excellent piece by Cisca Ireland-Verwoerd at ArtWay. There’s so much I didn’t spot!)

As we, like this family, move out of the heady days of Nativity celebrations and into the ‘real’ world, how will we keep hold of the new kingdom of hope, peace, joy and love Jesus inaugurated?

Which of those do we need?

Which can we provide to other people?

As a new year begins, how will our presence in it make the world better?

The UNHCR.org.uk calculates that at the end of 2013 there were 51.2 million forcibly displaced people in our world. Fifty per cent of these were under 18 years of age.

They are refugees, asylum seekers, and internally displaced people caught in violence not of their making. They are forced to gather the few possessions they can carry and, with children and babies, walk long distances from their homes in search of a safe future.

Jesus was a refugee; an asylum seeker escaping from genocide. His parents were on the run from a violent dictator. Seeking safety, they were running for their lives and their hopes for a future.

Look again at He Qi’s art. Why do you think he has fractured the image so much?

When you light your five candles on Christmas Day and after think about and pray for children whose future is threatened by violence, in New Zealand and around the world. These are people for whom waiting is fearful, uncertain, and spirit breaking.

The Christian Church Season of Christmas (Twelve Days of Christmas) runs until January 6. You might like to keep lighting your candles, or just the Christ candle, through this time. We need Advent to keep us from having Christmas too soon, and we need the twelve days to stop us giving it up too quickly.

Mark would love to hear if the series is helpful to you. You can contact him at mark.pierson [at] worldvision.org.nz. And I would too! Please leave a comment if you are following along – even just to tell me that 🙂

1 comment on “Advent in Art with He Qi: Escape to Egypt”