This series is inspired by Candlestick Press‘ Ten Poems about Mothers, which contains the Fleur Adock poem (the first post is here). I’d love to hear your recommendations for poems to include in the series. Just leave a comment below. 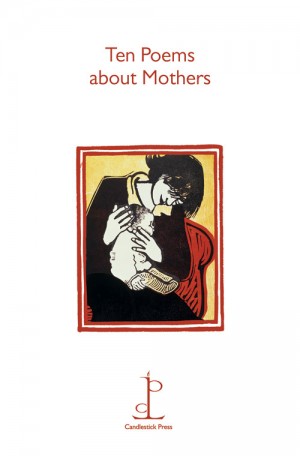 You can order any of the Ten Poems ‘cards’ from Candlestick Press.

I’ve read and performed a fair amount of poetry in my life, through Speech and Drama lessons, competitions and exams, school and university. Fleur Adcock was one of the first New Zealand poets I encountered, when I was about nine, so I’ve always had a soft spot for her.

You’re glad I like the chiffonier. But I
feel suddenly uneasy, scenting why
you’re pleased I like this pretty thing you’ve bought,
the twin of the one that stood beside your cot
when you were small: you’ve marked it down for me;
it’s not too heavy to be sent by sea
when the time comes, and its got space inside
to pack some other things you’ve set aside,
things that are small enough to go by water
twelve thousand miles to me, your English daughter.
I know your habits – writing all our names
in books and on the backs of picture frames,
allotting antique glass and porcelain dishes
to grand-daughters according to their wishes,
promising me the tinted photograph
of my great grandmother. We used to laugh,
seeing how each occasional acquisition
was less for you than for later disposition:
‘You know how Marilyn likes blue and white
china? I’ve seen some plates I thought I might
indulge in.’ Bless you mother! But we’re not
quite so inclined to laugh now that you’ve got
something that’s new to you but not a part
of your estate: that weakness in your heart.
It makes my distance from you, when I go
back home next week, suddenly swell and grow
from thirty hours’ flying to a vast
galactic space between present and past.
How many more times can I hope to come
to Wellington and find you still at home?
We’ve talked about it, as one has to, trying
to see the lighter aspects of your dying:
‘You’ve got another twenty years or more’
I said ‘but when you think you’re at death’s door
just let me know. I’ll come and hang about
for however long it takes to see you out.’
‘I don’t think it’ll be like that’ you said:
‘I’ll pop off suddenly one night in bed.’
How secretive! How satisfying! You’ll
sneak off, a kid running away from school –
well, that at least’s the only way I find
I can bring myself to see it in my mind.
But I see you now in your Indian skirt
and casual cornflower-blue linen shirt
in the garden, under your feijoa tree,
looking about as old or young as me.
Dear little Mother! Naturally I’m glad
you found a piece of furniture that had
happy associations with your youth;
and yes, I do admire it – that’s the truth:
its polished wood and a touch of Art Nouveau
appeal to me. But surely you must know
I value this or any other treasure
of yours chiefly because it gives you pleasure.
I have to write this now, while you’re still here:
I want my Mother, not her chiffonier.

When I first read this, I didn’t notice till the last few lines that it was written in rhyming couplets. What crafting.

Apparently when it was first published in the New Zealand magazine, The Listener, people rushed to buy the edition just for the poem. It struck a chord with New Zealanders.

The population of New Zealand – actually here – is around 4.5 million. There are another one million Kiwis overseas at any time. We know about distance from family.

All of my great-grandparents were born in New Zealand, but most of them still had family ‘at Home’ in the United Kingdom somewhere, whom they could never expect to see again. A dangerous three-month ocean journey lay between them.

In our cross-cultural family, we are always half a world away from half the important people in our lives. But even people who live down the road from their mothers know the other kind of distance Adcock talks about: age.

She focuses in this interview on the value of physical reminders, and I can understand that, far from home and family:

You realise you can’t substitute things for people but things are important too because they are symbolic of people. They remind us.

But I’m more in sympathy – now at least – with the last lines of the poem.

I wrote, a while ago, about my gradual journey towards loosing the sentimental chains that attach us to objects we may not even like that much.

I wish I’d had that box instead of the one that contained my Grandma’s slightly broken crystal sherry decanter. When my auntie and I were sorting through her house after she died, I took some crystal things ‘to remember her by’ for me and my sisters. I was eighteen and they seemed classy. I also took three cushions for my flat (still in use, between my sister’s house and mine) and two of her hundreds of awesome cardigans.

The crystal decanter, which I’d never seen her use – it was presumably in the front room we never spent much time in – got cracked in one of my many moves, years ago, but I had the idea that this kind of item, owned by my Grandma, was something one ought to keep. So it moved from flat to flat to house to house with me, always a bit broken and never used. I’ve never drunk sherry in my life, for heaven’s sake.

In my year of Pinterest-based organisational self-coaching, I’ve come to agree with all the decluttering gurus who urge us to purge. Here’s one key lesson from them: whether or not I keep a broken, unused glass bottle has nothing to do with how much I love and remember my Grandma. I could smash it on the ground tomorrow and I would still love and miss her. That realisation was liberating! So the decanter has gone.

As usual, poetry can do it better, catching my three paragraphs in one line:

I want my Mother, not her chiffonier.

You can see all the Sacraparental posts featuring poetry here.

If you’re new to Sacraparental, please feel very warmly welcomed to join in the conversation in the comments below, and to follow along for more stuff on Facebook (for daily extras), Pinterest and Twitter.