Advertising that Promotes Rape Culture: My Complaint to the Advertising Standards Authority

[Update: we won! But there’s good news and bad news. My take on the decision is here.]

I got my rant on yesterday and today I got my complain on.

This is the text of my formal complaint to the Advertising Standards Authority. They’ve already refused to consider two complaints against this ad, so I don’t know what the chances are, but I thought I had to put this stuff in writing.

All comments welcome, and feel free to cut, paste, copy and adapt at will and without attribution if you want to make your own complaint.

Catch up, or skip to the short, fun version in yesterday’s post.

I am writing to complain about a billboard in Hataitai, Wellington, advertising the services of Access Solutions. I have also seen it in other locations.

I realise that this billboard has had a complaint dismissed by the Chair already. I believe that some important aspects of the billboard’s offensiveness and harmfulness were not considered in that complaint – neither by the complainants nor the Chair – and I would appreciate a full Complaints Board hearing this new complaint. 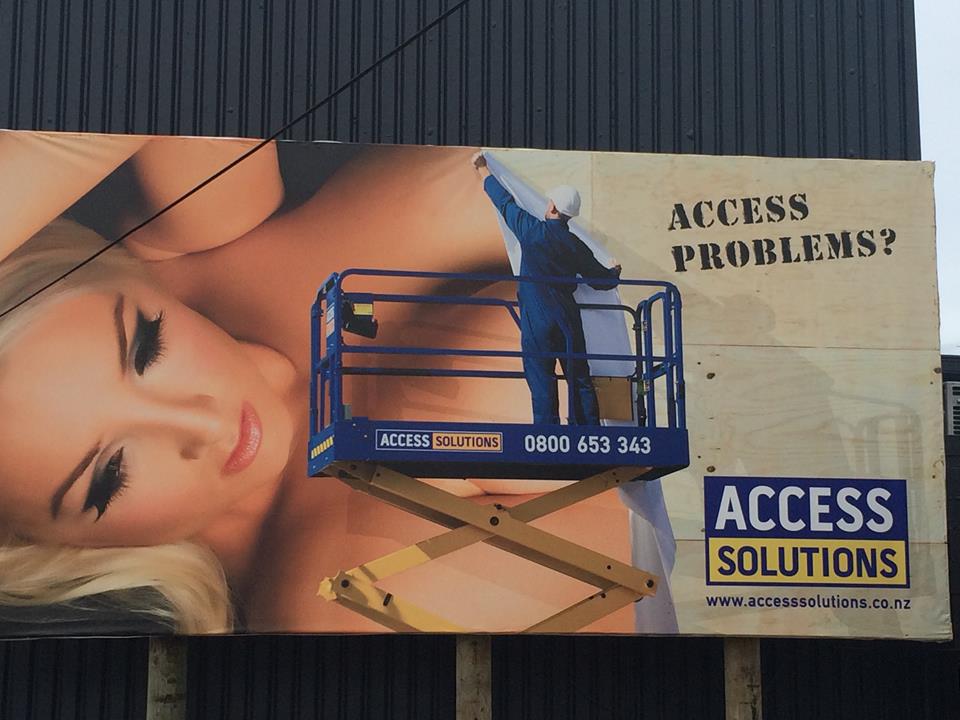 A man wearing overalls and a hardhat is using an Access Solutions mechanical platform lift to work on the billboard image of the naked woman. He is reaching up across her breast trying to work on the corner of a section of the poster.

The caption on the bare third of the billboard reads ‘Access problems?’ and is followed by the logo for Access Solutions.

There is a billboard showing this advertisement in my suburb, Hataitai, on a prominent corner in the shopping village. Nearby are two kindergartens, a primary school, a GP surgery, and Plunket rooms, as well as general shops and cafés.

My complaint has three parts.

1) The joke of the advertisement relies on presenting women’s bodies as objects that men try to access, regardless of consent. This promotes what some call ‘rape culture’ and is socially harmful.

2) The use of a naked woman to sell unrelated services is sexist and degrading to women.

3)  A naked woman in a sexually suggestive pose on a large billboard in a suburban environment is inappropriate, particularly for children.

Part 1: The Advertisement is Socially Harmful

The Code of Ethics provides:

All advertisements should be prepared with a due sense of social responsibility to consumers and to society.

Violence – Advertisements should not contain anything which lends support to unacceptable violent behaviour.

The Code for People in Advertising provides:

Advertisements should not portray people in a manner which is reasonably likely to cause serious or widespread hostility, contempt, abuse or ridicule.

Advertising must be socially responsible. This advertisement is not. It promotes ‘rape culture,’ the pervasive, largely unstated set of beliefs in a society that encourage male aggression, and sexual violence against women. Rape culture sends the message that women’s consent is not very important and that coercing women into sexual contact is acceptable.

Sexuality and psychology academic at the University of Auckland, Dr Nicola Gavey says this about rape culture, on the university web project Sexual Politics Now:

At its core the term rape culture draws attention to two key points – our society’s ambivalent attitude towards rape and the way that mundane aspects of our everyday gendered culture actively create the ‘conditions of possibility’ for sexual violence.

Contrary to Gilbert’s claim that we “sanction strongly against” rape, messages about sexual violence in our society are rather more two-faced. Yes, rape and other forms of sexual violation are on the books as serious crimes. But a whole lot of social prejudices (about gender, sexuality, class and race) affect whether or not a rape will ever be reported to the police, let alone whether it will be investigated and taken through the courts. These prejudices also coalesce in the court of public opinion to trivialize some rapes, to blame and silence victim/survivors, and sometimes even to pat men on the back for borderline legal sexual conquests. So while some cases of rape garner widespread social condemnation, many more remain invisible.

At the same time, rape is made possible through the ways men are taught to understand their sexuality. The way they are encouraged to develop a sense of sexual entitlement and to regard women as props for indulging it. Not all men take up this invitation. Of course not. But there is a systemic problem in our society with the messages young men are being given. It is fed in equal doses by conservative traditional cultural ideals for masculinity and contemporary portrayals of male sexuality within popular music, advertising, mainstream pornography, men’s magazines, gaming, and other spheres of popular culture.

I am certain that Access Solutions does not intend their billboard to promote rape or rape culture. But in fact, that is what the billboard does.

The advertisement is only funny if the ‘access problems’ can refer both to pasting up the poster and to getting access to a woman’s body, particularly her naked breasts.

The very idea that a woman’s body is something a man needs help getting ‘access’ to presents women as objects, and says that their consent doesn’t matter. The double entendre of this billboard says: “Is a woman saying ‘no’ to you? We can help you get access!”

If anyone finds this interpretation and its connection to rape culture hard to understand, may I suggest imagining you have a ten-year-old in front of you who is asking why the billboard is funny. Try to explain the humour.

Probably unintentionally, this advertisement contributes to rape culture and is socially harmful. This is a breach of the Code, as it a) is not prepared with a due sense of social responsibility, b) promotes violence in the form of disregard for consent to sexual contact and c) supports rape culture which puts women (and men) at widespread risk of abuse.

I urge Access Solutions and the Complaints Board to consider seriously how this kind of ‘humorous’ advertisement contributes to rape culture in New Zealand, and remove these images from our landscape.

Part 2: This Advertisement is Sexist and Degrading to Women

Code for People in Advertising

Even apart from the rape culture message of this advertisement, it is sexist and degrading to women.

The advertisement shows a woman naked and lying down, while a clothed, upright man reaches across her breasts. There is a power imbalance implied by the difference in clothing and position.

The woman is objectified further by being captured in a photograph that is being pasted up by a man.

It is also degrading to men, suggesting that they want ways to circumvent women’s consent and consider woman objects to be accessed.

Further, this advertisement, even if none of these other factors were at play, uses sexual appeal to sell unrelated services and is therefore clearly in breach of the Code.

In the Chair’s previous ruling, dismissing a complaint against this billboard, she said that the provision for humour and satire saved the advertisement:

The Chairman was of the view that the Basic Principle 6 applied to the complaint before her. She said the difficulty the man was shown having while placing the next part of the advertisement, that would obviously be the woman’s breast, coupled with the text “Access problem?” relied on a level of risqué humour and double entendre to provide a contextual link between the man’s plight and the product.

While the Chairman acknowledged some people may find this type of humour distasteful, it was provided for under Basic Principle 6. Therefore, the Chairman was of the view the advertisement did not reach the threshold to have used sexual appeal to sell an unrelated product.

That ruling surely takes almost all the power of the Code away, if anything that is sexist or degrading to women is allowable as long as it is funny. Rule 5 makes it clear that using sexual imagery that is unrelated to the service being advertised is unacceptable. I urge the Complaints Board to give this Rule due weight.

This advertisement is not saying anything satirical about women as a group. The humour relies entirely on an allusion to sexual contact, in the context of a woman’s refusal or inability to consent. I urge the Complaints Board to reconsider the role of humour in this advertisement and whether it ought to outweigh the damage done by the message of the advertisement.

Part 3: This Advertisement is Inappropriate for Children.

Offensiveness – Advertisements should not contain anything which in the light of generally prevailing community standards is likely to cause serious or widespread offence taking into account the context, medium, audience and product (including services).

The Code for Advertising to Children applies to ‘all forms of media that influence children whether contained in children’s media or otherwise’, and provides:

Principle 1 – Advertisements should be prepared with and observe a high standard of social responsibility.

Advertisements should not include sexual imagery and should not state or imply that children are sexual beings and /or that ownership or enjoyment of a product will enhance their sexuality.

Advertisements should not include images that are degrading to any individual or group.

This billboard a) uses sexual imagery, b) unintentionally promotes rape culture, and c) degrades women. It is in breach of the code in three different ways when viewed by a child, as is inevitable in its placement in my suburb.

The woman is naked, in a sexually suggestive pose. A sexual joke is made by the caption of the advertisement.

It is on a large, prominent billboard in a suburban environment, within a hundred metres of a kindergarten and GP surgery, and within 300 metres of a primary school, Plunket rooms and another kindergarten.

I don’t want sexual imagery in front of my young children, even if it were consensual. In this case, with the aggravating factor of a joke about sexual violence, I really don’t want to field questions from my children about this advertisement. It is wholly inappropriate that this should be on display in a suburban environment.

This is not merely a picture of a woman’s naked body – which in itself I would not argue to be offensive. She is wearing ‘sexy’ make-up, lying down and not wearing clothes. This is too sexually explicit for a suburban location frequented by young children.

In view of the many ways this advertisement clearly contravenes the Code, I urge the Complaints Board to reconsider whether the fact that it is trying to be funny ought to give it immunity.

Sexism in kids’ TV shows: how to spot it and what to do about it

(Hopefully not) Passing on Rape Culture

6 comments on “Advertising that Promotes Rape Culture: My Complaint to the Advertising Standards Authority”