A friend got in touch this morning about this article, gone viral, about a little boy standing up for a woman being verbally abused by a man in a street.

I think this little guy is awesome, but I don’t find it a wholly positive story. See what you think:

That was my trigger point. The B word. I ripped off my headphones prepared to stand up for myself when this little boy who was walking alongside his mother and little sister in a stroller looked at the guy and said, “Hey. That is not nice to say to her and she didn’t like you yelling at her. You shouldn’t do that because she is a nice girl and I don’t let anyone say mean things to people. She’s a girl like my sister and I will protect her.”

The man was immediately embarrassed and started gathering his lunch to leave. I asked the mother if I could hug the little boy (his name is James) and I told him how grateful I was for him. He just shrugged and said “Well I just wanted to make sure your heart was okay.”

It sounds to me like little James has awesome parents who have helped him develop great skills in empathy (putting himself in her shoes), compassion (worrying about her heart), courage (standing up for her to an older man) and sophisticated emotional communication (‘she didn’t like you yelling at her’). I’m impressed.

If only it weren’t for that last line: ‘She’s a girl … and I will protect her.’

Chivalry, especially in a child, can be endearing, and, as here, indicative of deeper kindness. But there are (at least) four big problems with teaching boys that they need to protect girls.

Boys can be victims

What if the next victim they see is a boy, and they don’t realise he needs their protection and help too?

What if James needs help one day and doesn’t realise he can ask for it, because he’s a boy, or look for it from a girl?

What if there’s no boy around next time a girl is in trouble?

Girls and women need to develop resources to stand up for themselves without hoping a boy is around the corner to help.

Girls can be protectors

What if a girl is in a position to help and protect, but doesn’t know she is supposed to?

What if a victim doesn’t realise the girl next to them could help?

Here we get to the systemic problem: chivalry is just another way of devaluing women and saying that they’re not as good as men. They’re weak and in need of protection. We can’t expect them to look after themselves.

Chivalry is an outworking of a sexist world that says men and women are different in dramatic ways, and uses that as an excuse to pay women less, marry them off against their will, deny them education and generally make life harder. Even if it comes with the ‘benefit’ of male ‘protection’.

For more unpacking of this point, check out:

Nerdy Feminist: No chivalry, thanks! 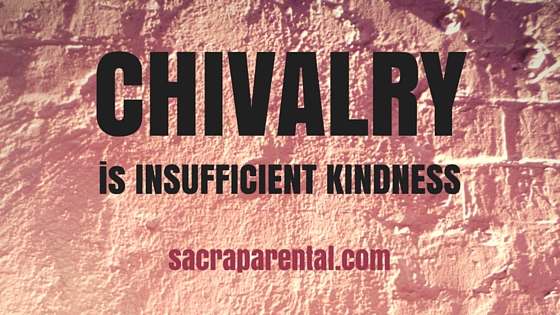 This is a wonderful story about a brave and compassionate little boy, and I definitely want my children to learn these skills and be like him. Both my son and my daughter. I teach them that we all need to look after each other, and be brave and kind.

Bravo, James’ parents. And let’s extend this great teaching to all our children.

You can keep up with Sacraparental via Facebook for daily snippets, Twitter for general ranting and raving and Pinterest for all sorts, including a Gender Politics board.

The Maisy Test: how to spot sexism in kids’ tv shows and what to do about it

Kids for Social Justice: 6 ways kids can change the world

(Hopefully not) passing on rape culture

8 (easy and hard) ways to make life better for women

2 comments on “Chivalry is Insufficient Kindness”