Every so often I pretend I’m a food blogger, because I’ve done some rare magic in the kitchen. I’ll be super honest, since we’re friends: I blog about baking about as often as I bake.

I’m no kind of expert, but I’m a brave experimenter when it comes to adapting recipes to fill the niches I’m interested in. 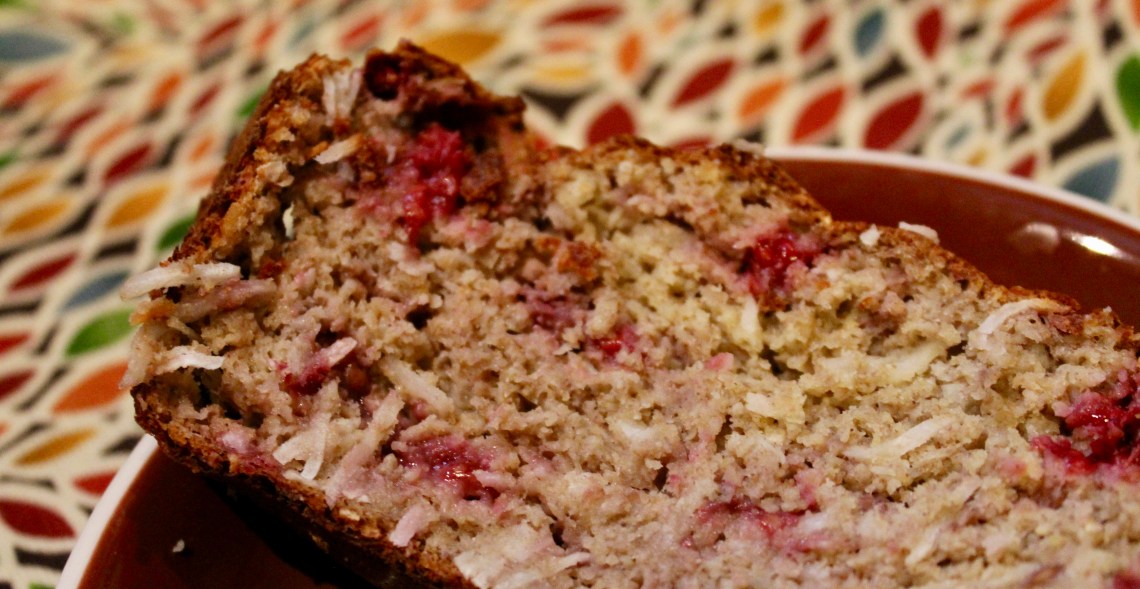 This time my quest was to make a banana loaf that used oats instead of wheat flour, and without extra sugar – I wanted just the sweetness of the fruit.

I already had some loaf recipes on my Allergy Queen Pinterest board, so I based my version on a combination of a few of those. The end result is added-sugar-free, and also free of all of the top-eight allergens (the recipe includes eggs, but you can substitute those for chia seeds if you need to be egg-free – see the allergy notes at the bottom.), so that makes it a handy recipe to have when you have guests with different needs.

My recipe owes most to Nadia Lim’s lemon, coconut and honey loaf, with its banana-and-egg base, but mine has no honey, and adds chickpeas (don’t worry, no one will know they’re there) and raspberries.

I made one version last night, and since it had almost gone by dinner tonight, and I already had the oven on, I made a second version tonight. That’s half gone now, too… It takes about ten minutes to make, then 40-60 minutes in the oven. The way I make it, it uses one blender and one bowl and spoon. Pretty economical on the old dish-washing front.

Here’s the basic recipe, with notes and substitutions in the second copy below it.

Using a blender, grind the oats, then mix in the cinnamon, salt and baking powder. Set these dry ingredients aside.

Using the same blender, whizz up the bananas, eggs, chickpeas, and vanilla.

Pour the wet mixture into a mixing bowl. Gently stir the dry ingredients in. Mix in  the coconut.

Add the raspberries, and stir very briefly to just barely mix them in (unless you want the whole loaf to go pink).

Pop in the oven for 40 minutes initially, and check if it is done by inserting a skewer (if the skewer comes out clean, it’s ready, if it’s still sticky, the loaf needs longer.) It might well take more like 60 minutes.

Let it cool, then wolf it down, for breakfast, lunch and/or tea 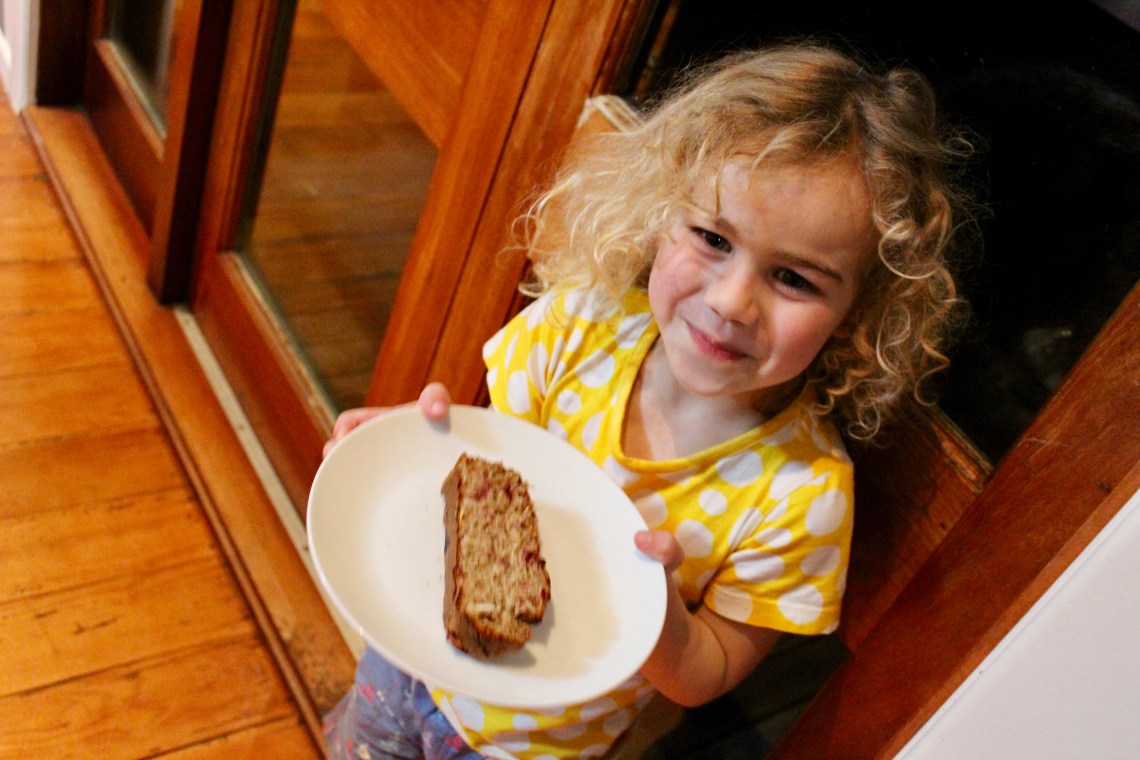 Banana and Raspberry Ninja Loaf: The Director’s Cut (with Substitutions and Adaptations)

So far this seems like a really forgiving recipe (just about the only kind I’m interested in). You could sub any of the ingredients and you’d do fine. Let me know your ideas.

I made it with 4 large bananas the first night, and 3 C of oats and flour. It made a huge loaf. I didn’t have as many bananas spare tonight so made a 3-banana-2-C-oats version, which was about two-thirds the size. Both worked well.

This recipe uses chia seeds instead, and this one has no eggs or substitutes at all, so go with what you like baking with.

I threw in half a can because that seemed about right. I’d probably just do a whole can next time – they just disappear into the batter and bump up the protein value of the loaf. Any beans will do, depending on your desired colour. I’ve made the chocolate bean cake with kidney beans or a four-bean mix before, too – any combination works just the same, it seems.

And/or any other flavour profile you like. Nadia Lim’s version has the zest of two lemons, for instance.

Bound to be optional, right?

Or any flour you like. Wheat flour, gluten-free, ground almonds, whatever.

You could also add cocoa to this mixture to make a chocolate version. Actually, I might do that next…

Less would be fine, and you could cut it out completely if you like – just add a bit more flour instead. A full cup makes for a very coconutty loaf, as you can see in the photographs. I use long-thread coconut.

I didn’t measure these. The room temperature is important because if you add frozen berries that slows down the cooking process significantly, and you risk burning the loaf on the outside before it’s cooked in the middle.

Any other berries or other fruit would be fine – they’re just a nice additional flavour. Dates, maybe? Also chopped nuts would be yum.

What else could you add?

I made the first loaf with half a cup of rice bran oil in the wet ingredients and just forgot it in the second loaf. It seems fine! So I won’t be adding it in future, especially since the loaf gets eaten super fast and doesn’t need any help in keeping fresh.

If you’re trying to get extra calories into anyone, go for it.

If you or a friend would like to try using Brewer’s yeast to support lactation for breastfeeding, add a couple of tablespoons into the recipe where it won’t be quite so potent-tasting. Ditto ground linseeds.

Oats are also on the list of foods that *might* help with milk production, so this is a good go-to recipe if you want to go down that route. If milk production is a concern to you, though, feeding on demand and a few other techniques are more effective, according to the evidence we have. Read more about that here and here.

Depending on how ripe your bananas are, and what else you add, this isn’t a very sweet loaf. My children and husband and I have all eaten several slices over 24 hours, so there are no complaints here, but you could add something sweet if you like – honey, sugar, maple syrup, rice syrup, stevia, whatever.

Anything you’re trying to hide

Protein powder? Chopped spinach if it will be disguised by cocoa? Nuts and seeds galore? This recipe will take whatever you throw at it

One more thing: this would make good muffins, I reckon! I’ll be trying that next. 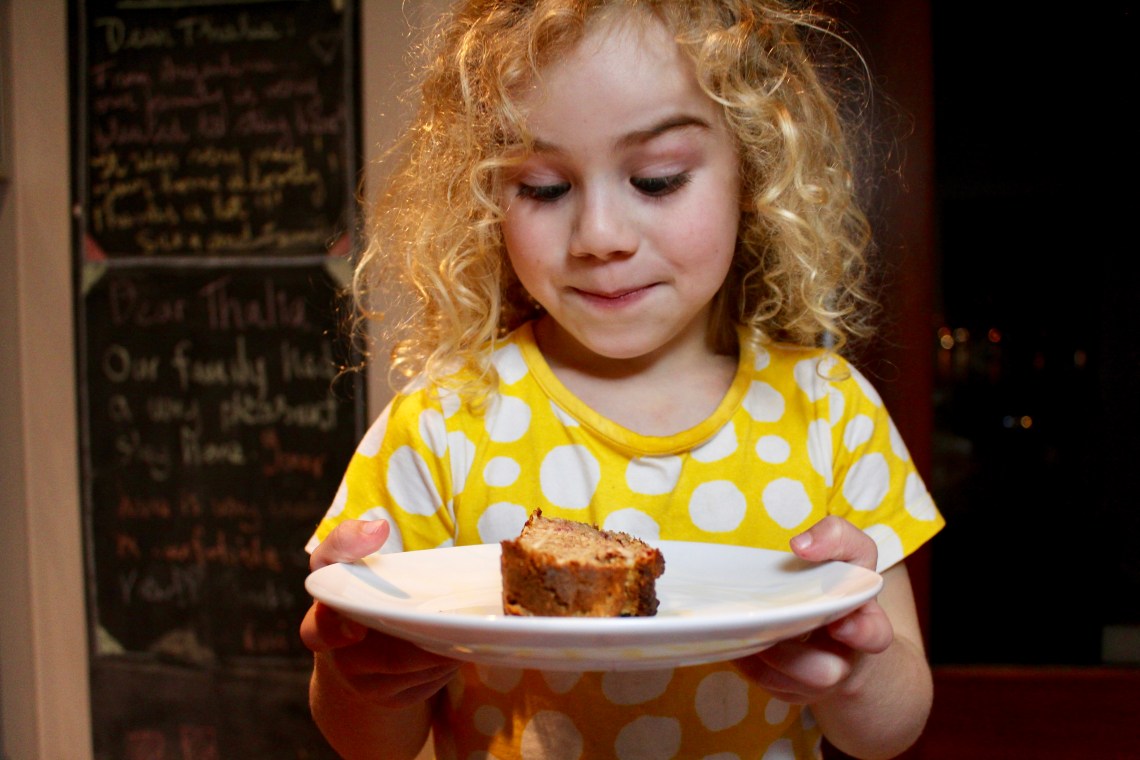 For the astonishing chocolate bean cake (no flour, no dairy, no grains – based on beans!) and other ideas for cooking with legumes, head to the Sacraparental New Year’s Guide to Legumes, and while you’re at it, you might like my intro to cooking with Gateway Grains like barley, oats and quinoa.

My not-a-food-blog also includes some recipe posts for: 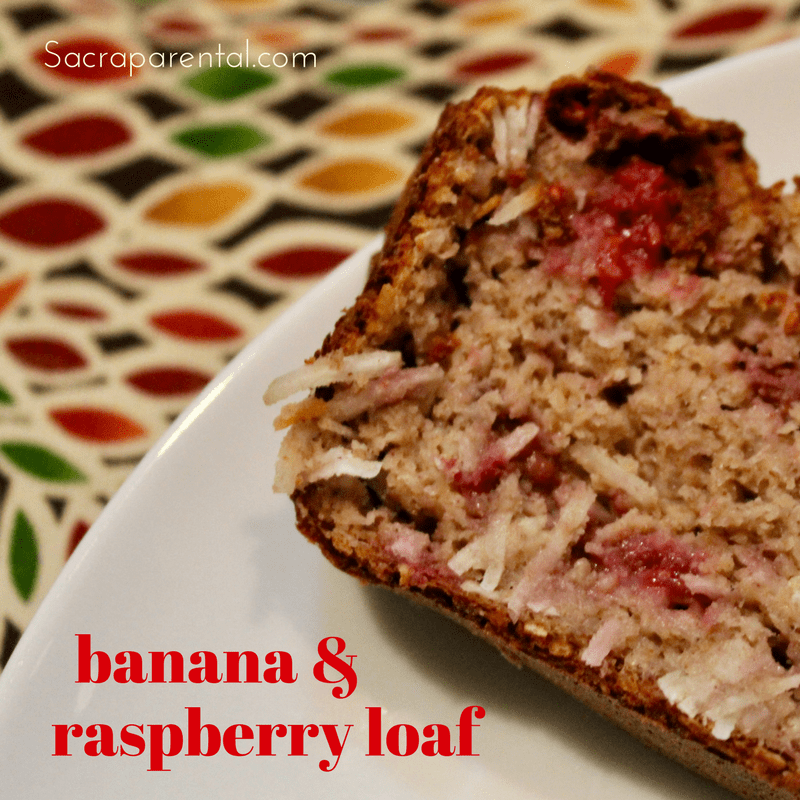