I keep reading this baseless crap about how boys won’t read stories about girls, so we should just stop writing and publishing them. It’s nonsense. Worse, it becomes a self-fulfilling prophecy, because how will boys read about girls if everyone’s been warned not to offer them those books?

I recently wrote a round-up of 12 notable New Zealand picture books, published in 2016, as chosen by the Storylines trust. Of these books, not a single one featured a human girl as a character.

Plenty of boys, though! This is what I found, when I crunched the numbers:

Whether you’re counting covers, stars or supporting characters, male characters outnumber female characters at least three to one in almost every book on this list. Yes, in 2017.

Only four of the twelve books star female characters, and not one is a little girl. There’s a penguin, a nameless witch, a mythical dancer who gets eaten by a jealous (male) eel, and one human woman who goes to war, despite sexist discouragement, which is given in repeated detail.

This is a problem! One of the reasons we celebrate New Zealand publications is so our kids can see lives like theirs in the pages of the books they read. This kind of imbalance, part of an unfortunate worldwide trend, says to kids that it’s just more interesting to be a boy.

And what is a Māori or Pasifika girl to make of this line-up? There are no protagonists here that look like her. Danny, Māui and Carlos are kids of Māori appearance with starring roles, but they are all boys.

[Read more at The Spinoff.]

Several people commented after my piece came out that this publishing and award bias was just a pragmatic reality, because we all know that boys won’t read about girls, but girls will read about boys.

This is crap. Total bullshit, for so many reasons.

For starters, it is not true. I’ve been searching for any scrap of evidence to support the proposition, and I’ve found zip. Nothing at all.

I did find a literature review from the United Kingdom’s National Literacy Trust on the problem of boys’ reading lagging behind that of girls. They found studies giving all sorts of contributing factors, but the idea that boys are put off reading about girl characters is notable by its absence.

The existence of this myth is itself a function of misogyny. People love spreading ‘facts’ that justify sexism. 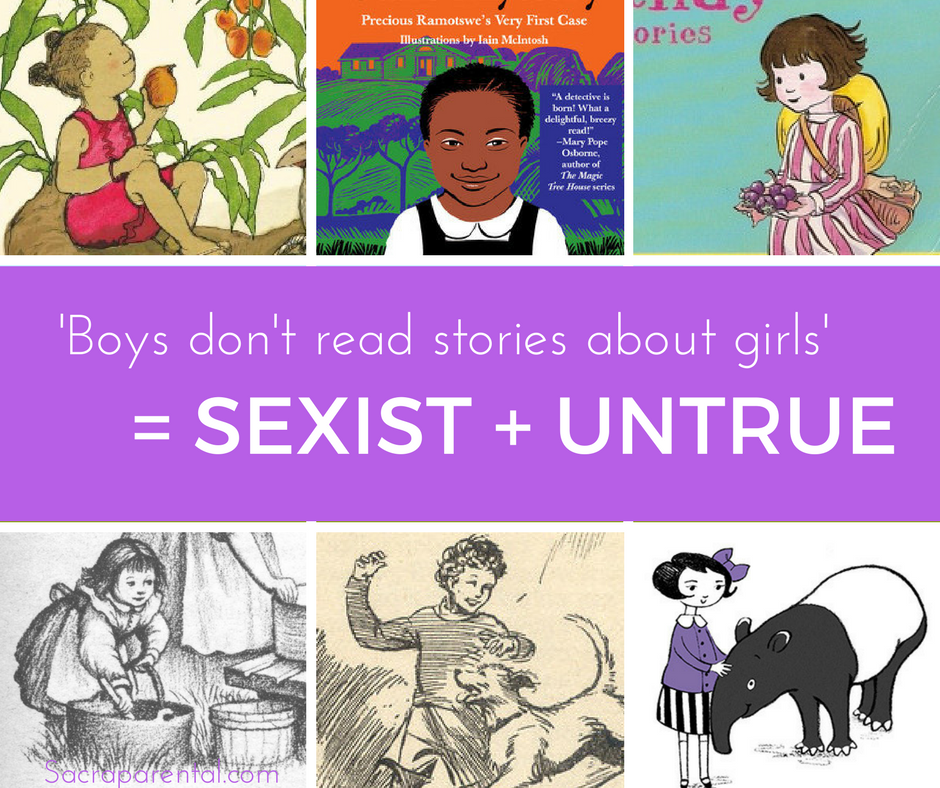 And you know what? Even if it were true, it would not be a reason to stop writing about girls. No! Rather, it would be a reason to challenge the misogyny we’re planting in very young minds. Isn’t it horrifying to give little boys the message that girls are just not worth bothering reading about?

We read – all of us, not just kids – to see two kinds of worlds: our own, and the ones we can’t imagine. We read to see ourselves reflected, and to peek into other people’s lives.

Our boys and our girls all need to see themselves in books, to have their stories told and their lives examined. All our kids also need to read about people not like them to expand their horizons and their empathy.

Back to ‘it’s total crap.’ Let me tell you some of my five-year-old boy’s favourite chapter books, the ones we have read aloud at bedtime for months. This can also function as a list of recommendations, especially if you have someone in your life who likes chapter books but is not up for anything remotely scary.

Anna Hibiscus is a charismatic little girl of African and Canadian heritage, living in an unnamed African country based on Nigeria. This is not someone outwardly like my son, right? We’ve read all eight books in the series aloud at bedtime, some of them twice. Also interesting: the same brilliant author, Atinuke, has written a matching series, set in the same country, but in a rural village, starring a boy. My son is not a fan of the boy-based series, for no particular reason, and we stopped after one book.

Milly-Molly-Mandy is a little girl living in rural England in the 1920s. Not exactly relatable, right? He loves these books! Gentle stories about very small adventures (remembering items on a shopping list; finding a rabbit; going to a party). He’s never been put off by her being a girl. It has simply never come up.

We’ve just started reading Little House on the Prairie, complete with accompanying commentary (from me) on racism and colonialism. We’ll also, no doubt, need to talk about misogyny when Laura is forced to wear a bonnet that restricts her sight, because she’s a girl. I’m keen for my little guy to grow up aware of his privilege. (This article reflects my approach to commentating on sexism, racism and other awfulness in books we read together.)

Another series that we can’t get enough of is Mango and Bambang, by Polly Faber, illustrated by Clara Vulliamy. We have read all four and are desperate for the next one. Mango is a confident, talented girl (her specialties include karate, chess and wiggling her ears) who rescues an anxious tapir. Before Mango saves him, Bambang is quivering on the ground, lost in her unnamed city, which looks to me like a cross between Kuala Lumpur and New York. The illustrations are ambiguous, but my best guess is that Mango is South East Asian. My son is not.

We’re also big fans of Alexander McCall Smith’s Precious Ramotswe mysteries for young readers – the origin stories for the proprietor of the No 1 Ladies’ Detective Agency. A Botswanan schoolgirl solving mysteries in rural Africa? My Pākehā five-year-old boy loves her.

My little guy has read and adored Charlotte’s Web, Joy Cowley’s Snake and Lizard books, and he’s now on a Famous Five kick. All of these feature fantastic female protagonists (yes, plenty of editing of Enid Blyton, too – I’ve given up and leave the Famous Five to my husband these days.)

My son has rejected plenty of books along the way as not being his cup of tea (we only got through two chapters of Heidi, sigh), and he’s read some great books featuring boys, too, like Farmer Boy (also heavily edited – no hitting of children in my bowdlerised version), Winnie-the-Pooh and James and the Giant Peach. He has just been given two Thirteen-Story Treehouse books, which he finds utterly hilarious.

He’s also at a stage of being very firm that people know he’s a boy, not a girl. He has long hair, which he is very attached to, and he is well aware that it confuses people. He won’t read a book that’s pink, or stars princesses or fairies, for that specific reason, and suffers his hair to be tied back only for gymnastics because it’s the rules.

The fact that his reading list has had a majority of female characters is a result of two things: he has not shown any dislike for reading about girls, and, crucially, I have been sure to search out and offer him those stories.

Here’s another problem, which I write about at length in this piece for The Spinoff, focusing on picture books: where are the books in my list or anyone else’s which are chapter books about New Zealand girls? I haven’t found a single junior chapter book featuring a Māori or Pasifika girl. I’ll add it to our reading pile if you can help me out. Publishers, authors, where are these books?

My son, my lovely son who is going to grow up into a privileged white man, needs to understand girls and women and people from all sorts of ethnic backgrounds and not see them as ‘other’. The books he reads and the other media he consumes are of course a big part of this.

In this wonderful, challenging article by Pamela Clark – important reading for any man who wants to support women – ‘35 Practical Tools for Men to Further Feminist Revolution‘, #3 is:

3. Consume cultural products produced by women. In whatever your interests are—French cinema, astrophysics, baseball, birdwatching—ensure that women’s voices and women’s cultural products are represented in what you are consuming. If they are not, make an effort to seek them out.

Please, let it stop here. With us.

The Maisy Test for Sexism in Kids’ TV Shows