One of the biggest joys in my life right now is a Facebook group called BRILLIANT + AMAZING + WRITERS + MOTHERS. It is what it says on the tin. We’re all people juggling motherhood with writing, and being brilliant and amazing while we do it.

Today I wanted to introduce you to one of the Brilliants, illustrator and writer Rowena Fry, who has a new book out, aimed at anyone who’s into New Zealand politics – surely that’s everyone in Aotearoa about now?

Here’s Wallace Chapman from Back Benches introducing the book to get us started:

My name is Rowena and this is my picture. Actually, it’s my book. Political Activity Book showcases 43 political faces of past and present and invites you to take to them with a really sharp pencil. 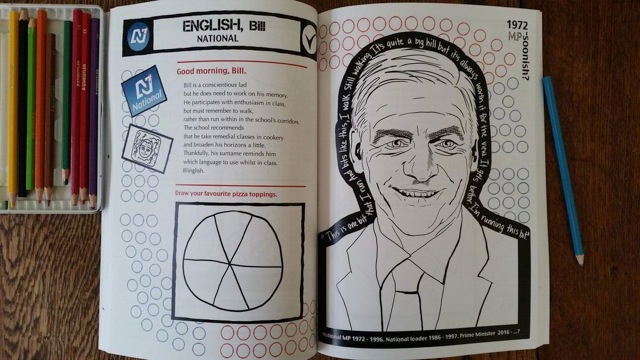 The Political Activity Book was first conceived in 2014, when I was in my final year at Massey, studying illustration. I had met someone who told me they had never voted and weren’t planning to vote in the upcoming general election. I was quite unsteadied by this. I just assumed that most people voted, even if it was just for the McGillicuddys.

At the same time, I was volunteering in an opshop which had a small anarchist bookshop within the store. In the shop, I came across a colouring book of badly drawn activists. It had so much potential and I found my fingers twitching with ideas.

With a background in scriptwriting, as well as a strength in drawing faces and bodies, I got started in creating in what I thought might engage some non-voters. A childhood activity, mixed with a few lines of satire. 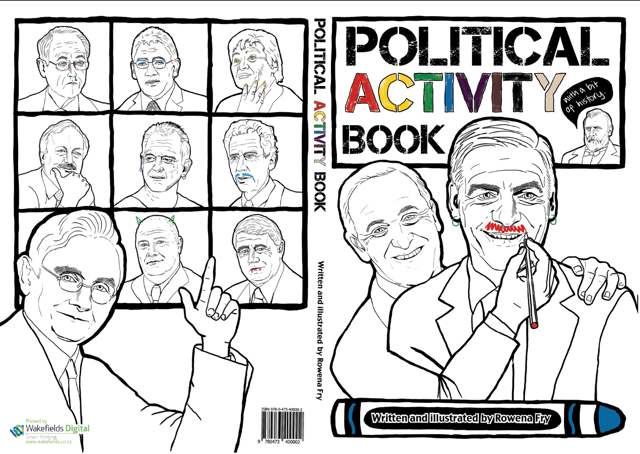 The original book featured the 13 leaders of parties that were standing in the 2014 election. But, of course, as soon as the 2014 election ended, I realised my work was dated. So, three years later and 30 leaders later, I’ve expanded the book to make it historical as well as current; starting with Norman Kirk, since he’s the first Prime Minister I remember. 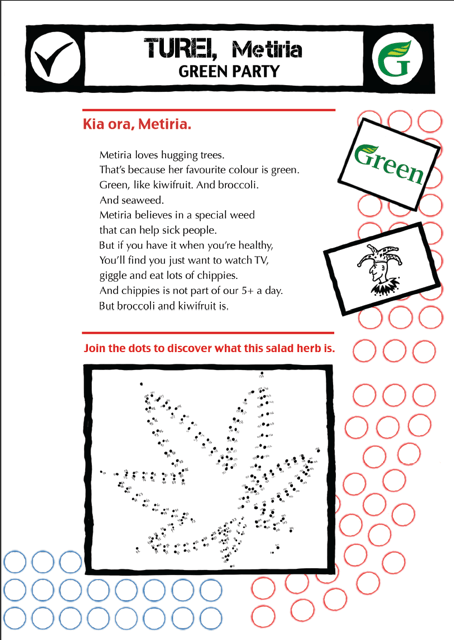 Most of the leaders of most of the parties are featured in the book, whether they made into parliament or not, such as Bob Jones in the 1980s and Colin Craig in the last election. 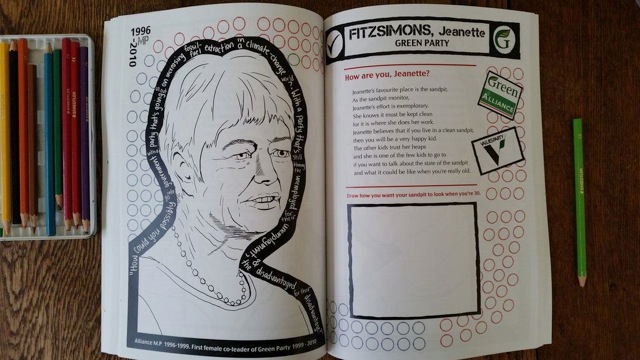 Some of the timing of recent political events has been challenging yet fun to work around. My original cover featured just John Key with his beaming smile. Then he resigned, so I redesigned it, showing Key drawing a Labour-red moustache onto Bill English.

Then last week, the day after the books were printed, Labour’s leader stepped down. I had to make an insert for Andrew Little’s page, encouraging readers to download a Jacinda from the book’s Facebook page. 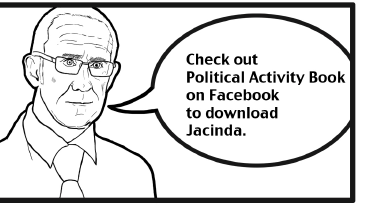 There is something for everyone in this book. Portraiture, political satire and the space to redesign the leader of your favourite (and least favourite) political party. 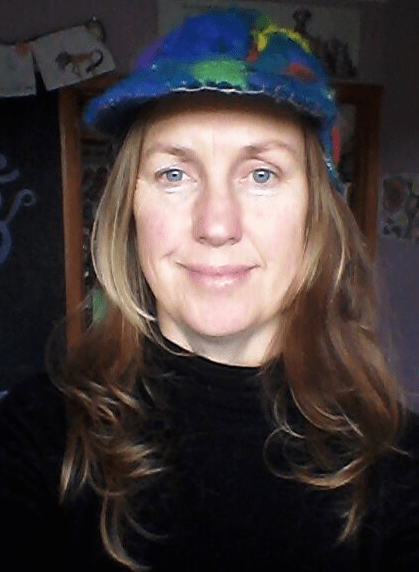 Rowena Fry is an advocate of showing some interest in these people who pass our laws as well as for the unrealised power of giving a damn. Rowena failed School C art spectacularly. She then went on to audition eight times for drama schools, made four attempts for design school and just once for broadcasting school. Eventually, she was accepted into design school and graduated in 2015. Tenacity. Just like Winston.