Kids can change the world: a 5-year-old takes on Palm Oil

Why don’t children get to vote? As far as I can see, they’re as capable of understanding what’s important about the world as many adults and they have a higher stake in the future of our society and world.

As I wrote in this manifesto for The Spinoff:

A classic Big Piece of Cheese episode of The West Wing gave compelling arguments for children to have the vote. Some contributors to this article suggested lowering the voting age considerably, plus giving parents a proxy vote for any children in their care below that age. Perhaps this would give more incentive for policy-makers to push out their horizon and make plans that consider the long-term effect on society.

Last weekend my five-year-old son demonstrated that the often black-and-white moral thinking of children can make them better qualified than adults to make big decisions.

Every school holidays SBJ joins in with a few different holiday programmes. His usual rotation includes Zealandia, Wilderkids (the Sustainability Trust), a gymnastics one, and Wellington Zoo. He loves them all, and insisted on being booked in every single day of the recent holidays. Like all the others he attends, the Zoo has a team of friendly educators who put on full days of animal and other activities, from making and delivering ‘enrichment’ for the animals to visiting the vet centre. The kids have the opportunity to learn a huge amount about real life stuff, including animal conservation and how our society’s habits impact it.

One afternoon he came home from the Zoo with a Forest Stewardship Council stamp on his arm, and told us we needed to make sure we only bought toilet paper that was FSC certified, so we wouldn’t be endangering animal habitats. (He was pleased to find we already did that.)

After another day at the Zoo, plus a visit to Auckland Zoo on holiday, he wanted to talk about palm oil.

He told me that palm oil plantations were taking over the habitats of some animals like orangutans, which are already endangered. He wanted to do something about it. My heart swelled.

I told him I agreed with him that it was a big problem. I said there were four things I could think of that we could do:

We talked about activism, and maximising our impact – that it would make a small difference if we avoided palm oil ourselves, but a larger impact if we worked to encourage other people to do that, and joined with other people to make systemic changes.

We have a person with a serious dairy allergy in our household, so SBJ is already familiar with checking ingredient lists – and with the difference in reliability of labelling regimes in the different countries we have lived in. So it was straightforward to explain that our labelling laws need to be better if we are going to be able to make good decisions about what we buy when it comes to avoiding palm oil.

Thanks to Auckland Zoo’s great resources, here’s how SBJ spent the rest of the morning:

We watched a couple of videos about the palm oil problem and read this Guardian article (full of pictures and infographics) together.

We looked up Auckland Zoo’s palm oil shopping guide (and recognised the unmistakeable illustration stylings of Giselle Clarkson!), and read about some of the terms companies might use in their ingredients lists that are actually palm oil. 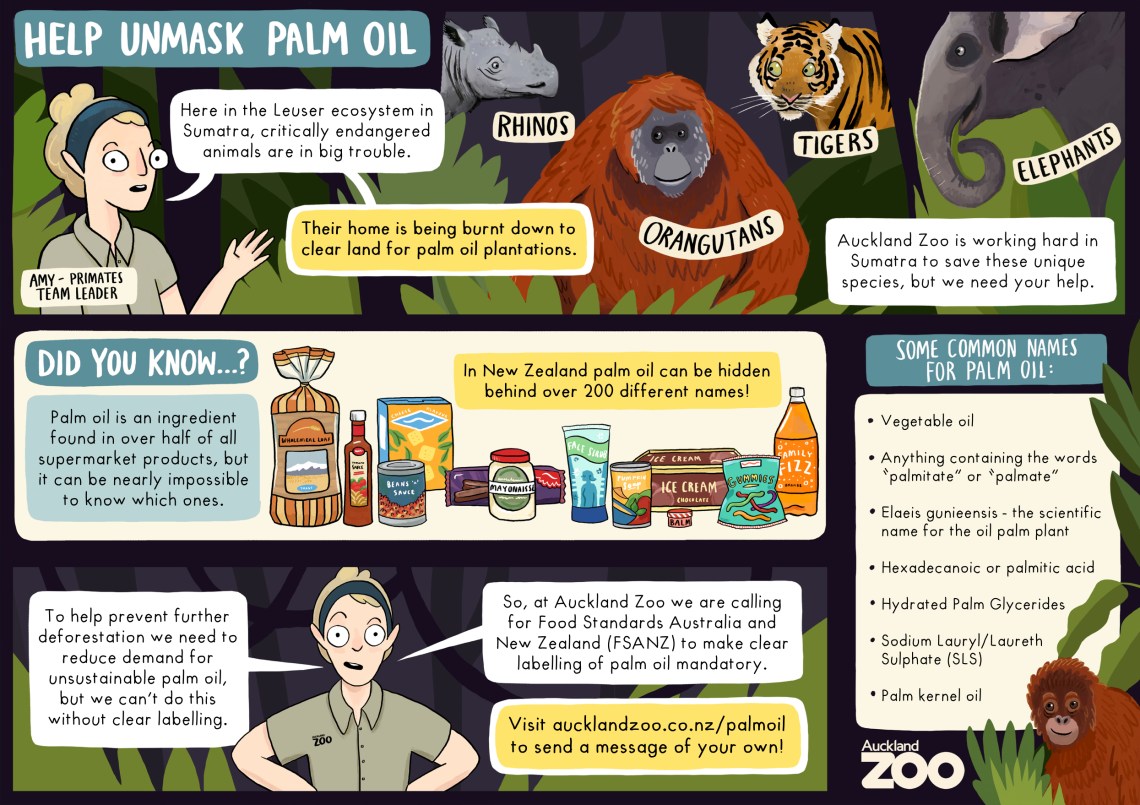 At this point, he was horrified.

He spotted in the illustration of groceries something that looked like his favourite lollies – snakes.

It wasn’t a question. He was resolute. And this is where I think kids have it over adults.

Our nuanced moral reasoning – and perhaps our greater control of our own lives –  means we are much more likely to act contrary to our beliefs. We know if we buy products containing palm oil we’re endangering wildlife, but the effort it takes to stop is too much for many of us, at least some of the time.

Not for SBJ. He loves animals, so he’ll give up lollies if necessary.

I told him the picture wasn’t of specific brands and we would have to check the ingredients of the things we normally buy – I’m hopeful he’ll still get the odd snake!

The he asked me to write down all the ingredients terms from the illustration, so I did, and he bounded off to the pantry. Every so often he would come back to me, holding a jar of peanut butter or a packet of bread, and we would squint at the tiny print on the label and check the ingredients together. 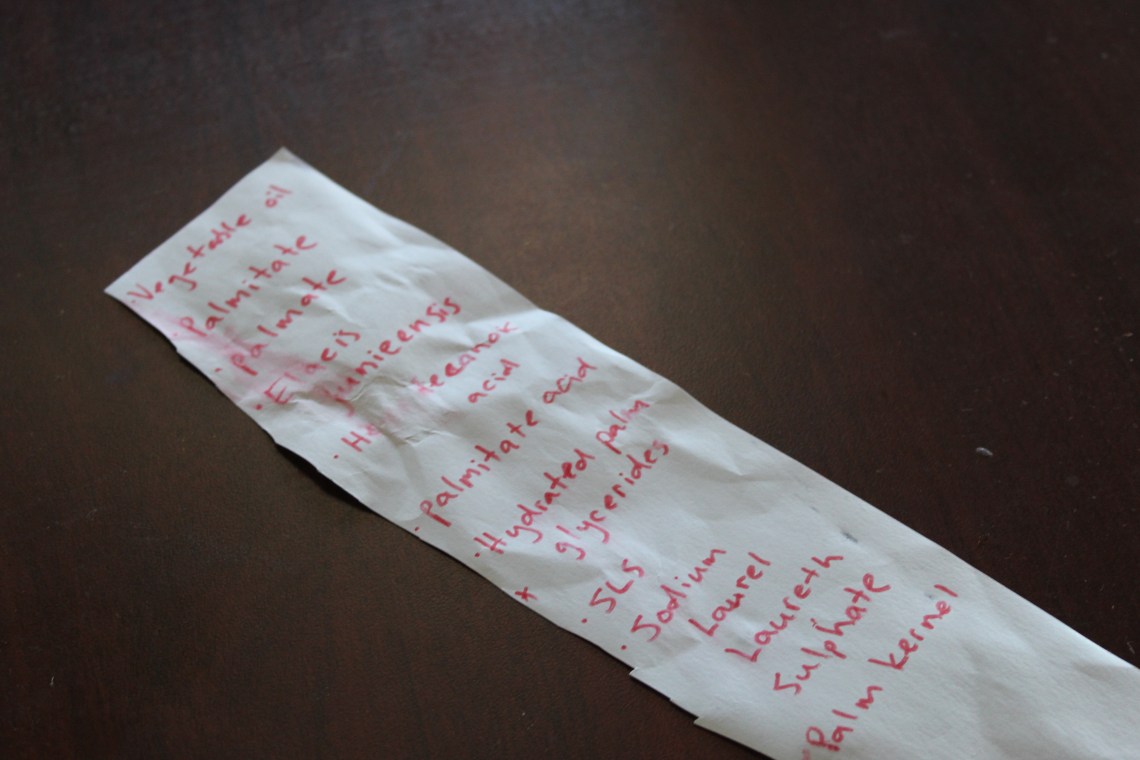 When we found the dreaded euphemism ‘vegetable oil’ on our margarine – which we buy because it’s dairy free – we went to the company’s website and found this statement on where their palm oil comes from, which I think is reassuring, but I was keen to learn more about how to interpret the marketing language in it.

While he was checking the pantry, I went on Twitter and shared and gathered more information. Microbiologist and science communicator Siouxsie Wiles responded saying her daughter Eve was similarly committed and had made this Lego stop-motion film about the issue.

At one point in the morning of activism, he asked me to call his friend, who is six years old, so he could make sure he knew all about this, ‘because he loves animals, too, so he won’t want to buy any palm oil.’ They had an earnest conversation about the issue. It’s the first time he’s used the phone for this kind of communication with a friend, so I’m not sure how effective it was, but I did love that he was so moved to share the news.

He has a list of friends he wants to talk to, and he’s sure they’ll all be on board. He’s probably right – they’re kids, and much more reliable about this stuff.

So, is anyone else keen to lower the voting age?

Kids can change the world: 6 ideas

The Maisy Test for sexism in kids’ tv shows and movies 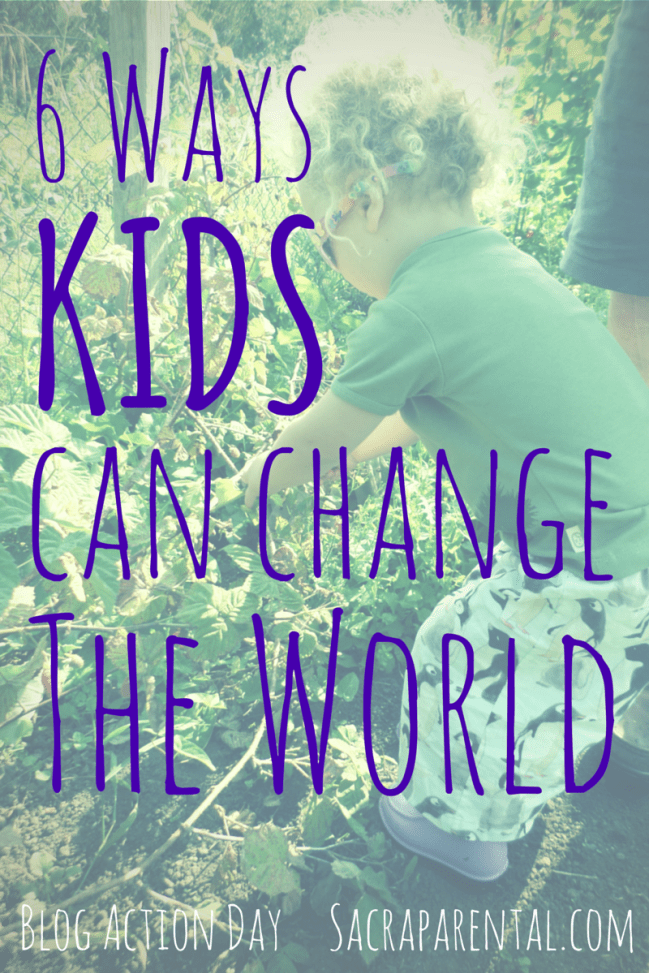 3 comments on “Kids can change the world: a 5-year-old takes on Palm Oil”