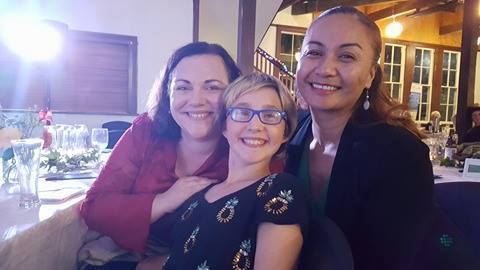 You might remember Jessica’s stunning speech on feminism, published here when she was nine years old.

This year for her school’s speech competition, she introduced her classmates to the idea of activism – and won! Here’s her winning speech, written just before the election, with an introduction just for us:

Hi, I’m Jessica Tuhua. I feel excited and privileged that my work is being published on Sacraparental again. I’m eleven now, and not much has changed about me other than my height.
This year I won my school speech competition. I wrote about activism. Activism interests me because there’s an awful lot of horrible stuff in this world, and activism is the way to change it. I’m lucky to have this life, and I want to use what I have to help people. I think every privileged person has a responsibility to do something to help non-privileged. It’s our duty. I don’t think kids should get out of that responsibility, because suffering kids don’t have a choice.
It’s not always easy to be unselfish and kind and make good choices. I find it hard myself. But everything takes practice.
Ngā mihi
Jessica

I had a good sleep last night, my bed is warm, my home is safe. My mum drove me to school dressed in clean(ish) clothes, with shoes on my feet and a belly full of Weetbix. This morning I whinged at my sister about whose turn it was to do the dishes. I have to do the most, it’s so unfair! AND she got the last yoghurt for her lunch! It’s so annoying that school starts so early. It’s so unfair that Ocean always bosses me around.

Mama’s watching the news, and the politicians are talking about some big issues in New Zealand and in the world. They say that there are dirty rivers to clean. They say that our country is only letting in 750 refugees per year, and Germany are letting in 800,000! Many people don’t have access to health care. Climate change is continuing to destroy the world. People are living in poverty. Children are starving. Workers aren’t paid fair wages. People all over the world, including New Zealand, are living on the streets. North Korea successfully created a new hydrogen bomb. Donald Trump is running America.  But that all seems so far away.  It’s not my problem. I’m way more worried about how unfair it is that Sebastian gets an X-box and I don’t. And I’ve been waiting forever to get a copy of The Slippery Slope from my favourite bookstore.

But what can I do? Those problems are huge. And I’m just a kid. I should just be happy and focus on my awesome life. I can’t fix that stuff anyway. Or can I?

And that’s where activism comes in. Activism is fighting for a cause you believe in. By fighting, I don’t mean attacking your siblings, or waging war on your parents!  I’m talking about fighting for change. Not the change you find down the back of the couch! Change that resolves a problem in the world. The activist is not the person who stands around complaining about something. The activist is the person who does something about it.

Activism is defined in many different ways. I will define activism in a simple equation. Empathy or outrage times action = activism. Empathy and outrage are very strong emotions, and cause people to act. I can prove this: when your siblings are annoying you, you feel very angry, and have a strong urge to act against them. This is actually a form of activism in itself, but maybe not the best type! The other day someone who passionately believes that 1080 poison is ruining the environment, threw rat poison in Nick Smith’ face.  There are groups of men called Men’s Rights Activists who feel threatened that women are gaining equal rights, so they spend time online threatening and bullying women activists.

As you can see, not all forms of activism are good or worthwhile.

But without activism, nothing changes. Some things are worth fighting for. Being passive means you are part of the problem.

Fifteen-year-old activist Malala Yousafzai was shot by the Taliban because she fought for her education when the Taliban took it away. Thankfully she survived. She wrote a book called I am Malala, which is the story of her activism. Malala is currently fighting for female education in countries where girls aren’t allowed to go to school.

We had an election a while ago. Did you know that just over a hundred years ago, your Mum wouldn’t be allowed to vote?

The suffragists changed that, they were feminist activists. They fought for women being allowed to vote in elections. In those days, only men could vote. The suffragists were killed, tortured, and imprisoned because of their courageous fight. These amazing women got what all women needed- they are the reason your Mum gets to vote in elections today.

There are activists all over the world. Do you want to become one too? We can fight for anything we believe in and care for. To become an activist, a great start is to attend public rallies and meetings about things you think can make a great change in the world. Yes, just going to a rally about something can make a profound difference to the world, because if there were only a few people out there making a stand their voices and opinions wouldn’t be heard.  But if thousands of people were out there shouting the same belief and care, they will be heard.

Think. What’s important about the thing you believe in and care a lot about? What could make that thing better than it is right now? Read books, watch the news, ask questions, pay attention. Just because life is great for me and you, doesn’t mean we should sit on our butts and laze. We need to make life good for everyone. In the words of one of my greatest role models: Let’s do this! You can leave encouraging remarks for Jessica in the comments below.

You can also keep up with Sacraparental via Facebook for daily snippets, Twitter for general ranting and raving and Pinterest for all sorts, including a Change the World board.

You might also want to check out these posts on activist subjects:

Picture books for kids who want to change the world

Protest songs for kids and adults

A five-year-old takes on palm oil

5 comments on “Jessica, an eleven-year-old activist”