Has anyone been wondering about seeing The Star with kids? It’s a new animated Nativity story, with lots of Hollywood voice talent, and some funny moments.
It’s also stuck in the 1980s when it comes to portrayal of women, casting and content. Sigh.
I went today with my son and friends, so here are some bullet points to help you decide whether it’s for you.
First up, here’s the trailer, so we’re all on the same page:
https://www.youtube.com/watch?v=tVgQuZf5o1M

The Star is a Biblical Movie – sort of

The Star is a fairly standard biblical adaptation of the Matthew and Luke stories of Jesus’ birth, with some imaginative license thrown in.
If you know the story well, you’ll follow all the key plot points, and it goes slowly and obviously enough to help children follow along, too. We were the only people in the cinema, so we were able to do commentary along the way for the two six-year-olds with us.
It was a bit hard to explain why Joseph was contemplating divorcing Mary, but luckily he changed his mind soon enough and the story moved on!
If you’re a fan of the biblical narrative, you won’t have big theological objections to how the outline of the biblical plot is presented. The most common fudges are present: three wise men when the number isn’t specified in the biblical text; wise men appearing in the stable, rather than a couple of years later.

The star of The Star is an abused miniature donkey called Boaz who Mary and Joseph adopt when he escapes the cruel miller who has had him tied up to grind grain for his whole life.

Boaz has dreams, y’know. He and his buddy, Dave the dove, want to run away to join the Royal Caravan, full of posh horses in golden reins, and get their share of some glory.

But when they discover that Mary is in danger (more about the danger in a moment), they have to decide between glory and friendship. They make a good choice, and there’s plenty to talk about with children after the movie.

There’s also a moment near the climax that was really striking to my son, when the donkey has the opportunity to save his enemies – and does. I think that scene, and its aftermath, will be what stays with me, and hopefully my son, most from the movie. I’ll be reminding him about it tomorrow, for sure!

There’s also a plot thread about how Mary and Joseph each cope with the responsibility God has given them, which is nicely handled.

Several characters have challenges and dilemmas along the way, and make difficult, honourable choices.

Herod and his henchman are a big part of the movie, so there’s a clear set of baddies who give moral contrast.

When I was a kid, in the 80s, Smurfette was the only female character in her whole show. Can you imagine writing that show and thinking that was acceptable?

Plenty of other writers are still doing the same thing, and The Star isn’t much better.

The Bechdel Test (does the movie have two female characters who speak to each other about something other than a male) is sarcastic. It’s a pathetically low bar, and if a movie doesn’t pass it, then shame on it.

I’m sorry to tell you that The Star doesn’t pass. The only conversation between female characters I can recall in the entire movie is when Mary and Elizabeth talk about how Mary is going to break the news of her pregnancy to Joseph. For one minute.

The Star doesn’t pass the Maisy Test either:

Gender Balance: Only about a quarter of the speaking characters are female, and given that most of them are fictional, and animals, there’s just no reason at all that this should be the case (I mean apart from unconscious sexism. No good reason.)

Now imagine writing that scene with gender balance in mind. Sure, a king’s a king, but he could have some female members of his family and court present, couldn’t he? Given the status of Deborah the Prophet in the history of Israel, maybe he could have had some female advisors? The henchmen and his dogs are fictional, so there’s no reason they all have to be male. The camels likewise. Why two male, one female? The Bible speaks of ‘magi’, and sure, they were most likely male, and are never enumerated (there may or may not have been three of them), but  since we’re happily adding a talking donkey to the mix, I’d be tempted to have a delegation of wise men and women coming from the East, myself. 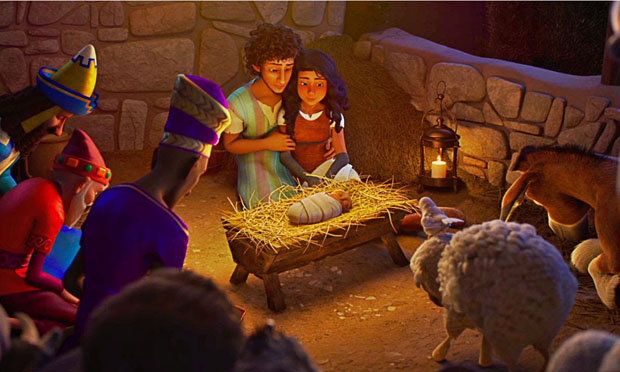 Gender Freedom: I’ll be interested to hear other people’s opinions on whether The Star should pass on this heading or not. On one hand, it’s set in a strict patriarchal society, to the extent that all women’s heads are covered. On the other, Mary and Joseph have a fairly modern relationship dynamic. He picks up dishes after their wedding party, she gives wise advice, and they generally rely on each other to get through the challenges ahead of them.

Gender Safety: I did like that Mary was a normal human being, pretty without being a princess, and with a realistic-ish figure. She’s no Disney princess, thank goodness. She’s a wise and strong woman, ready to walk to Bethlehem at nine months pregnant, with a much better attitude than I would have! But there’s a big fail, which I’ll deal with under the next heading.

Social Justice and Equality: Here’s the biggest problem: the camels are sexist, ableist bastards. There are three camels, one for each wise man. Two are male and one is female (Oprah Winfrey, no less!).

One of their schticks is that they have different guesses about what’s going on, what the star signifies, and so on. Oprah is always third to guess, and she’s always the one whose guess is – as Bible readers in the audience know – correct. The ‘funny’ bit is that after her guess, the two male camels fall over themselves laughing at her and calling her ‘crazy’ for having such ridiculous ideas.

They use ableist language, are nasty about her, and basically camelsplain her to death. It’s very frustrating to watch, and so unnecessary. She calmly carries on, like so many women are socialised to do, in the face of this provocation. It’s not what I want children to see in 20-flipping-17.

The Star is WAY more violent and scary than advertised

Before I decided to take my son to The Star, I read several reviews, checked out the Common Sense Media rating (5+), and watched the trailer, but I feel misled about the suitability of the movie. Common Sense’s summary is ‘Sweet Nativity story told from animals’ perspective,’ which makes it sound like Room for A Little One come to life. It’s not.
In New Zealand The Star has a G rating, the lowest possible, which means it’s suitable for any child. For context, half of the animated shows aimed at young children on Netflix have a higher than G. Heaps of animated stuff is rated PG (parental guidance recommended) because it’s too scary for little kids – and The Star should definitely be in that category.
There’s quite a lot of physical slapstick cartoon violence, like animals falling off cliffs, wagons colliding and smashing apart, pots breaking over people’s heads, and so on. There’s also a surprising amount of actual mortal danger, with scary music to match – sharp knives flying menacingly through the air, a fire starting inside a barn, actual assaults, and more. None of that, except the existence of the dogs, is in the trailer.
And this is the thing that none of my research revealed to me: the whole story revolves around Herod’s terrifying henchman chasing Mary with a sharp sword and two slavering dogs. I had two sensitive (but not extreme outliers) six-year-olds with me and it really was too scary for them. I would never have taken them if I’d had an accurate picture of the content.

I suspect Americans, and people of colour, might have more to say about race in the voice casting, and I will leave that to them – it’s a complex matter, especially as so many of the characters are not human.
I’ll say that the humans all have appropriately dark hair, but Mary has flipping blue eyes! I did like that she looked like an average person, not a Disney princess. Oh, and the female camel has, wait for it, pronounced eyelashes. Eyes to the ceiling.
Overall, I think this is a lost opportunity kind of movie. None of the dodgy stuff was remotely necessary – and none of it is acceptable in the 21st century.
There’s a lot of good, meaty, positive stuff going on in the character arcs, but for me it was drowned out by the sexism – and by the sound of my son and his friend diving into the back of the theatre chairs to cover their eyes and ears during the dozens of scary scenes.

Click through to find out more about The Maisy Test, and 13 great shows for little kids that actually pass it.

And please consider this a warm invitation to follow me on Facebook for daily links, resources and Sacraparentalish tidbits, on Pinterest for link-plantations (including these Gender Politics and Change the World boards) and on Twitter for a range of ranting.