Just in case you are under the impression that I, the Self-Appointed Patron Saint of Lent Resources for Kids, am currently utterly absorbed in meaningful, transformative Lenten practices with my small children… think again.

I’ve managed a few things, but good golly, not a very large percentage of all my wonderful ideas for households.

As is so often the case, I started with a hiss and a roar with a Pancake Party, this year for my daughter’s class of new entrants. Ten five-year-olds, their parents and siblings (and then half the rest of the school once the bell rang) got together for pancakes on the last day before Lent begins.

First off, I need to say it was FABULOUS. The kids were super excited, for days leading up to it. Their teacher runs a play-based classroom, so the whole day was spent on pancake maths, pancake art, pancake literacy, and finally, pancake teamwork as we actually mixed the batter in the classroom, in chaotic teams of five. I even carried on my own Mum’s tradition of pancake letters for all the kids’ initials, which was a huge hit (despite my rather uneven and wobbly Rs, Bs, and Ms). 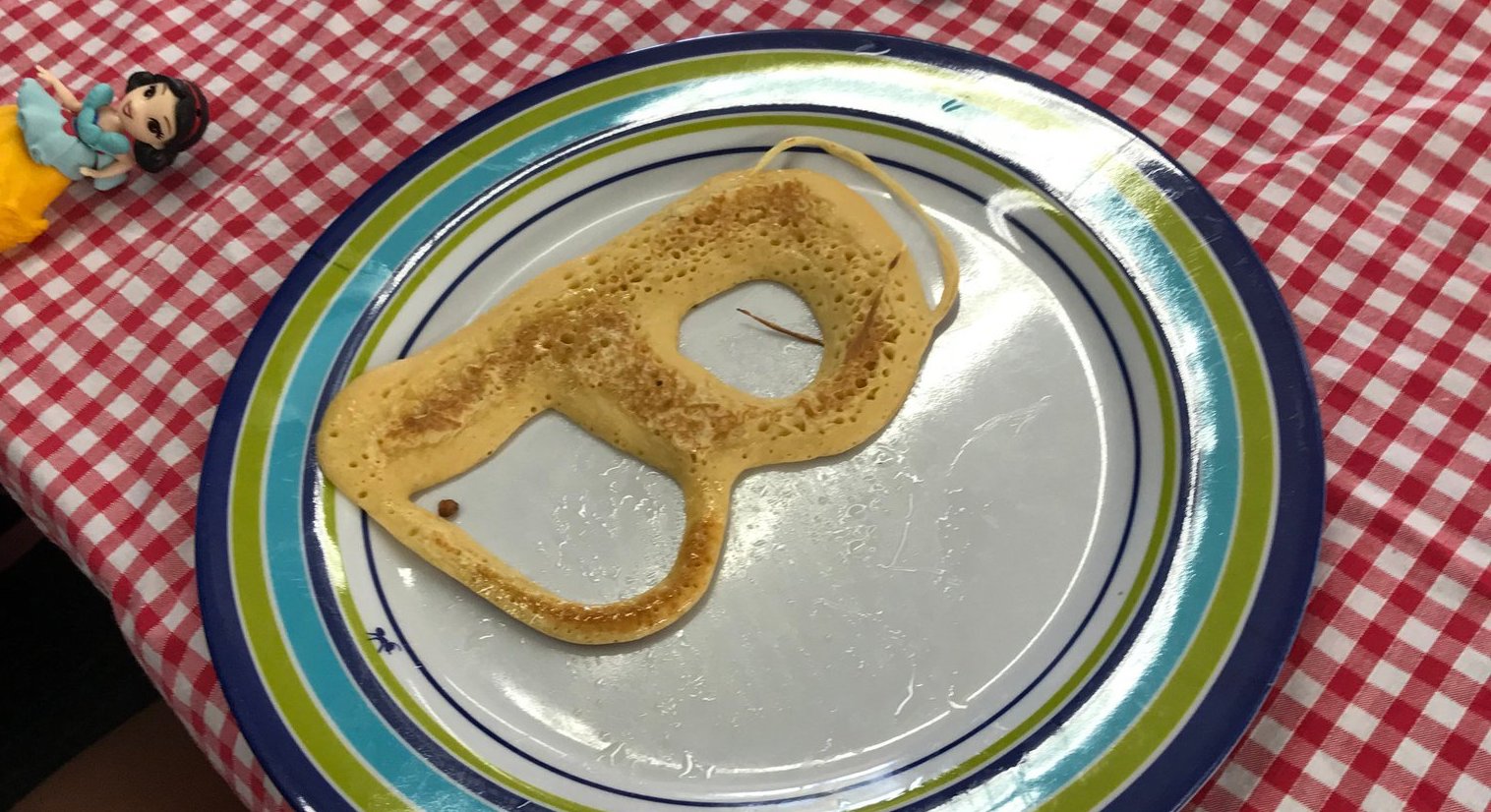 But it was also far from perfect, in a perfectly imperfect way.

Here’s one funny thing: if kids ask you why we eat pancakes on Shrove Tuesday, no Western Christian – Catholic or Protestant – can tell you anything that makes actual sense. The reason, as many of you will know, is that Lent is traditionally a vegan and fat-free fast, so you would make pancakes to use up all the dairy, eggs, and oil in the house, cleaning it up for Lent.

Here’s the thing, though: at our Catholic school, I’d bet you a dozen eggs that not a single Catholic is doing a vegan fast for Lent – it went out of fashion decades ago in the Catholic world.

And here’s the funnier thing: about half our Catholic school families – and most of the families in this class – are actually Orthodox, from Iraq, Ethiopia, and Eritrea – and they do fast. Like, properly fast. So they totally get why you would eat pancakes before Lent. But try explaining to the Orthodox mums that we’re doing pancakes because of, you know, fasting – but that actually no one will be fasting from tomorrow. They were amused and gracious, bless them.

But there was one more snag.

Orthodox Lent lasts longer than Western Lent, so all our Orthodox families gave up eggs and milk and oil days before Shrove Tuesday.

Luckily, I did know this, and made sure we had some nice fruit for those parents who were fasting (well over half the class), but next year, I think we’d better do Shrove Tuesday a bit earlier!

I also spent most of the pancake-mixing time comforting (or not comforting) my distraught five-year-old, who was suddenly not at all keen on sharing a) her mother and b) all baking privileges with a bunch of other five-year-olds who all wanted turns at stirring and pouring, too. How very dare they!

Anyway… by Tuesday evening, we were emphatically not having pancakes at our house.

I did manage to get the 7-candle candelabra down from on top of the kitchen cupboards and dust the cobwebs off it.

I looked for a Bible story book that had the first Lent story – the Temptation of Jesus – and felt a bit queasy at the idea of introducing the little one to the idea of Satan, but I really didn’t have the headspace to improvise further at this point, so we went there.

I was on firmer ground with the candles: this is my baby, right? We said, ‘the first Lent candle reminds us that Jesus is wise,’ lit it, and prayed for wisdom.

At that point I realised that two years ago – or maybe three?! – the little one had systematically pulled the wicks out of half our Lent candles. That’s why they were still so beautifully intact. And useless.

I still haven’t got around to finding replacement ones. Sigh.

So we’ve lit the candle ONCE in two weeks. We have read more Bible stories than we had been lately – and the kids are super keen on them (see, you just slack off for a while and leave them wanting more…) and tonight I read the Transfiguration story from the excellent kids’ collection of stories my grandparents gave me for my sixth birthday. The kids enjoyed remembering the names of Jesus’ besties – and figuring out, with their dad, that their grandpa and his brothers shared the names of Jesus’ inner circle. And we talked (again) about bravery.

That’s a good news story. Years of this slow, steady, repetitive kind, wise, brave, and joyful stuff is paying off, for sure. Our kids totally get that being brave is about feeling scared and doing the right thing anyway. And that it’s often necessary when you feel like you need to speak up and you worry about what your friends will say. If only adults were as self-aware and understood their need for bravery, eh?

I think what I’m saying is that just a little Lent can be all you need.

It’s not about reaching a standard of perfection, after all. We’re not trying to fast perfectly, or even pray with perfect consistency.

Lent, like the rest of life, is about taking the next small, hard step toward Jesus. And then the next one.

For all my Lent and Easter resources, head to this comprehensive index.

One more thing: my writing on Sacraparental is supported by generous patrons through my Patreon account. If you find my Lent articles thoughtful and useful, and would like to support me to write more stuff like them, head on over. You can leave your suggestions, vote for what the next article will be, and make my writing possible. Thanks!

2 comments on “Just a Little Lent”